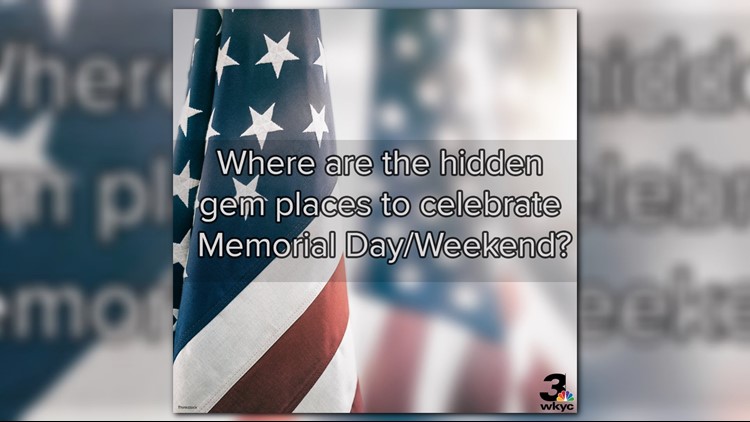 GUIDE | What to do in Northeast Ohio for Memorial Day 2018

The weather in Northeast Ohio finally seems to be reflecting the seasons.

And it's not a day too soon as holidays typically spent outdoors are arriving!

First up is Memorial Day, also known as Decoration Day, which honors and remembers those who have died while serving in the country's armed forces.

Memorial Day is celebrated each year on the last Monday in May.

We asked you all to weigh in with your favorite Memorial Day activities, but no wanted to share their secrets.

That was disappointing, but check out our hot list of things to do this Memorial Day Weekend.

Many Northeast Ohio communities are planning parades or observances on Monday. Here's a list:

Bay Village: The parade will step off at about 8:45am from Huntington Park and march West on Lake Rd to the Lakeview Cemetery for services and recognition of the city founders that served early for our country. The parade will reform on Lake Rd and march East to Cahoon Rd. and turn South to end at the Gazebo.

Bedford: The parade travels from the City Hall to Broadway Ave. to Bedford Cemetery starting at 10:15 am.

Berea: Parade will step off at 10:30 a.m. from the municipal parking lot at Coe Lake. The parade route will proceed past the Post Office, down Bagley Road to Front Street and the Triangle. A ceremony will follow at McKelvey Park in the Berea Commons. The Parade is sponsored by American Legion Post 91.

Broadview Heights: The parade will gather at The Crossings Shopping Center at 10:30 a.m. on West Royalton Road and step off at 11:00 on Broadview Road, just north of Route 82.

Brook Park: American Legion Post 610 Parade will kick off at 10AM from the Brookgate Shopping Center between Hummel Rd. and Snow Rd. From there it will head south on Smith Road to Sylvia where it will make a right to head west on Sylvia. The Parade will end at Kennedy Park where Memorial Day Ceremonies will be held.

Cleveland: Festivities take place starting at 10:30 a.m. at the Garfield Memorial and include a spirited parade, a rousing keynote speech, and a Sousa band concert. Picnic baskets and lawn chairs encouraged.

Fairview Park: Ceremony at City Hall at 8 a.m., followed by parade at 9 a.m. at the American Legion Clifton Post on Brookpark Road.

Lakewood & Rocky River: Parade starts at 10 a.m. at Rocky River High School and travel west on Detroit Road to Lakewood Park Cemetery, where a ceremony of remembrance will take place.

Shaker Heights: The parade travels along Van Aken Blvd. (in the westbound lane) and ends at Thornton Park starting at 9:00 a.m.

Strongsville: VFW Post 3345 will present the annual Memorial Day parade on Monday, May 28. The parade will step off from St. Joseph Church, 12700 Pearl Rd., at 11 a.m. and travel south on Pearl Road to Zverina Lane, then to the Freedom Trail Gazebo, where a short ceremony featuring Mayor Tom Perciak and other local dignitaries will take place.

University Heights: The parade steps off at 11am on the corner of Silsby and Warrensville Center. The parade proceeds down Silsby to South Belvoir and concludes at John Carroll University.

Westlake: The parade starts at 10 am and travels from Sts. Peter & George Coptic Orthodox Church located on Hilliard Blvd. to the end at Clague Park.

Chardon: Parade starts at 10 a.m. at Park Auditorium and ends at the Municipal Cemetery.

Kirtland: Parade will step off at 10 a.m. from Kirtland High School, proceed south on Route 306, and conclude with a ceremony at the Kirtland Veterans Memorial located between the library and City Hall.

Mentor: Step off for the parade is at 9:30am and follows Mentor Avenue to Hopkins Rd. to Mentor Cemetery. The ceremony at the cemetery starts at 10am.

Painesville: The parade begins at 10am at Riverside Cemetery

Avon: Parade starts 9 a.m. Monday at the Senior Center, traveling east on Detroit Road to state Route 83. A ceremony will follow at the memorial at Route 83 and Detroit Road.

Elyria: Parade steps off at 10 a.m. and will begin at Court and Broad streets; goes east on Broad to Washington Avenue, north on Washington to Harrison Street, east on Harrison to Glenwood Street.

North Ridgeville: The parade travels from the Senior Center down Bainbridge Rd. to the Academic Center beginning at 9:45 a.m.

Brunswick: Program starts at 10am at the Visintainer School grounds, followed by a parade that will begin at 10:30am and proceed to Westview Cemetery.

Aurora: American Legion Ceremony begins at 9:30am followed by the parade, which steps off at 10am.

Canton: Parade steps off at 10am at the former Timken High School and continues down Tuscarawas St. W to Elgin Ave. NW to Seventh St. NW and finishes at McKinley Monument.

Akron: There will be a service at Greenlawn Cemetery at the Veterans Monument between the two mausoleums. Rifle salute, taps, laying of wreaths at base of flag by Kenmore American Legion Post.

Hudson: The American Legion Family Memorial Day Parade will step off at 10am from Milford Rd and will conclude with a service at Markillie Cemetery.

Tallmadge: The parade steps off from the Our Lady of Victory Church parking lot beginning at 9:30 a.m. and ends at Tallmadge Cemetery