New York's statute of limitations would block either a criminal prosecution of Spacey for attempted statutory rape or a civil suit from Rapp because the alleged encounter is now 31 years old. 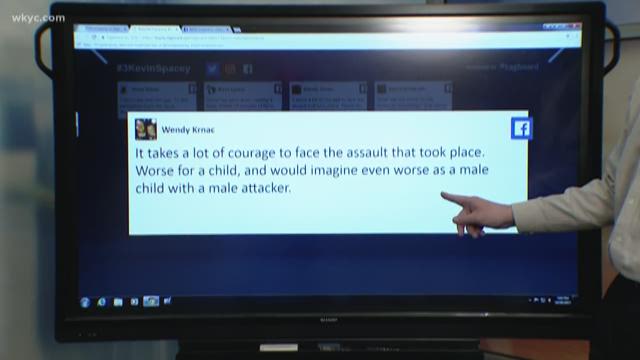 Kevin Spacey's apology for making sexual advances on then 14-year-old actor Anthony Rapp in 1986 does not leave him legally exposed to prosecution or a civil suit today under New York law, legal experts say.

"The accuser is barred from any type of civil action against Spacey and likewise, no criminal prosecution could be commenced for the same reason," says New York defense attorney Stuart Slotnick.

Cohen says New York's statute of limitations would block either a criminal prosecution of Spacey for attempted statutory rape or a civil suit from Rapp because the alleged encounter is now 31 years old.

"It was an extremely well-crafted and well-lawyered statement," says Cohen. "(Spacey) would not have said anything (of an inculpatory nature) without knowing the answer to that question."

Spacey issued his statement via Twitter in response to an accusation from Star Trek: Discovery actor Rapp told BuzzFeed late Sunday that a drunken Spacey made a sexual advance toward him after a party in Spacey's New York apartment when Rapp was 14 and Spacey was 27.

Spacey said he was "beyond horrified" to learn of the accusation, and said he didn't remember the encounter. But he apologized for his behavior.

"I owe (Rapp) the sincerest apology for what would have been deeply inappropriate drunken behavior, and I am sorry for the feelings he describes having carried with him all these years," he wrote.

Spacey then acknowledged, for the first time, that he has had both male and female lovers but now chooses to "live as a gay man." Cohen said it appeared Spacey likely intended this acknowledgment as a "distraction" from the underlying accusation.

"It's really rather clever," Cohen said.

Although there is no statute of limitation in New York on actual rape, adult or child, that is not the case for attempted statutory rape, Cohen says. Under the law, Rapp would have had to press criminal charges or file a lawsuit within five years of reaching the age of majority, 18.

"If the accuser is below majority, the statute would extend until he reached majority, and as long as it's a one-off (encounter) and not part of a course of sexual misconduct against a child, it would be a five years after that," Cohen said.

Cohen said such statutes are not aimed at preventing accusers from suing or at protecting child molesters.

"They're designed to make sure the evidence is sound, that memories haven't faded to such an extent that people are not making them up as they go along," Cohen said. "That's something fundamental people are forgetting as they rush to instantly believe an alleged victim and want to change all the laws" to make it easier to charge or sue.

Could an aggressive prosecutor or a clever lawyer bring charges or a lawsuit anyway? Sure, Cohen says, but judges are certain to say: "Too old."

"I am not putting aside the possibility that a clever lawyer might be able to assemble the recent cases and statutes and legislative history, etc, and try to find a path through to identifying another cause of action...but no matter how you do the math, it's not going to work."