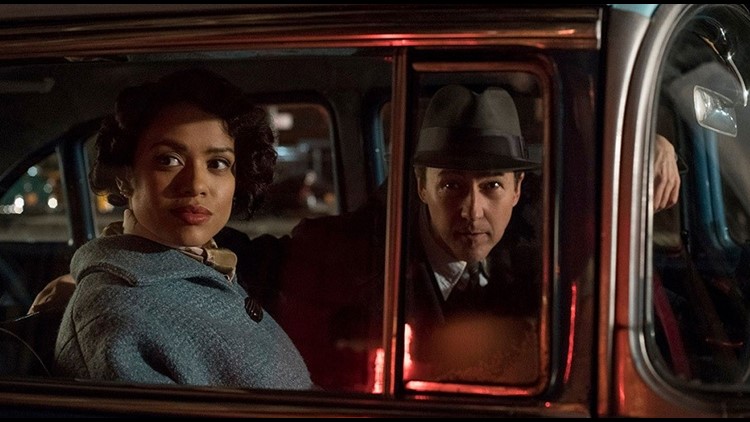 Photo by: TIFF
Gugu Mbatha-Raw and writer/director Edward are two of the stars in 'Motherless Brooklyn.'

TORONTO, ON — The 44th annual Toronto International Film Festival starts Thursday with an assortment of public screenings, including the world premiere of “Once Were Brothers: Robbie Robertson and The Band.”

Still, the movie-adoring audiences shouldn’t be surprised if one of their favorite reviewers shows up in a dark theater wearing shades after last night’s 11th annual Toronto Film Critics Association cocktail bash at the mostly Mexican-flavored Milagro restaurant.

Certainly, the party was another bona fide smash – literally and figuratively – since it was created to welcome the hundreds of visiting press in town to watch movies for most of the next 10 days.

And again for the sixth straight year -- in between toasts and tacos – yours truly managed to ask some of our Canadian hosts quite informally: “So, what have you seen so far that’s really good?”

With a general retort that went something like, “You do know that they don’t show us as many films before the festival as they used to, right?” leading the way, three movies actually were mentioned twice each.

RELATED: The whole ‘Band,’ including fans and celebs, will return to Toronto for 44th film festival

RELATED: We’ll be sure to let you know if Zazie Beetz or Gael Garcia Bernal steal star-studded TIFF 2019

They were, in alphabetical order, “The Lighthouse,” “Motherless Brooklyn,” and “Parasite,” emerging from an assortment of Canadian and foreign-language films and “Midnight Madness” movies that apparently aren’t afraid to show themselves to local critics before the real party begins.

Freelance legend Bonnie Laufer Krebs was one to embrace “The Lighthouse,” the psychological thriller from director Robert Eggers (“The Witch”) and starring Willem Dafoe and Robert Pattinson.

“I’m not getting a lot of off-site screening notices these days,” Krebs said, “but I did see that and it was disturbing as hell, with amazing performances from both guys. Just remind me never to accept a job as a lighthouse keeper.”

Jim Slotek, most recently a founder of the popular “Original Cin” Web site, agreed with her assessment but chose “Parasite” as his favorite film so far.

“I mean, you have to go with (Korean director) Bong Joon-Ho,” Slotek simply said about his choice, already the winner of this year’s Cannes Palme d’Or and the latest from a master craftsman who has become a TIFF favorite after bringing three previous movies to the festival.

Norm Wilner, NOW magazine’s senior film writer and a guy who already has seen an astounding 30 of this year’s films (“most of them Canadian”) also is a big “Parasite” supporter.

“It truly is the best thing I’ve seen,” Wilner said, “though I really got a kick of a Spanish film in the 'Midnight Madness' section called 'The Platform.' It really knocked me out.”

“It’s a kind of murder mystery that many viewers might appreciate,” Braun said.

Among some one-mention wonders were a host of Canadian films, including world premieres of “The Twentieth Century,” “Coppers,” “Black Conflux” and “Anne at 13,000 ft.”

The latter film became the quick choice of the dean of Toronto film critics, Peter Howell, the Toronto Star veteran who doubles as president of the TFCA group.

More on all the films mentioned above can be found at tiff.net and be sure to return here Friday for details of Opening Night festivities.