Meyer, who is also the executive producer of 'The Enormity of Life,' talked one-on-one with 3News' Dave "Dino" DeNatale. 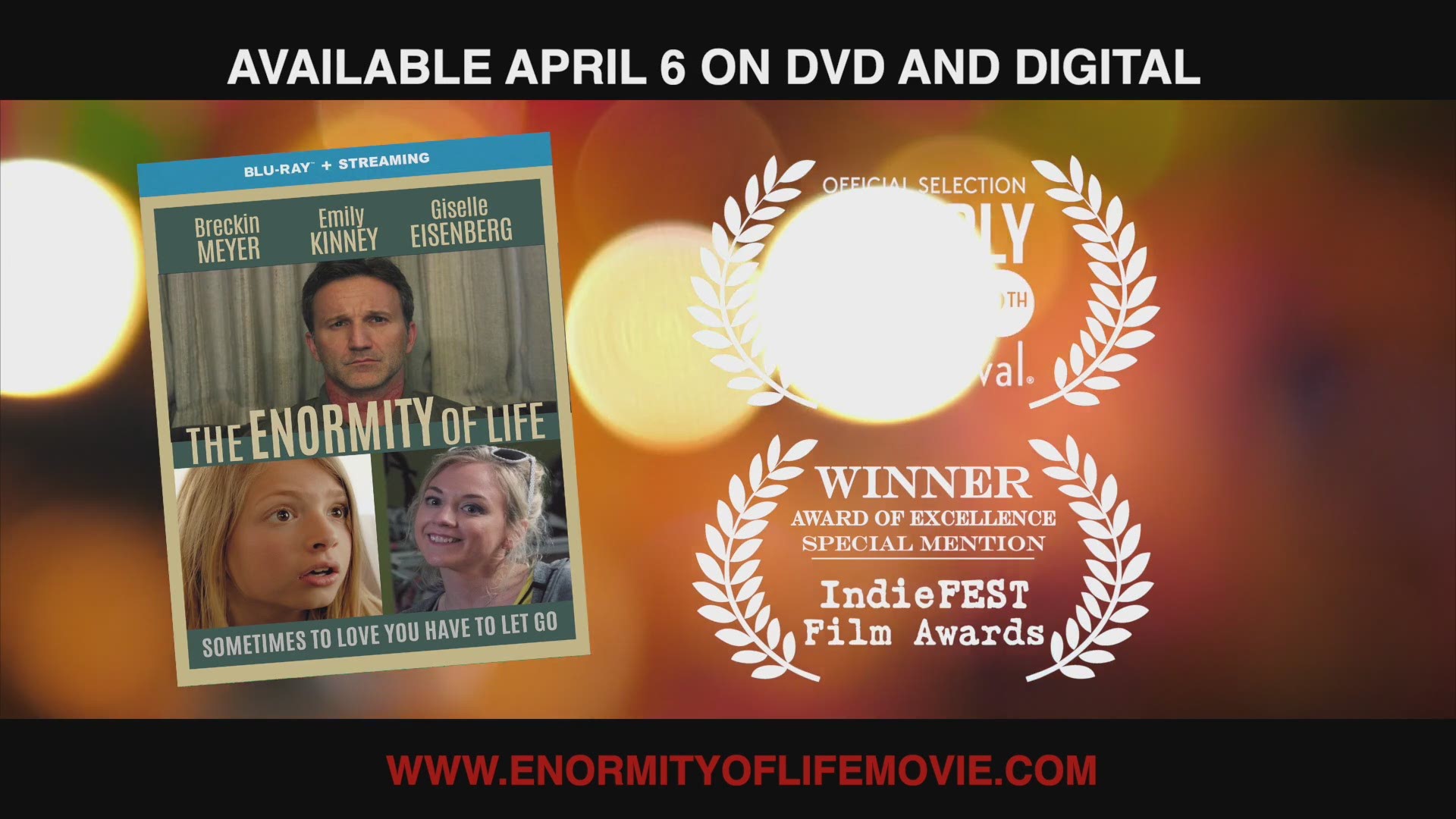 CLEVELAND — Cleveland is once again in the motion picture spotlight with the release of the new film "The Enormity of Life."

Written, directed and produced by Cleveland-area native Eric Swinderman, "The Enormity of Life" was shot on location throughout Northeast Ohio in the spring of 2018, including Middleburg Heights, Lakewood, Elyria, Beachwood, Lorain, Cleveland, North Royalton and Medina – with sites varying from private homes to hospitals to diners.

"The Enormity of Life" will be available on Apple TV, Google Play, FandagoNOW and Vimeo On Demand on Tuesday, April 6. You can also catch it on DVD.

Breckin Meyer stars as Casey, an emotionally despondent man on the brink of suicide who unexpectedly receives a large inheritance and meets a quirky single mother (played by Emily Kinney) and her eccentric young daughter (played byh Giselle Eisenberg).

Meyer, who also served as the film's executive producer, has an impressive resume of film and television credits, including Road Trip, Clueless, Garfield: The Movie, 54, and Robot Chicken. But playing the role of Casey was something completely different.

"I've had friends and family who have suffered through various mental health issues, but in Casey's case he has anedonia, the inability to feel pleasure in anything. I researched that and read a lot about people who suffer from it. It's a different form of depression. They're trying to feel and it was interesting to try to find those levels," Meyer says.

The film is described as "a tender comedy about misery and a heart-wrenching drama about the things that make us reluctantly laugh." Thinking about that contrast, Meyer is curious what people will take away when they watch "The Enormity of Life."

"This movie is a very different film, especially now with sensitivity and cancel culture and people not knowing where exactly to stick their neck out," explained Meyer. "It is a polarizing film, and I mean that in a good way, because hopefully it does leads to conversation and lead to investigation about this type of ailment. But it's a tough movie to watch in some ways. 'The Enormity of Life' is a big subject!"

So how did Breckin Meyer like filming in Cleveland? "I didn't have a tremendous amount of time to do much because of work. But I did go to the Rock & Roll Hall of Fame, I did get to see the Cavs play in the NBA Finals with LeBron, which was super exciting. We had a great time there, I wish I could have done more."

Not suprisingly, Meyer said he did like the food in our area, including the ice cream.

In addition to its release on Apple TV and other streaming services on April 6, there will also be a VIP public screening with limited seating and social distancing in place at Atlas Cinemas on Lakeshore Blvd. in Euclid at 6:00 p.m. Meyer, Kinney, and Eisenberg will do a live virtual Q&A after the screening along with the filmmakers. Click here for ticket information.

You can watch our full interview with Breckin Meyer in the player below: