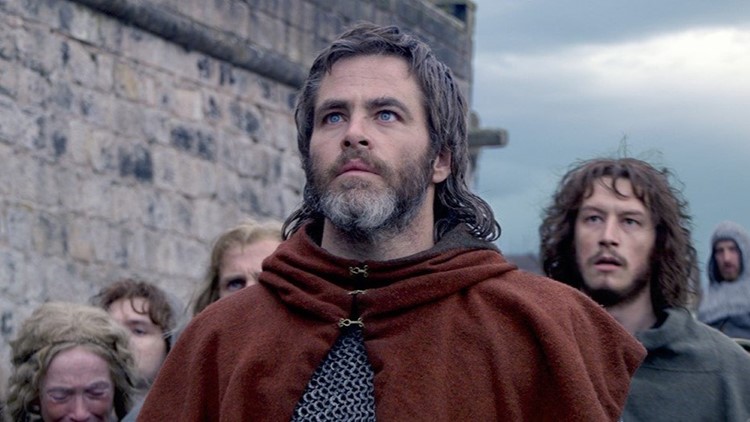 Chris Pine is the 'Outlaw King.' (Photo courtesy of TIFF).

TORONTO -- For days, TIFF and media outlets had been touting that recording artist Aubrey “Drake” Graham had joined forces with film distributor NEON to introduce a 9 p.m. showing of the film, Monsters and Man. Instead, the popular rapper only appeared on screen before the movie with an apology to a disappointed audience at the sold-out TIFF Bell Lightbox complex, explaining “I’m touring right now.”

“I’m just excited to be part of a movie that continues conversation in this day and age,” Drake added in the brief video that came up after five members of the movie’s cast, including John David Washington (from “BlacKkKlansman”), had been introduced on stage.

As written and directed by debut helmer Reynaldo Marcus Green, Monsters and Men tells the thoughtful, occasionally volatile and well-paced story of a Brooklyn community reacting to the police shooting of an unarmed black man.

Green’s film, which opens in New York and L.A. on Sept. 28, earned a Special Jury Prize, at January’s Sundance Film Festival. And oh, by the way, the absence of Drake didn’t seem to diminish the enthusiasm of a raucous and overflowing crowd enjoying the Opening Night party outside the theater areas in the spacious Bell Towers.

Earlier in the evening, the sweeping and nice-looking Outlaw King, which premieres Nov. 9 on Netflix, opened TIFF at two other festival venues. Both showings were preceded by a video tribute to TIFF Director and CEO Piers Handling, who is stepping down after 25 years. (Handling was visibly moved when introduced before the 6:30 p.m. screening at the Princess of Wales Theater.)

Mackenzie thanked them all for allowing him to put them through their rugged paces in his historical telling of how Robert the Bruce (Pine) turned the tables on the more powerful armies of the wicked King Edward I (Stephen Dillane) of England.

“I’m sorry for making you go through all those rough (weather) conditions,” Mackenzie said before his film played for the first time anywhere, “not to mention riding horses while wearing all that heavy chainmail.”

Still much later in the evening -- and, if anybody’s counting heads -- the world premiere of Shane Black’s re-imagining of The Predator apparently went off without a hitch as part of TIFF’s legendary “Midnight Madness” program.

My regrets -- for missing all the late-night fun -- go out to Black and stars Olivia Munn, Keegan-Michael Key and Thomas Jane, all of whom were on hand.

It’s just that, with yours truly already having seen four movies yesterday (including first-time director Paul Dano’s intriguing family drama, Wildlife, and Paulo Sorrento’s lengthy if ever-energetic Loro), trying to watch a fifth one at midnight likely might have initiated a genuine kind of madness.

Besides, The Predator opens everywhere Friday, so we’ll catch up with it back home, if not somewhere else at the festival before it all ends on Sept. 16.

Please return here Monday for some post-weekend adventures from TIFF, likely pertaining to seeing stars and, of course, many more movies.