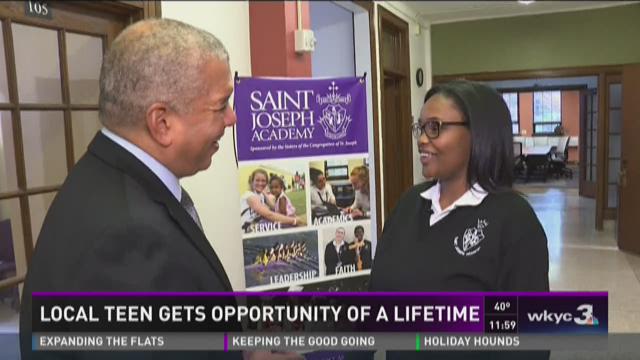 WKYC Channel 3's Russ Mitchell will have the pleasure of moderating a discussion with Hanks in the evening, but earlier in the day the actor will be at Tri-C. The two-time Oscar winner will be speaking with local students.

The person interviewing him at that event? A 17-year-old from Saint Joseph Academy.

Jonae Williams talked with Russ Mitchell on Thursday as both get ready to hang with Tom Hanks. "I'm so excited," she said. "Right now I'm a little on edge. I might scream, I might faint, you never know."

Jonae is going to be just fine. She's got her list of questions ready..and says she has seen just about every Tom Hanks movie. "My favorite is Forest Gump, and then also Philadelphia."

Williams is one busy high school senior. She's involved in several organizations at St. Joseph, has written a film, and loves to read about history. Greater Cleveland Film Commission CEO Ivan Schwarz says casting her was a no brainer.

"I was at an event at my daughter's school and this woman stood up and asked us this most articulate question," Schwarz told Russ Mitchell. "LuckiIy, I found out what school she went to."

When she graduates next spring, it's off to college. Don't be surprised if down the road, you become very familiar with the name Jonae Williams.

Williams also had some advice for Russ Mitchell about his interview with Hanks. She said just be yourself and it will all be fine.