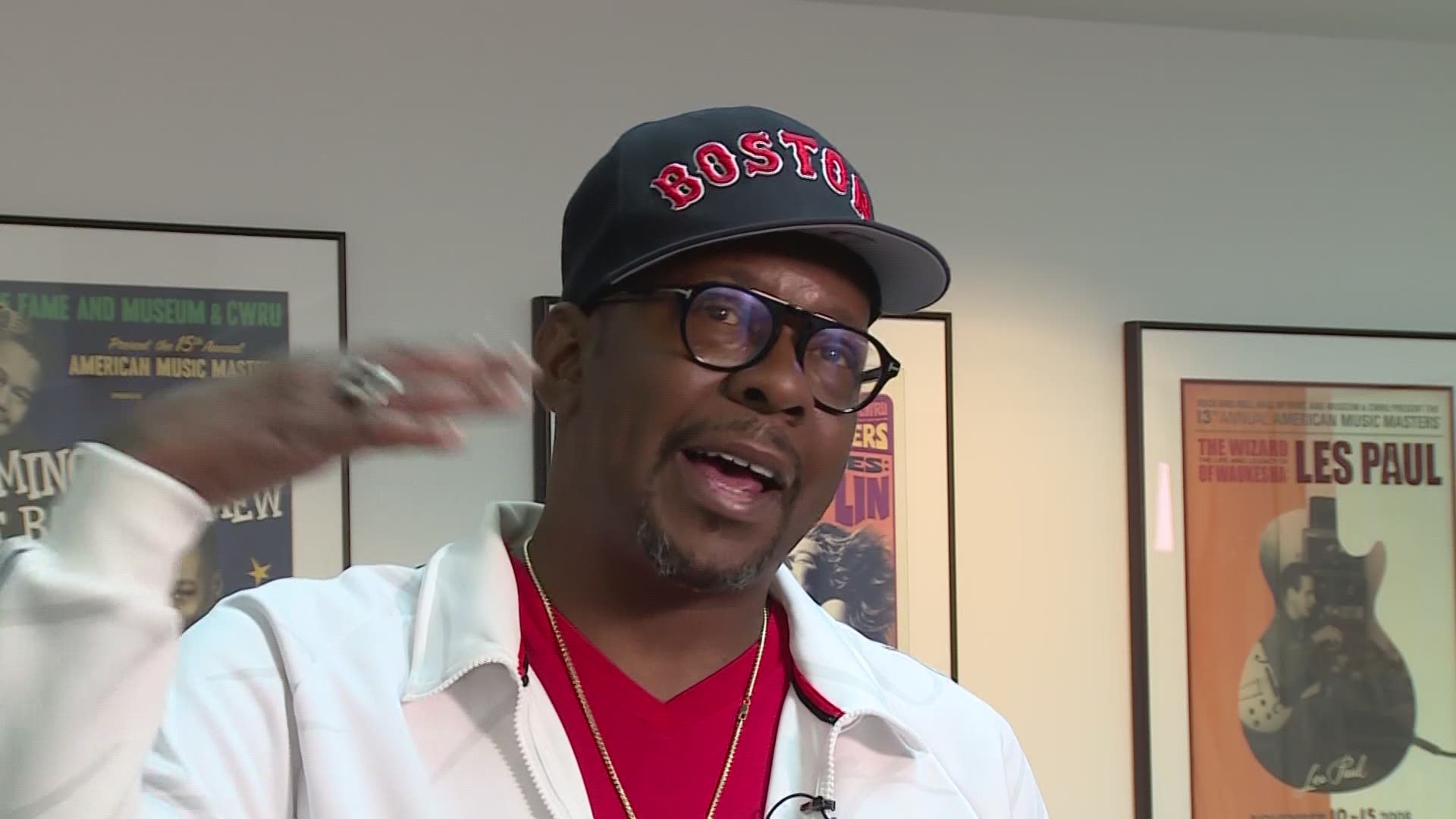 R&B star Bobby Brown came to Cleveland to do two things, perform with fellow group members in RBRM at the State Theater and make a donation to the Rock and Roll Hall of Fame.  Oh, and maybe get some good food too.

Brown, who initially rose to fame with New Edition in the early 980's and later went on to become a multi-platinum selling solo artist, visited the Rock Hall Monday where he took to the main stage for a brief speech and meet and greet with fans.  While on the stage Brown showcased a suit he had custom made for the 2016 Soul Train Awards and is donating to the the Rock Hall's "Stay Tuned" exhibit which showcases the ties between rock and roll and television.

Rock and Roll Hall of Fame Director of Curatorial Affairs Nwaka Onsuna, who received the suit on behalf of the Rock Hall, says Brown's donation will help remind museum visitors of his place and legacy in music history.

"A lot of folks forget the contributions that Bobby Brown and New Edition have made to music across the board.  So this is really phenomenal that we have a contemporary piece to celebrate the longevity of their legacy.  We're honored to have it as part of our collection."

Brown says he's touched to know his outfit will be on display alongside artifacts from some to the greats in music history.

"It means everything to me.  Music started with rhythm and blues and turned into rock and roll.  To have some memorabilia of myself, being a rhythm and blues artist, in the Rock and Roll Hall of Fame is quite an honor and I'm really appreciative of it."

Asked what he hoped visitors to the museum would think after seeing his donation, the singer says he wants them to know that as a performer, he always tried to dress to impress the fans.

"I hope they take away the crazy, cool guy (laughs) that dressed well.  I just loved to make sure that my outfits matched my talents and my ability to dance and just be wild on stage."

After the suit donation, Brown spent time with fans, welcoming them on stage and posing for photos with everyone who came.  Meeting with fans he says is a small way of thanking them for all the support they've given him over the years.

"We wouldn't be here without our fans.  We call them friends because they have stuck with us through thick and thin, though everything that we've been through in our lives.  They've been there for us.  They've prayed for us, they've cried for us and they're still there 40 years later so you have to appreciate that."

And about that food he wants?  Bobby revealed that Cleveland is one of his favorite places to perform.  Not only because the fans "Always show up and show out" but because of family ties too.

"I just love performing in Cleveland. My auntie is from Cleveland.  I have lots of family members here, so any time I'm in Cleveland I get a good hot meal. Home cooked.  And I'm just grateful to be here."

Watch our full interview with Bobby Brown below to learn why he's waiting until a future visit to tour the Rock Hall, the greats there who've inspired him and what's next for him.