It offers a rare, in-depth look at the instruments that inspired musicians and made possible the songs fans know and love 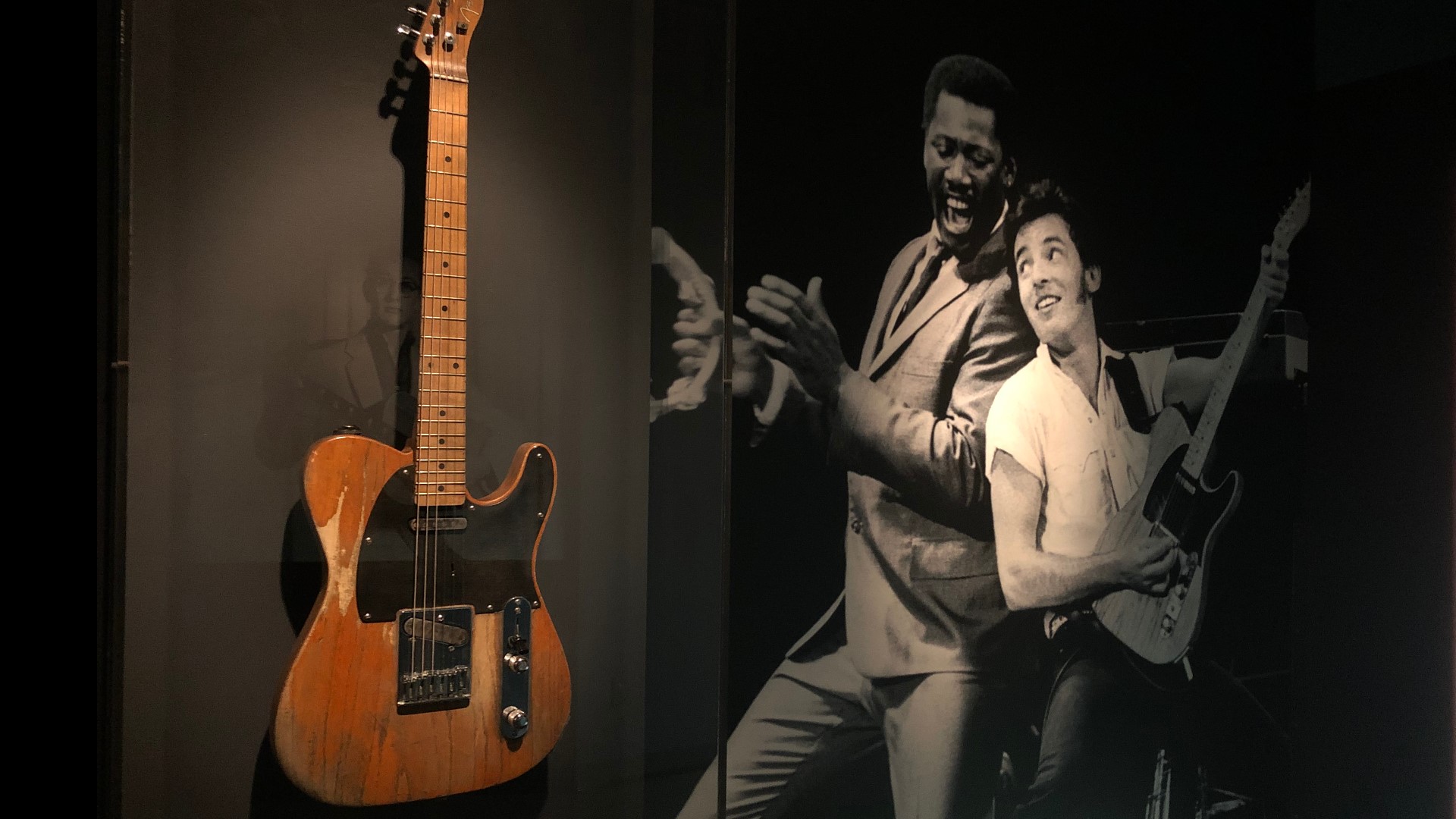 CLEVELAND — It's a showcase that's been five years in the making. One that pairs one of the world's most prominent art museums with Cleveland's own Rock and Roll Hall of Fame.

After premiering at the Metropolitan Museum of Art in New York City earlier this year, where it topped 600,000 visitors, "Play it Loud" will open to local fans and visitors to Cleveland this Friday. A joint venture with the Met, the exhibit offers a rare, in-depth look at the artists and instruments that made possible much of the music fans know and love. And it's the only time these iconic instruments will be seen together in one massive collection, and for some the select pieces, the first time they have ever been on display..

"The Metropolitan Museum of Art which shows art across 5,000 years and cultures, we don't really borrow from rock stars that often.  So the mix of cultures, everyone was cooperative and it was really fun.  We had 70 lenders which is a massive show, even at the Met.  That was a fun and interesting challenge for the Met, entering that pop culture world." 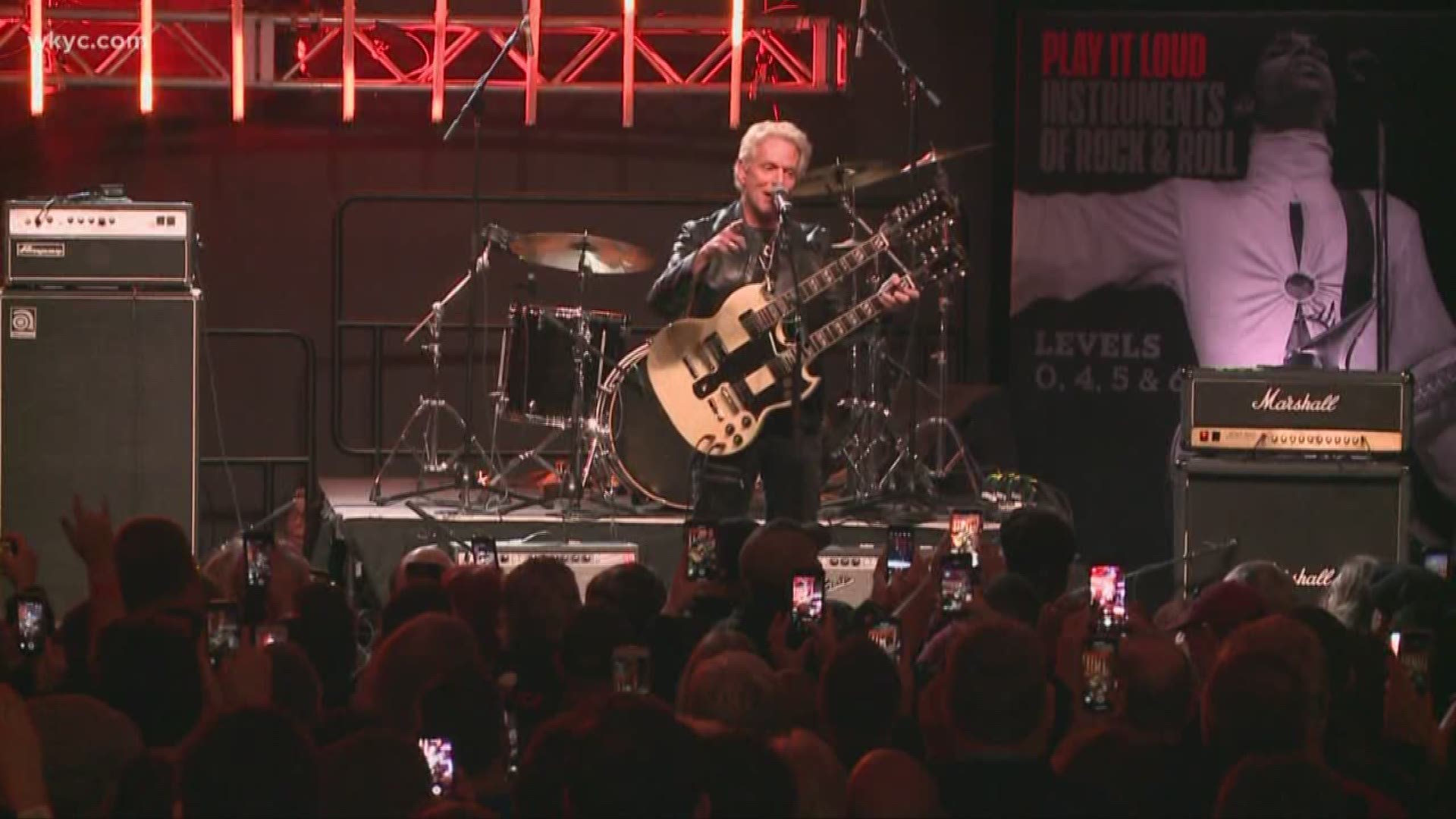 Craig Inciardi, Curator for the Rock and Roll Hall of Fame says their challenge was presenting instruments in a different way from what the museum traditionally does.

"There are so many ways we could have approached this show, but we knew we wanted to highlight the instrument at the Metropolitan Museum as a work of art which was a real departure for the Rock and Roll Hall of Fame because we are focused on telling stories. This exhibit focuses on the instrument as an object of art and also as a tool of the trade for how artists created their sound".

The exhibit itself will open to the public on Friday, November 22 and occupies space on four floors of the Rock Hall. From Bruce Springsteen’s iconic guitar to a flamboyant costume worn by Prince to videotaped interviews with artists, fans can examine personal items up close, including:

The Rock Hall's Incardi points out that many of the instruments on display were crucial to each artist's sound and success.

"As fans walk through the exhibit they will see for many artists in the show, their primary instrument that they perhaps might have used their entire career.  That they are identified with musically, and iconically for their image."

Dobney hopes visitors to the exhibit walk away with a greater appreciation, not just for the music and the musicians, but for the instruments that actually made the sounds fans recognize.

"My goal for the exhibition is that people realize how important the instrument is.  Of course it makes the music, but these are some of the most beloved objects of these players we all know and love. And it's the tool that allowed these people to express themselves in the way that we know it. So it's really thinking about these objects and how they make this art."

Prior to the exhibit's opening on Friday, the Rock Hall kicked off the exhibit's opening with a special VIP party Thursday night at the museum. Special Inductee guests of the evening included Kirk Hammett and Robert Trujillo of Metallica, Don Felder formerly of the Eagles and Nancy Wilson of Heart. All special guests have instruments included in the iconic exhibit.

Don Felder's iconic doubleneck guitar is one of those on display at "Play it Loud." He spoke to 3News about how he became involved in the new exhibit. 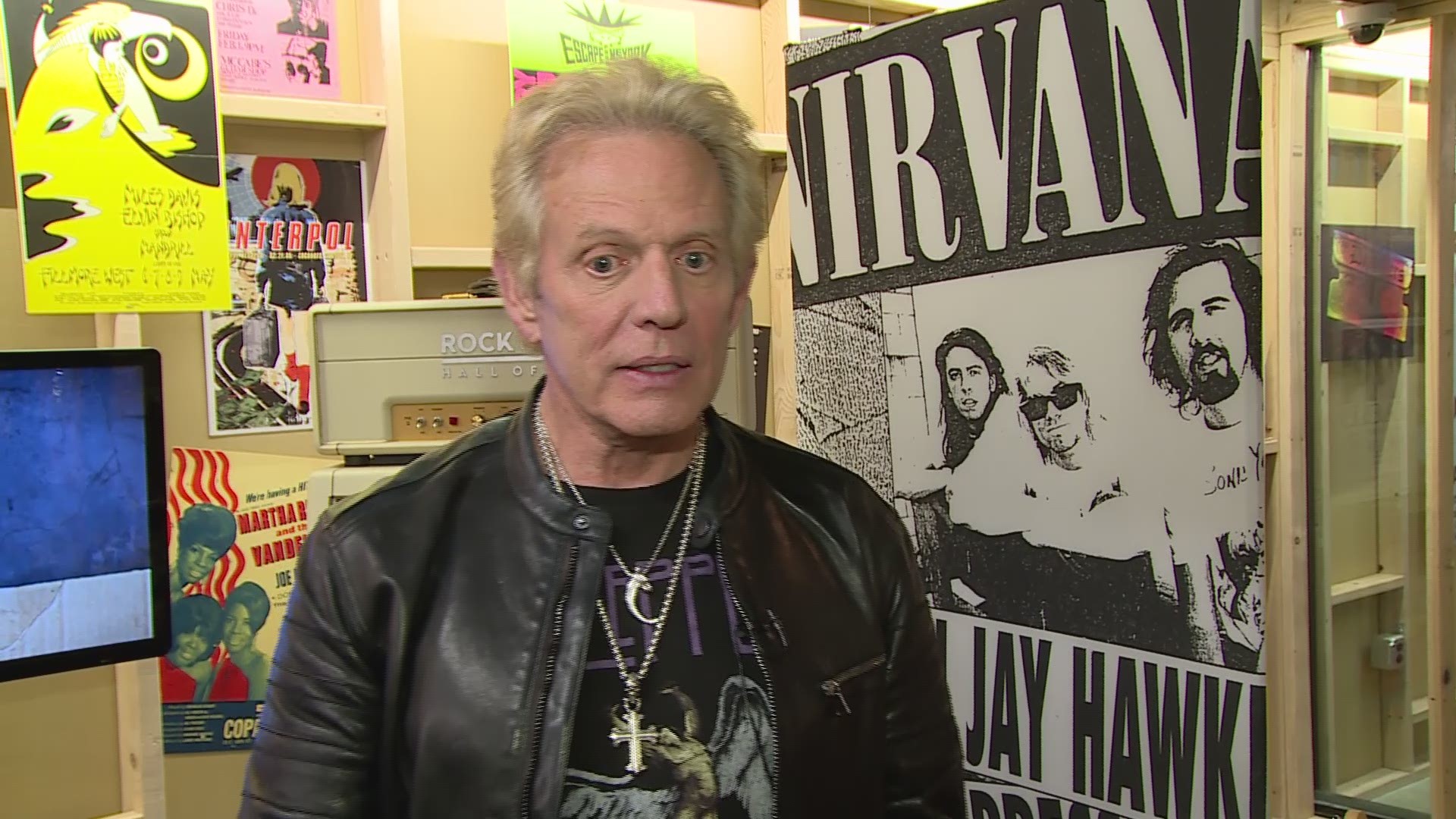 Kirk Hammett of Metallica also donated one of his guitars to the new exhibit. "Our instruments mean a lot to us," Trujillo told 3News during an interview. "There's a lot of magic there and it's brought us here." 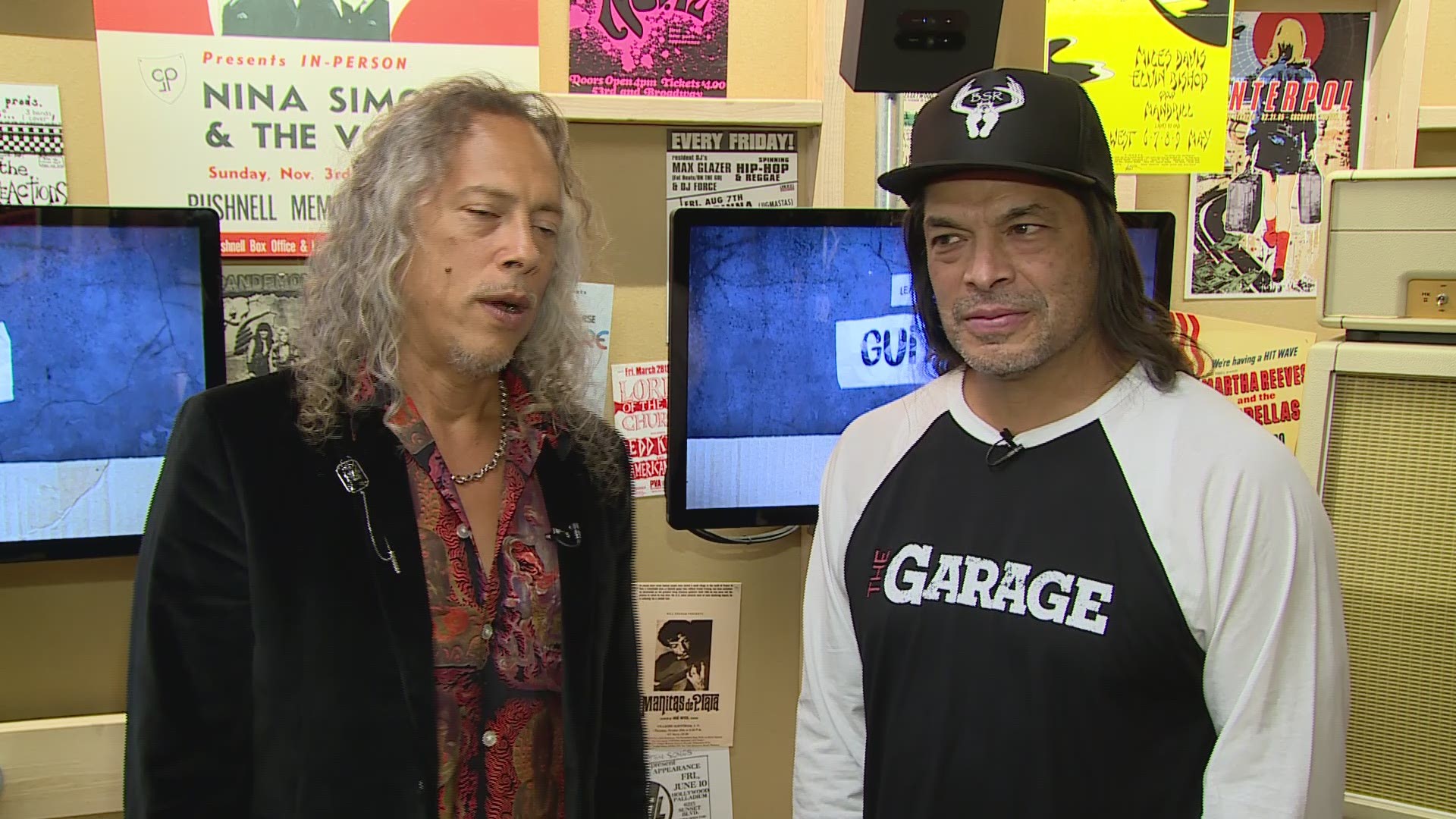 3News also caught up with Heart's Nancy Wilson, who called the exhibit "mind-bending." 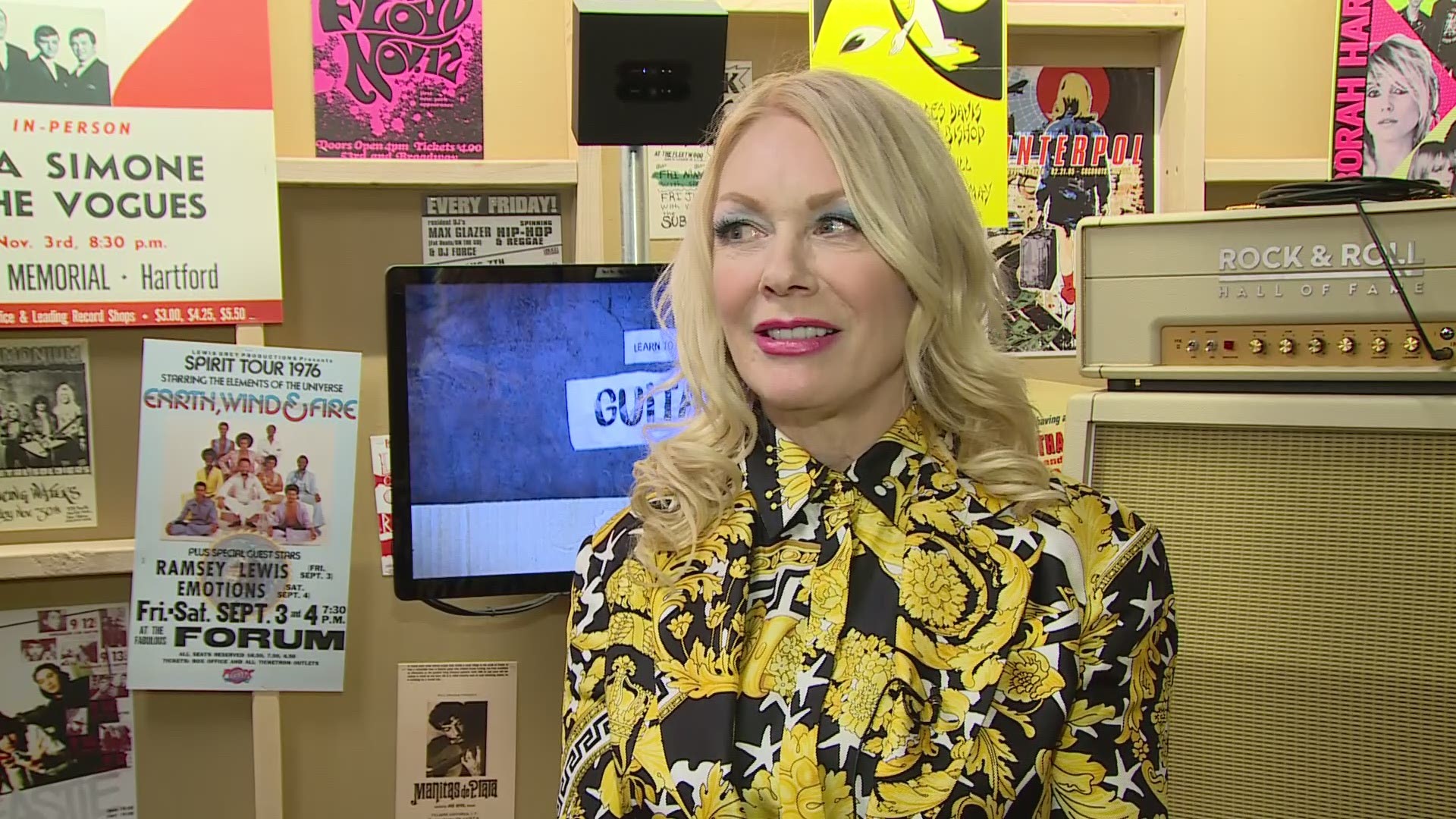 The Rock Hall is also hosting extended hours Thanksgiving weekend so that fans can bring their families and friends enjoy the the new exhibit. They will be open on Friday, November 29 and Saturday, November 30 from 10 a.m. to 9 p.m. EST.  And if you stop by that Friday or Saturday, you can enjoy holiday jams and giveaways at Noon, 1pm, 2pm (enter to win on level 0), along with chances to win prizes during Rock Hall themed game shows.

Some of the content in this article has been provided by the Rock and Roll Hall of Fame.