Now 62 years old and retired, Howard Simon was organizing his record collection at home in San Francisco. That's when he found an album he borrowed in Ohio in 1973. 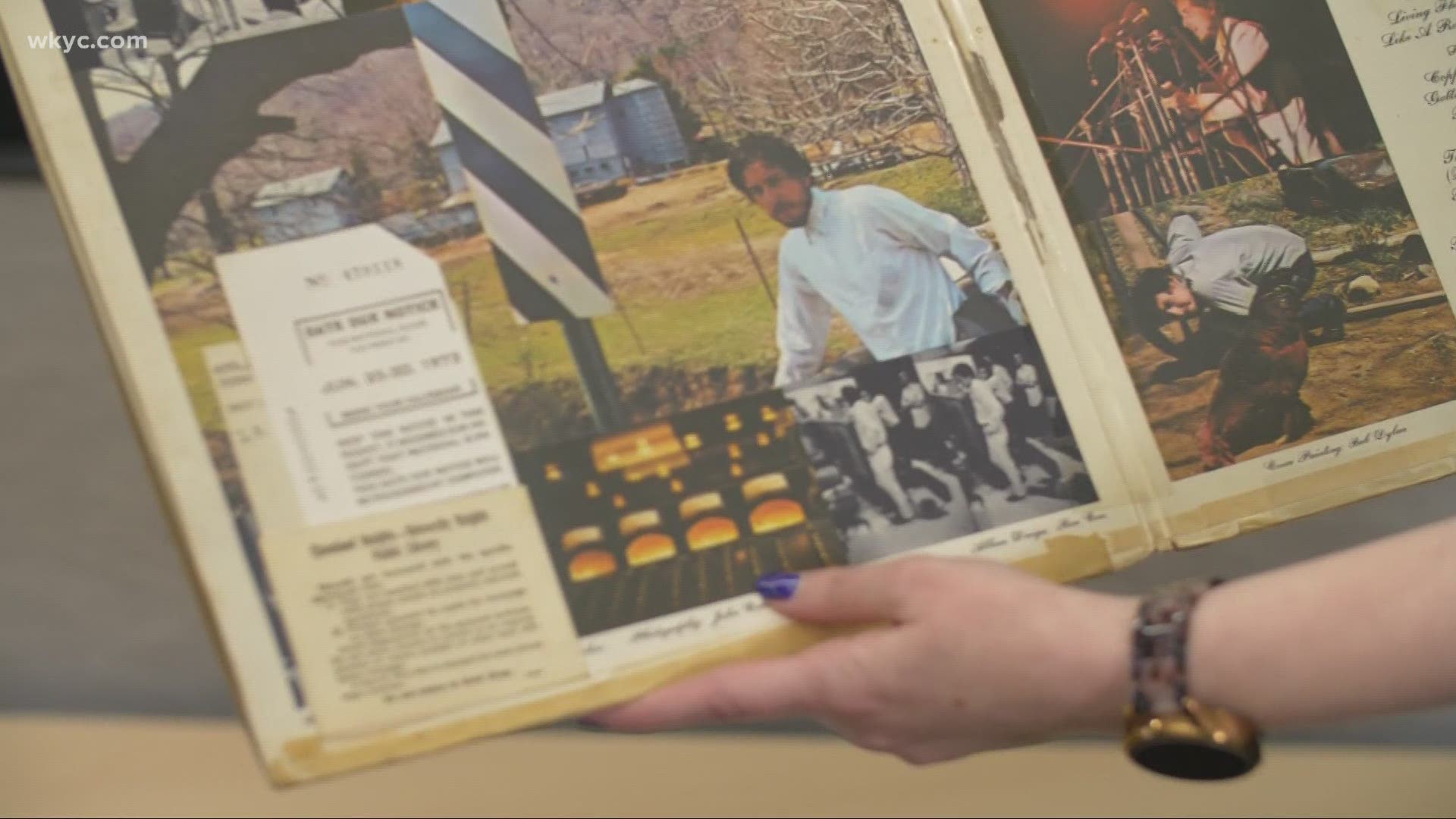 "I thought at first it was a children's picture book. because it was, you know, like a square box and slim," she recalled. "And then as I'm opening, I'm like, 'This is going to be a record.'"

In fact, it was a record - Bob Dylan's 1970 album "Self Portrait." Phillips says she first noticed the album looked a little worse for the wear, then she saw something else.

"There had been an envelope taped to the box that I thought was just being used as, like, an address label, and then one of my staff members said, 'I think that's a letter,'" she said. "I read it out loud to my staff as we're getting it, because it was so funny."

"As a recent retiree, I am taking the opportunity to turn my attention to some of the mini vignettes of life that by dent of career and family have been neglected these many years. In that context, I am returning with this letter, an overdue item. By my account, approximately 17,480 days overdue as of the writing of this letter, that I borrowed from the library in the spring of 1973 when I was 14 and in eighth grade at Wiley. So it's quite late and I am quite sorry. As you'll see the item, "Self Portrait," by Bob Dylan on vinyl, isn't in great shape. In my defense, however, it wasn't in great shape when I borrowed it. And I submit sheepishly that it hasn't suffered much additional wear and tear in the intervening almost 48 years.

"This is true primarily because 'Self Portrait' is among Dylan's least-loved albums, despite a somewhat positive reassessment on the 50th anniversary of its 1970 release. But I digress and the library's copy has spent most of these many decades in my collection quietly sandwiched between its predator, predecessor and releases, 'Nashville Skyline,' and 'New Morning' respectively, which were and remain far more listenable. It's also because as a serious record collector, I try to care for LPs as well. Though, because this particular album has moved with me from University Heights to Chicago, Santa Fe, Los Angeles, Berkeley, back to Chicago, back to Berkeley, again to Chicago, Sacramento and San Francisco, I'm pleased it's survived at all.

"Now turning to the, ahem, late fee at 10 cents a day. That would be $1,748. Quite a bit more if adjusted for inflation, but that's beyond my quantitative skills. However, the current replacement value on eBay and Discogs is about 1% of that.

"So I'd clearly do better to simply offer, to pay for a replacement, but the library has been without this item for close to a half century now. So I think paying no more than the replacement value would be a bit churlish. And to be frank, I need to do some atoning here accordingly. Please accept the enclosed check for $175 as a donation. A tithe, if you will. I rounded up to the library for this transgression of my youth. A minor transgression to be sure, particularly given the weakness of the album, but a transgression nonetheless.

"I don't get back home nearly as often as I'd like, I was last in the library as a poll watcher for the Obama reelection in 2012, but I'll drop by the next time I do. I'd love to see the new facility. Thank you for your indulgence and my regrets at this long overdue return.

Phillips says she initially didn't recognize the coding system on the album's cover, but, "When I opened it up, [that] was truly when I knew that this was ours, because it still has the date and due slip in font of it."

"I saw the sticker from the library on it and I thought, 'Oh my gosh, I still have this,' Simon said with a smile. "I opened it and I saw that it was due in June of 1973, and I thought 'Wouldn't it be a kick to send it back to them?'"

Instead, it's quickly gone around the world.

A lot has changed at the library since '73. Loans were automated in 1986 and somehow, staff lost track of Howard's corresponding slip. The library also no longer loans out vinyl records. Phillips says these days, you can borrow albums and music files through their digital resources.

Its new building – in the same spot as the original – opened in 2017. And, get this - there aren't even fines these days.

"Poor Howard had no idea that we had gone fine free several years ago, so we don't even charge overdue fees for late materials anymore," Phillips explained. "So that's a thing of the past."

It’s a good thing, too. Howard sent the record back with a $175 check – about ten percent of what he thinks he’d owe in daily 10 cent late fees.

He also included a copy of his own latest singer-songwriter album for the library's collection. It's called "Western Reserve," inspired of course by his formative years here, in the birthplace of rock and roll.

"[My] family has music in it, the city had music in it, and I absorbed it all," Simon recalled. "Music pervades Cleveland's heart and soul, and growing up there, you just feel it."

While his letters and lyrics can be whimsical, Howard says his message here is brief: "It’s never too late to do the right thing."