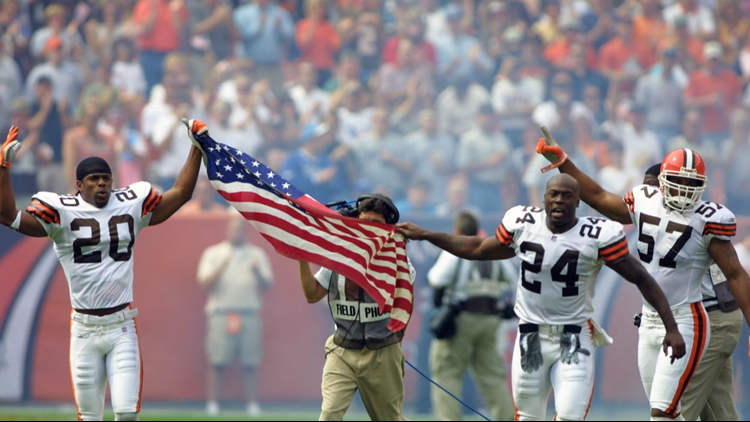 Photo by: Tom Pidgeon/Allsport
23 Sep 2001: Earl Little #20 and Corey Fuller #24 of the Cleveland Browns take the field with an american flag during pre-game ceremonies at the game against the Detroit Lions at Cleveland Browns Stadium in Cleveland, Ohio. The Browns won 24-14.

A look at how sports were impacted following September 11, 2001 | The Donovan Live Postgame Show recap

CLEVELAND — Everyone has a story about September 11, 2001. Where they were, what they were doing, and how they felt.

In my case, I was the Sports Director of WOBL-AM 1320 in Oberlin. At the time, I was also the studio host of the Bowling Green State University Radio Network and the host of the Urban Meyer Show. The 37-year-old was in the first season of his first head coaching job.

I did the Meyer show on Monday, September 10 and drove back home with my Dad that night. All seemed right with the world.

Everything changed, of course, the following morning.

While the NFL, NCAA, and Major League Baseball all suspended play in the immediate aftermath of the 9/11 attacks, high school sports would go on.

That Friday night, I was down in Wellington to call the play-by-play for the Midview Middies and Wellington Dukes high school football game. The two schools were bitter rivals in the old Lorain County Conference at the time and it was essentially a playoff game.

The moments leading up to kickoff is the only time I can ever remember not wanting to be at a game to broadcast it. My Mom was on the other side of the country at the time, not able to fly home because of the grounding of commercial aircraft. I was having a difficult time processing life in America after the most devastating day in its history.

RELATED: Cleveland makes good on its promise to #NeverForget the September 11 attacks

I just didn't have the fire in my belly to be there.

Then, the marching bands from the two schools joined together on the field and played 'The Star-Spangled Banner.' Something about that instant reminded me how proud I was to be a citizen of the United States. No matter how awful September 11th was, the terrorists could not take away our anthem, our pride, or our high school football.

I've never been prouder to have been able to broadcast a game in any sport at any time in my 20-plus years as a sportscaster. It was a beautiful night, a chance for two communities to come together in perfect harmony on and off the field.

While I was in Wellington, Jim Donovan was trying to figure out when the Cleveland Browns would resume action.

President George W. Bush enlisted the help of then-Browns owner Al Lerner to try to ensure that fans would feel safe and secure at stadiums once the games on the field resumed. Lerner, the former Marine, worked to make sure that the Browns security was top-notch when the gates of Cleveland Browns Stadium (now FirstEnergy Stadium) re-opened.

Lerner and the Browns put a lot of time and effort in preparation for that first game back. Remember that the head of team security was Lew Merletti, the former head of the U.S. Secret Service. Jimmy recalled how proud the owner was that his franchise became a model for the rest of the NFL in fan safety and security.

Off the field, Lerner and the Browns set up a special fund whereby the team would 'adopt' the children of one New York City police officer and one FDNY firefighter who died on 9/11. The Browns and Lerner provided each family with financial resources until the children reached the age of 21.

The Browns will face the Jets in the Big Apple coming up on Monday night. I don't want to say it's a must-win game...but, they really need to not lose.

Jimmy and I put a bow on last weekend's disappointing opener against the Titans during Wednesday's Donovan Live Postgame Show. Clearly, the Browns have to do a better job staying disciplined and avoiding penalties.

RELATED: Man banned from FirstEnergy Stadium tells WKYC he was not the one who poured beer on player at Cleveland Browns game

RELATED: The Cleveland Browns need to fix their issues in a New York minute -- Bud Shaw's You Said It

Someone asked Jimmy and I if the 18 penalties against the Browns were a reflection on Freddie Kitchens' ability to control and discipline his team.

If the Browns clean things up on Monday night, I'm inclined to say no. If what we saw against Tennessee is a pattern as opposed to anomaly, I'd say yes.

Watch the Donovan Live Postgame Show in the player below: