They are the four words Katie and Kevin Burns of Independence never expected to hear. 'I’m sorry. She’s gone.' 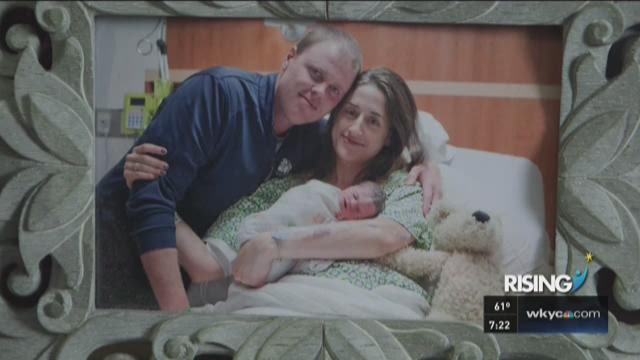 INDEPENDENCE, Ohio -- They are the four words Katie and Kevin Burns of Independence never expected to hear.

These two short sentences said by a doctor performing an ultrasound exam on Katie crushed the Burns' hopes and dreams for their daughter Emma.

The couple was expecting their first child in November 2014, but at 35 weeks, Emma had no heartbeat.

“Time stood still,” says Kevin Burns. “You can’t even describe it in words when you hear that.”

Instead of preparing for an October baby shower, the Burns were now preparing to give birth to a daughter they would never take home from the hospital.

“It was this overwhelming sense of calm and peace that was in the room,” says Katie Burns. “It was just amazing. It was really beautiful.”

“The last few moments we just held her, told her we loved her and kissed her,” says Kevin. “And the nurse took her away.”

After hearing the Burns' story, a friend of Katie’s introduced the couple to Christie Tripodi.

Along with her husband, Mark, Christie founded Cornerstone of Hope, a center in Independence providing resources for the grieving.

“Every story is so different, but we get what it feels like to lose someone we love so much,” says Tripodi.

After going through support groups at Cornerstone, the Burns saw a need in the world of grief they wanted to fill. They approached the Tripodis about starting a non-profit under the Cornerstone umbrella.

“We wanted to honor memories of all the babies who pass away too soon,” says Katie, “and we wanted to offer help and support for families.”

The Tripodis agreed and Forever My Baby You’ll Be was born.

The Burns say they provide resources to help parents prior to, through and after the delivery of their baby.

“Talking about it is not taboo,” says Katie. “Your baby lived and had a beautiful life and we want to talk about them. We want to remember those babies because it’s easy for people to forget. My mission in life is to honor all of these children who pass away far too soon.”

October is not only Emma’s birth month, it is also Pregnancy and Infant Loss Awareness Month. Forever My Baby You’ll Be, Cornerstone of Hope and Legacy of Love are hosting an event on Oct. 15, Remembrance Day, as part of the National Wave of Light. At 7 p.m. in every time zone across the country, parents light a candle to honor the memory of the children they lost.

The Burns are now the parents of Ava, a healthy little girl conceived just eight weeks after Emma's death.

"Every day I say thank you God for Emma and for Ava," says Katie. "I can't imagine life without either of them."