Dani Pajak brings old motorcycles back to life. He’s the owner of Disowned Customs on Cleveland’s west side and the host of Esquire Network’s new competition series Wrench Against The Machine. The 36-year-old’s star is growing both locally and nationally.  It was a star that may have never rose to shine if Pajak didn’t first make the decision to stop drinking. 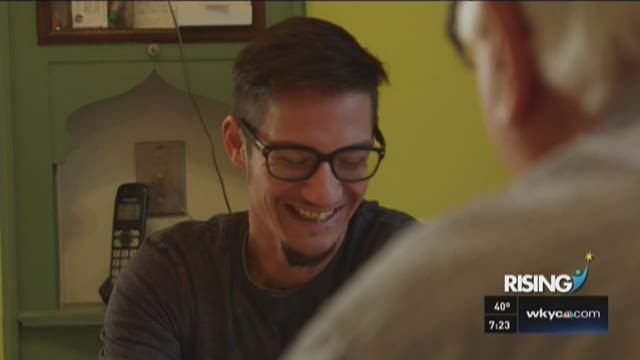 He’s the owner of Disowned Customs on Cleveland’s west side and the host of Esquire Network’s new competition series Wrench Against The Machine.

The 36-year-old’s star is growing both locally and nationally. It was a star that may have never rose to shine if Pajak didn’t first make the decision to stop drinking.

“None of this would have been possible if I would have not put down the first drink and started to change my life,” says Pajak.

EVERYBODY KNEW I HAD A PROBLEM BUT ME

The Fairview Park native picked up drinking when he enlisted in the Navy after high school. Problems arose because Pajak couldn’t turn off his cravings for alcohol as easily as his friends. He says he drank non-stop and the consequences he received wouldn’t curb his addiction.

“The DUIs weren’t stopping. The legal repercussions weren’t stopping. The fact that I had no direction in my life wasn’t going to get me to stop,” says Pajak. “There was no bettering myself when I was kind of killing everything with alcohol. I lost relationships with friends and family because everybody knew I needed help but me.”

After leaving the Navy, Pajak returned to Northeast Ohio and says the only expectation people had of him was that he would be drunk.

“It was very difficult,” says his father Tedd Pajak. “He was a totally different person.”

The elder Pajak offered to pay for services to help his son. The offer wasn’t accepted until the younger Pajak learned his girlfriend was pregnant.

“When I found out that I was going to be a dad my whole outlook on life changed,” says Pajak. “I got motivated to change my life for the better. It was not only about me anymore.”

He checked himself into rehab at The Absolute House on Cleveland’s east side and began the journey to sobriety.

“It wasn’t easy,” says Pajak. “You got the bare minimum but you were there because you wanted to change your life and that’s the kind of help I needed.”

Pajak says talking was the skill he needed to learn to move his life forward.

“That’s when I kind of realized that I didn’t know how much was a drinking problem or how much was a thinking problem,” says Pajak. “I kept everything bottled up inside me. I might be able to keep it together for maybe 90 days but at the end of that 90 days I would have so much bottled up I would just go off the handle.”

Rehab allowed Pajak to decompress and learn how to talk out his problem with people who have overcome the addiction he was battling.

“That was motivating for me,” says Pajak. “Change could happen. It’s not too late”

After learning to face his problems without alcohol, Pajak began to build a new life for himself. He enrolled in welding school, landed a job at Lincoln Electric, and picked up a hobby to fight the late night thoughts telling him to drink.

“I go on Craigslist and I find an ad for a motorcycle. At night I would go out to the garage and I’d look at this bike and I’d be like, ‘what’s wrong with you?’ I’d start figuring this thing out,” says Pajak. “I forgot those thoughts of drinking were even in my head and it would get me through the night. By the end I had a custom motorcycle and I was like seven or eight months sober.”

Pajak kept his daughter Piper by his side the entire time.

After winning awards for his custom bikes, Pajak left his job at Lincoln Electric and opened his shop Disowned Customs within the larger Skidmark Garage. He was then approached by Esquire Network to host their new motorcycle competition show Wrench Against The Machine. The show premiered November 15.

“The TV show happened I think before they realized what I actually went through to get here,” says Pajak. “When the first episode aired and you see yourself on TV, you can’t help but think had I never gotten sober none of this would have ever happened.”

“It’s been a wonderful ride,” says Pajak father. “He’s my hero because he accomplished things that I couldn’t.”

PASSING ON THE LESSONS LEARNED

In addition to running a business and hosting a television show, Dani Pajak also shares his story with others struggling with addictions as a way to pass on strength and hope. He joined with a group of sober motorcycle enthusiasts to raise money for local charities, men's health, and suicide awareness through events like the Distinguished Gentleman's Ride and the Cleveland Plane Pull benefiting Special Olympics Ohio.

He’s also bringing national attention to this region through Wrench Against The Machine; which airs Tuesday nights at 9 p.m. The season finale was filmed entirely in Cleveland and airs Tuesday, December 20th.