Parents surveyed say nearly half of teens have suffered from mental health issues during the pandemic. 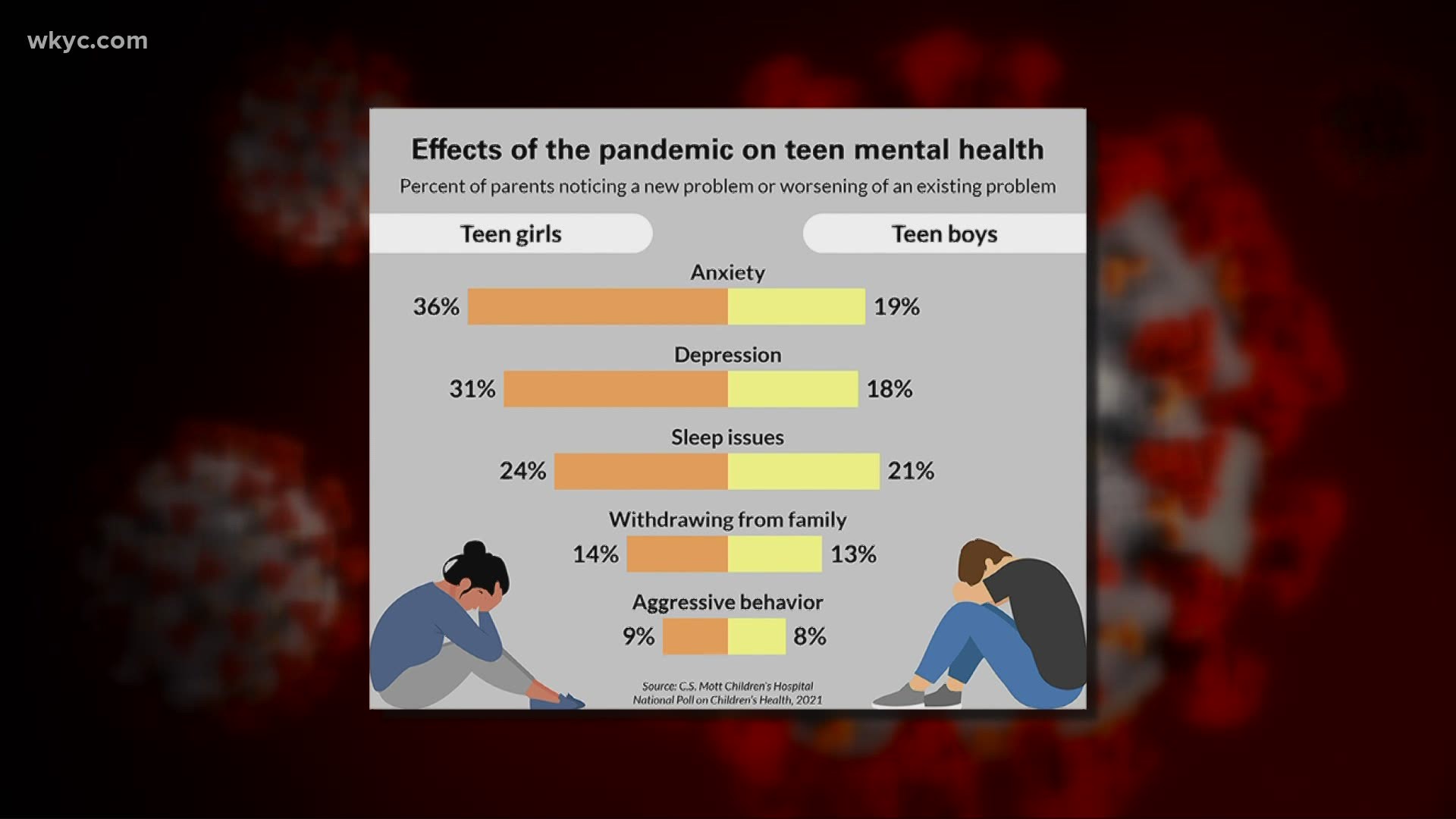 CLEVELAND — As we continue recognizing Mental Health Awareness Month, teenagers have had a tough time in the last 15 months during the COVID-19 pandemic. From isolation, being cut off from peers, remote learning, and other aspects, this has all had a drastic influence on socialization.

A recent poll by C.S. Mott Children's Hospital gathered responses from 977 parents with teens ages 13 to 18, showing several statistics, including the emotional impact pandemic restrictions have had on teenagers.

Parents surveyed say nearly half of teens have suffered from mental health issues during the pandemic, with 73% of parents saying COVID-19 has had a negative impact on their teen's ability to interact with their friends.

Even though things are getting back to normal, especially in Ohio, communication is key to recognize problems and even potential problems going forward in teens.

Nearly half of parents surveyed in the Mott study said they've noticed new or worsening mental health conditions in their teens.

So, what can parents do to try to help?

“First, just make an observation – like, 'Hey, I've noticed you've been in your room a lot lately,' or 'You seemed kind of quiet at dinner,' or 'I've tried to ask how your day is and I noticed you don't have a lot to say,' – so just an observation, about anything,” says Dr. Lee. "Check in that way often with teens so that they know parents are interested in how they're doing, what they're thinking, how they're feeling. Kids may not have a lot to say every time, but it's important to kind of keep the door open."

Many parents have already started relaxing rules, such as allowing them more time with friends outside of social media, and 81% of parents surveyed say, it has helped.

“Kids may be not as gung-ho, right? Dr. Lee says. “We were all on autopilot prior to this pandemic, and the brakes came on and it's like 'Ok, lets reassess what kind of lifestyle we want,' and kids are no different."

Dr. Lee says right now in her practice, she sees kids needing social interaction, structure, and a return to what they were doing before the pandemic, to really start feeling “normal’ again.

“There have been a lot of ways kids have been disrupted,” Dr. Lee says. “Be patient, take it slow. The goal should be really like, 'Let's just see what it feels like to be around people again.'"

According to Dr. Lee, gradual re-entry is going to be the biggest issue going forward, along with demands outside of home – that will most likely ramp up for kids, putting them a bit psychologically and emotionally out of shape.

If you are looking for resources to help with a teen’s mental health, here are a few links to check out from our three local hospital systems: