COVID-19 changed daily life for everyone, so Kassie Barnes wanted to help people smile by making them chuckle. 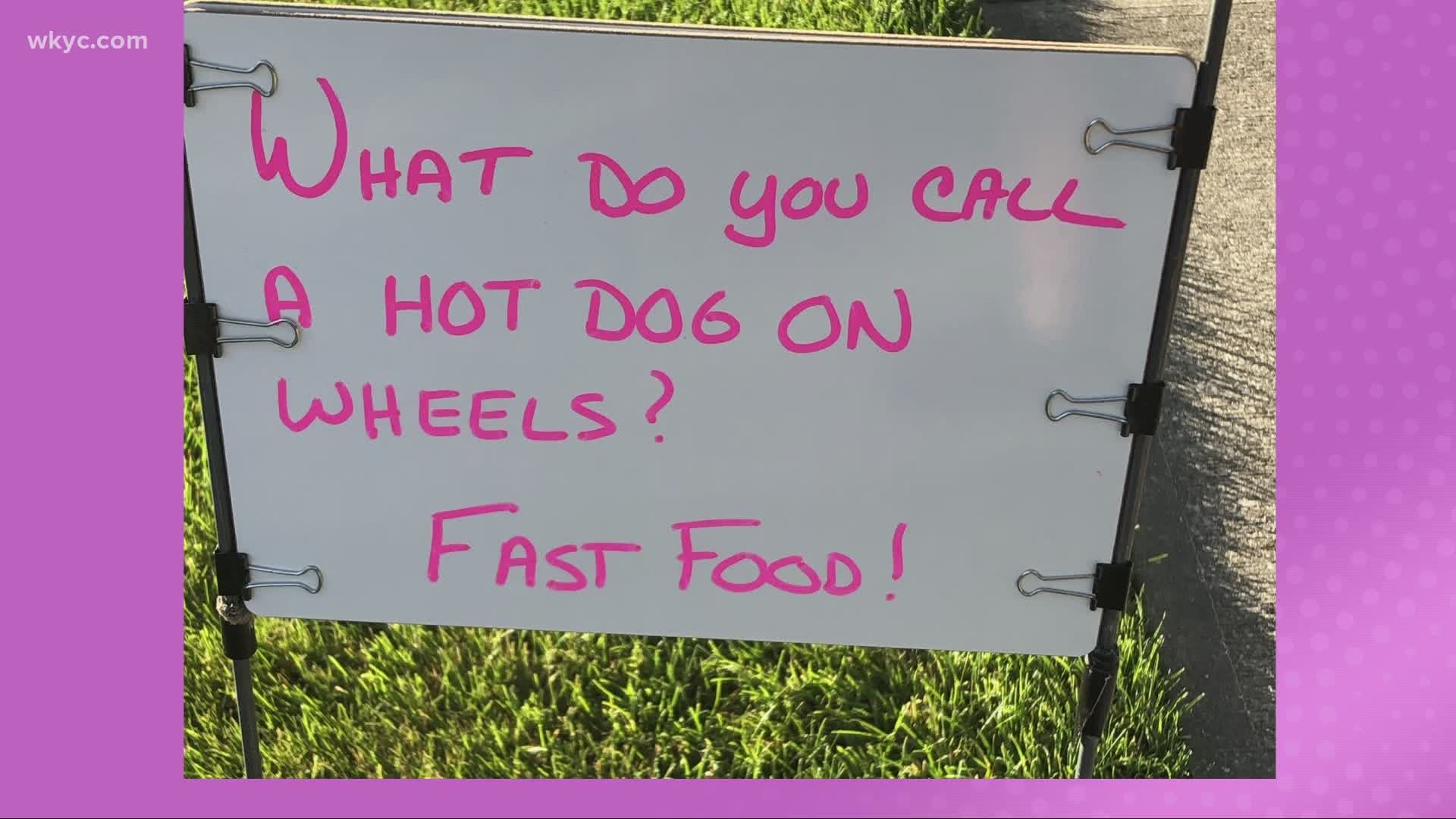 BRECKSVILLE, Ohio — “My son actually came up with one this week that everybody loved: What's a hot dog on wheels? And that’s fast food.”

3News’ Dave Chudowsky spoke with Brecksville mom Kassie Barnes, who is posting a joke every day in her yard to help lift spirits during the pandemic. She's been doing it in her neighborhood since April 4.

During the stay-at-home order, she noticed more people out walking or jogging and wondered how she could make their day a little brighter. Then, the idea came to her.

“I happened to be talking with one of my son's teachers, and she sent me a picture, a snapshot from a mailbox, where somebody had a 3x5 index card with a cute little joke. I thought hmm, that’s a good idea."

Next, she started doing what so many of us did during the quarantine: Online shopping.

“I started ordering stuff off of Amazon,” Barnes says. “My husband came out, and he's like, ‘What are you ordering all these whiteboards for? What are you doing?’”

What she was doing was delivering a smile to her neighbors. She also took the time to make sure her friends and family who didn’t live in her neighborhood also saw the jokes. Barnes started sending a picture of the daily joke via text message to dozens of her friends.

Barnes purposefully chose not to put the jokes on social media.

“I like social media. I have a love/hate relationship with it. I like it, but this felt like it needed to be more grassroots and more real.”

Barnes says she's not sure how long she'll keep the jokes coming. She already tried to stop once, but her fans weren't having it.

“Then everybody came to the house, or they responded by text and said, ‘No, you can't stop! We want to hear that ding in the morning from you because we know that everything’s OK. I don’t know how it ends. I just know that it's so much more than a little dinky sign.”

Barnes shared the "joke a day" idea with friends who live in the Washington D.C. area. They started doing it, and their story got covered by the Washington Post. The article actually references Barnes as “a friend in Ohio” who gave them the idea.

Laffy Taffy, the candy known for having jokes printed inside its labels, even sent them several pounds of candy.

But Barnes doesn’t do this for attention. She does it because it makes people smile, and that makes her feel good. She also does it for her 12-year-old son.

“Thirty years from now, when this (pandemic) was all over, my son would be able to say, ‘Hey, you know this was pretty crappy, but my mom had a great spirit and she could laugh about it.’”

RELATED: 'Be the change that Akron needs': Just A Dad From Akron movement celebrates deserving fathers while giving back

RELATED: A Father's Day gift dad will actually love: How to get a $1 lawn mow here in Northeast Ohio