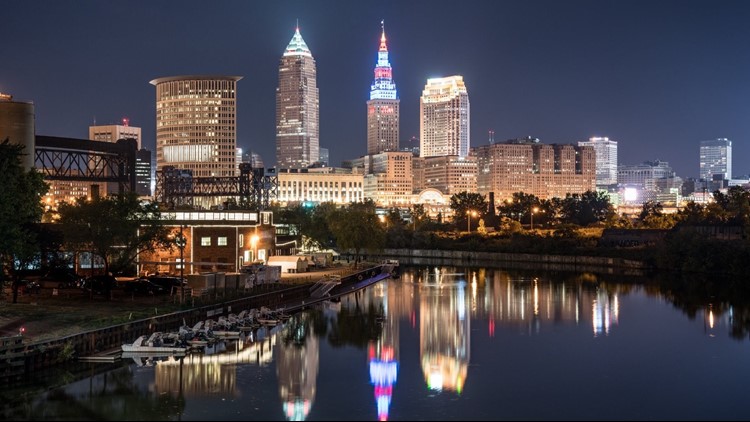 Those common features of The Bachelor are elements contestants and viewers expect to see each week in the romantic reality show.

But not this week.

“Ladies, it’s time to pack up!” host Chris Harrison told this season’s bachelorettes. “The first stop on this amazing journey that will take us literally around the world will begin in a city full of art, culture and rock and roll. Peter is going to meet you in Cleveland, Ohio.”

The look on their faces showed a clear lack of enthusiasm.

“Ohio?!?!” one of them exclaimed. “When I think of Ohio, I don’t necessarily think romance. I hope that Cleveland surprises us.”

- Savannah: “Is there like some hidden gems in Cleveland that we’re not aware of?”

- Lexi: “None of us have really gone there, so you know what Cleveland, bring it on. Surprise me..”

But once they arrived in Cleveland to meet with the Bachelor himself, Peter Weber, their attitudes toward Northeast Ohio changed in a matter of moments.

- Mykenna: “We took a little stroll this morning, and it’s beautiful here. We walked downtown, and it was just stunning.”

- Deandra: “I was not expecting Cleveland to be this nice. It gives off the vibes of a really tight-knit community, and I like that.”

- Victoria F.: “I love Cleveland. This place is just so beautiful and fun and new.”

- Peter: “Cleveland has definitely impressed me. It’s a beautiful city. A great sports town. People are super nice here. It’s kind of got a little bit of everything.”

As soon as the cast arrived, the show featured aerial images of the city, showcased the sun-soaked streets of Playhouse Square, highlighted a walk down East 4th, expressed excitement outside the Rock and Roll Hall of Fame and a offered a view of Lake Erie from within a high-level hotel room at the Hilton Cleveland Downtown.

But that was just a taste.

The adventure began when Peter selected Victoria F. to join him on a date at Cedar Point. After their private flight from Burke Lakefront Airport, the couple rushed into America's Roller Coast in Sandusky with their eyes on some of the park's biggest rides.

Among the highlights to their visit at Cedar Point were rides on Slingshot and Raptor along with a quick drink inside the Coasters diner.

Then, the real drama started as Peter welcomed Victoria to a special concert with country music star Chase Rice. The twist? Chase just so happens to be Victoria's ex.

Later that night, the duo walked inside an empty Cleveland City Hall for a private candlelight dinner where she dropped the bombshell of her relationship with Chase.

Other highlights from the Cleveland-based episode included a special "bachelor brawl" at FirstEnergy Stadium with Josh Cribbs.