Jay Wallace is someone who loves Cleveland and with his work, he's hoping to sketch his way into the city's history, one design at a time. 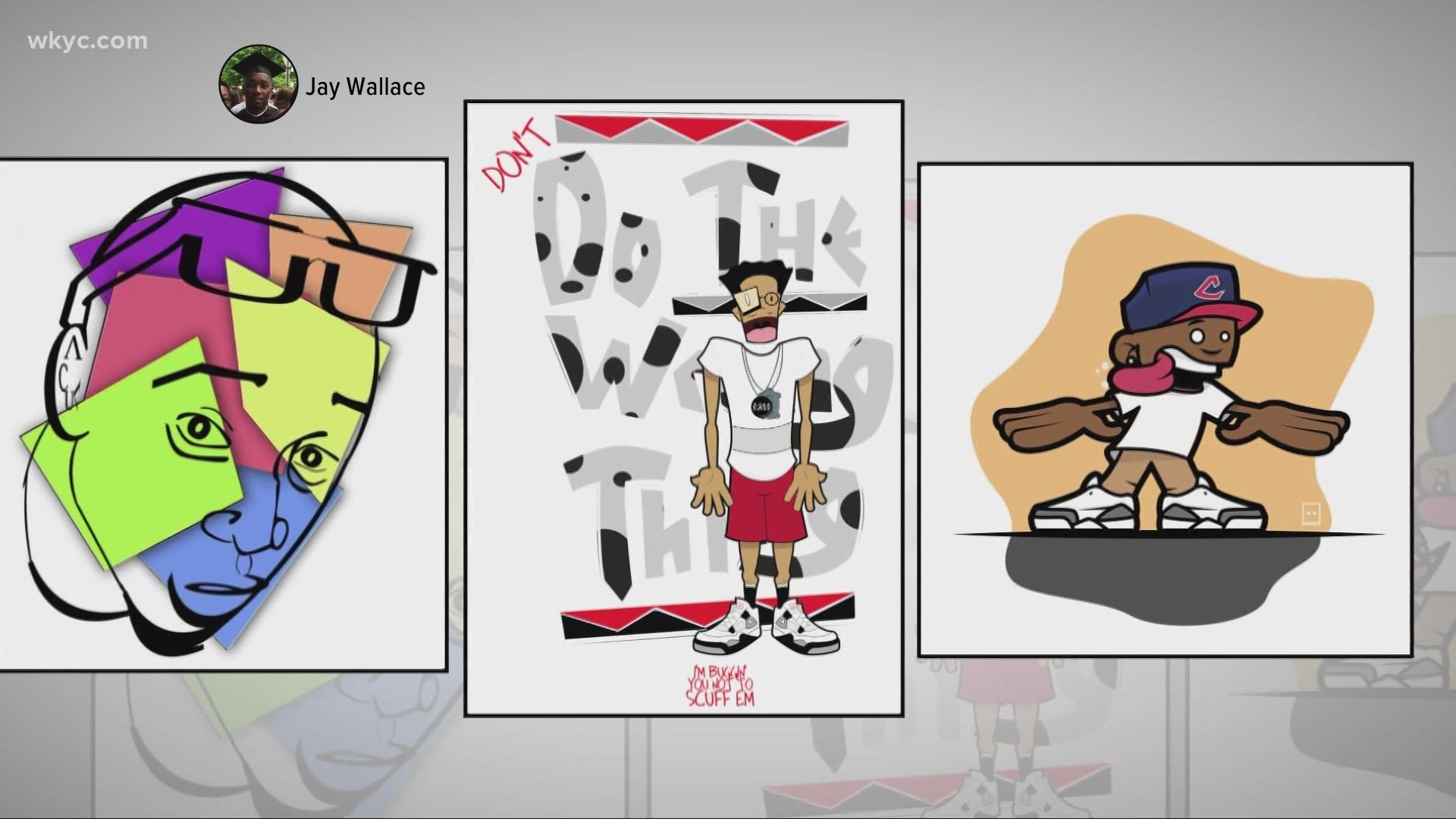 CLEVELAND — From the Cleveland Cavaliers to the Columbus Crew, the amount of thought that goes in aesthetic of a professional sports team is immense. Typically, a group of talented individuals are tasked with conceptualizing ideas from marketing materials to apparel.

For the Cavaliers, one of those people is Cleveland native, Jay Wallace. You may not recognize his name, but you're probably familiar with his work.

“Regular Cavs branded apparel like t-shirt, hats, shooting shirts, just basically anything that fans wear and players wear, there’s a good chance that I was a part of it,” explains Wallace.

Growing up, according Wallace, he always had a knack for creating, but had no idea of the potential to make a career out of his passion.

"Just being an African American in the arts, we don't always necessarily know how to nurture that...'What does your adult life look like drawing and painting?'," said Wallace.

Despite the uncertainty surrounding a creative career path, Wallace knew that he wanted to pursue the one thing he was passionate about. So, in 2008, with his mother's blessing, he left Cleveland to study illustration at the Columbus College of Art and Design.

In 2012, after earning his Fine Arts degree, Wallace returned home to Cleveland, eager to jumpstart his career. To get the ball rolling, he started posting his work on social media.

"It wasn't like oh my goodness, like I'm going to grab the attention of a notable person from this, it was really just putting it out there," recalls Wallace.

But his works did catch the eyes of important people, helping him to secure jobs with Marcus Thomas, the Cleveland Browns, the Columbus Crew and now the Cavaliers.

“I’ve been blessed to work for the teams that I grew up watching. 'How much more awesome can you get?'," he reflects.

But for Wallace the journey wasn't always easy. In 2016, he applied and interviewed for his current position and was rejected, but that didn't deter him.

"I do think that a lot of people want things instantly, and you know sometimes it doesn’t work that way."

He encourages other artist to stay the course and continue creating.

"If you feel like you’re not getting your just due, do whatever you can to create your own experience," he encouraged.

Most recently, Wallace's work can be seen in the middle of Downtown Cleveland. Alongside, Daniel Arsham, together, the two brought the "For the Love, For the Land" banner on the Sherwin Williams building to life.

"It just looked way better than how it did on my computer," Wallace recalled after seeing the banner in person for the first time.

Jay Wallace is someone who loves Cleveland and with his work, he's hoping to sketch his way into the city's history---one design, at a time.

“Coming out of a pandemic, I’m sure every city is going to be in some type of resurgence and I just want to be a part of that," says Wallace.

And while Jay is a self-proclaimed ambassador of Cleveland he does aspire to use his talents beyond Ohio.

"I’ve been able to become successful at home, and that’s awesome. So now it’s can we take these talents national or worldwide even.

If you'd like to suggest a feature to Kierra, you can connect with her via email at kcotton@wkyc.com or via Twitter.