After fighting a brain tumor and living through a pandemic, Emma Maier says "Don't ever take anything for granted." 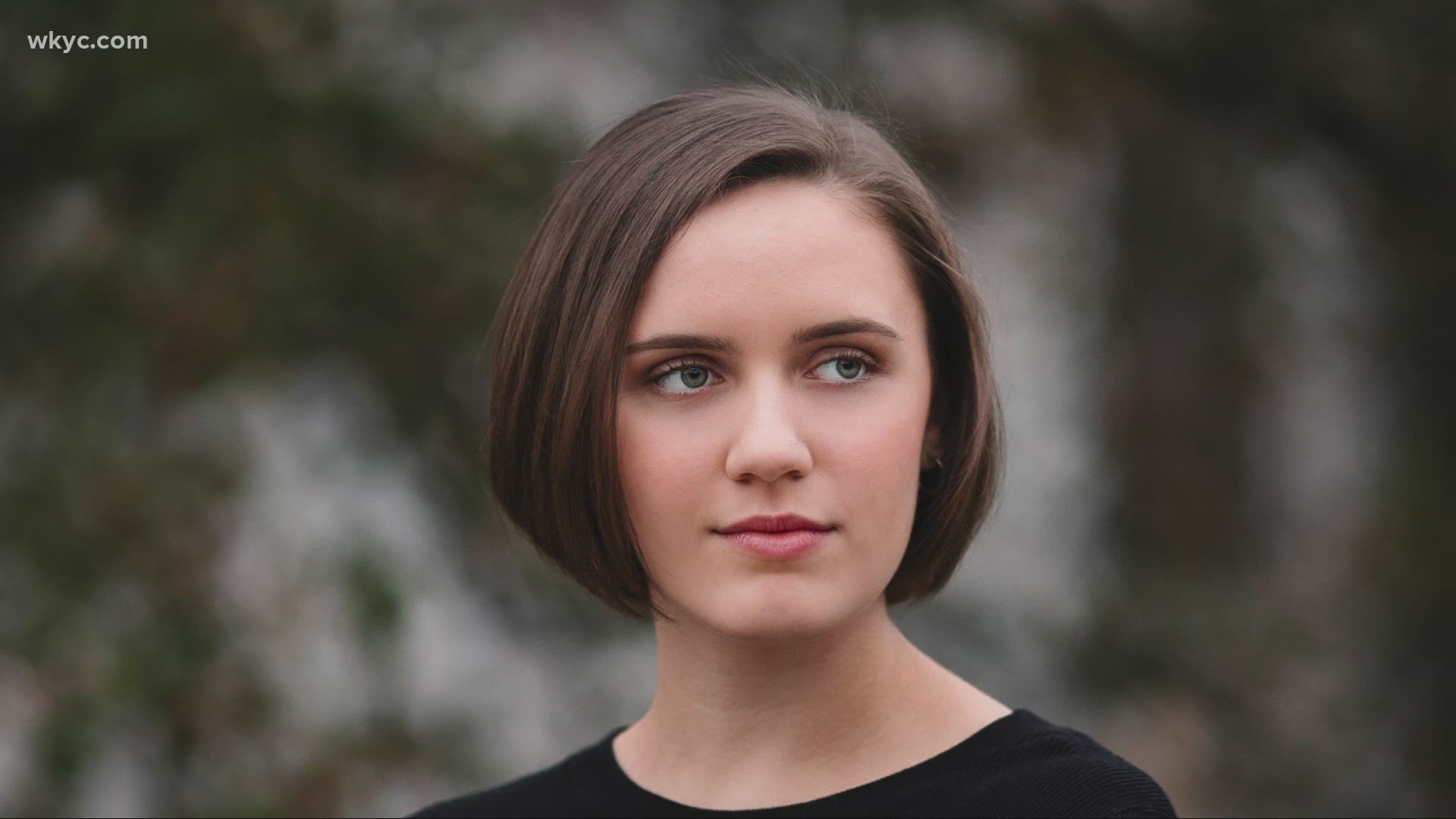 MASSILLON, Ohio — A final rehearsal before cameras roll, the Jackson School for the Arts is doing what many thought impossible. They are putting on a fall production.

“We feel so strongly that we have to continue to give them opportunities,” said Susan Gardner, J.S.A.’s Performing Arts Director.

The choice is fitting, given all that these students have gone through in the past 7 months. It’s a strange world they live in now.

“That’s kind of how the Wizard of Oz came to be. We were talking about there’s no place like home,” said Theater Director Hannah Rissler.

The play is adapted to reflect what’s going on in our world today, the uncertainty and desire to go home, to return to what’s familiar.

This version of Wizard of Oz includes the Scarecrow, Tin Man and Lion costumes changed to represent the 3 different versions of school during a pandemic: at home, in school and a hybrid.

Credit: The Maier Family
Emma, the daughter of Stephanie and Erich Maier, has danced since she was very little. She also takes voice lessons and loves the stage.

The J.S.A. stage is home to hundreds of dedicated students, but perhaps none more so than senior Emma Maier.

She was tapped to play Dorothy, a role the last 2 years of her life prepared her for in ways she never could have imagined.

“I’m going to be a mess every night, watching this girl sing somewhere over the rainbow,” Rissler said.

INFO ON HOW TO STREAM JSA'S WIZARD OF OZ HERE.

Singing, dancing and performing are Emma’s passions. The stage has been a part of her life, she was little.

But by Emma’s freshman year at Jackson High School, something wasn’t right.

Credit: The Maier Family
By the spring of Emma's freshman year, she was experiencing worrisome symptoms: dizziness, numbness and headaches. Her ailments were originally thought to be a pinched nerve and migraines which run in her family. But when her symptoms worsened that summer, Emma saw a pediatric neurologist.

“I would go to the doctor and they would give pretty reasonable explanations to not be worried,” Emma said

Those explanations for headaches, numbness, and dizziness were all thought to be the result of a pinched nerve in her neck and a family history of migraines. But by summer of 2018 they worsened, and Emma was referred to a pediatric neurologist.

“The words he said to us, there’s a mass in her brain,” Stephanie Maier recalled.

That mass was a pineal parenchymal tumor of intermediate differentiation or PPTID.  The tumor is so rare it was only named a few years ago.

For Emma there was no time to process the news. She would need emergency surgery to relieve fluid build-up in her head.

“You know, we go to the doctor and less than 24 hours later she’s out of brain surgery,” Stephanie said of how quickly things happen.

That first surgery happened on a Friday. Emma was in school, by Monday afternoon.

Filled with hope, when Emma underwent surgery at the Cleveland Clinic a month later to remove the tumor.

Credit: The Maier Family
Emma underwent surgery in September of 2018 at the Cleveland Clinic. The majority of PPTID tumors are benign. Emma's was not.

“We were very prepared that this was going to be a benign tumor,” Stephanie said.

The news was not what they hoped. Emma’s tumor was cancerous.

“They had clearly done their research and knew what they were dealing with,” said Erich Maier, Emma’s dad.

Surgeons got as much as they possibly could. Emma’s head bears the scars and her scull put back together with titanium screws.  She would need radiation, 33 appointments to attack the remaining bit of tumor on her brain stem.

Credit: The Maier Family
Emma battled back against her tumor. She maintained a heavy, accelerated workload at school. She didn't want to miss the spring musical of Bye Bye Birdie, just months after finishing radiation. The week of performances, Emma's doctor cleared her to dance again. She was elated.

The feisty teen was ready to negotiate. Emma’s surgeon said she would four weeks to recover at home before returning to school. “And she said, ‘no, how about 2?’ And he said, ‘no!’ So they settled on 3,” said Stephanie.

The treatment was exhausting. Emma would take the elevator and would avoid carrying anything heavy. She asked that her radiation treatments take place in the afternoon, so she wouldn’t miss school.

And the Stark County teen wasn’t about to miss the spring musical either.

‘I was actually in the Jackson High School musical Bye Bye Birdie. And I wasn’t able to dance until the week of the show. But I was still able to perform in it,” Emma said.

As she battled extreme fatigue Emma still carried her load of A.P. and honors classes, dancing when she felt well enough.

Credit: The Maier Family
So many people have been by Emma's side during her cancer diagnosis. Among them, her boyfriend Zack Charlick posing with Emma after her surgery at the Cleveland Clinic and at the 2019 Big Shots and Little Stars event to raise awareness and funds for pediatric cancer research.

“She never once said, ‘Why did this happen to me?’ She was very quiet and very optimistic,’ said Susan Gardner.

In fact, Emma’s parents said they often got their strength from their daughter.

“You always assume that it’s the parents who are providing the strength to their child. You feel hopeless at times, but frankly she was the one that gave us strength and showed us resilience. And she still does,” Erich shared.

When thoughts turn to that very difficult year, Stephanie gets choked up, thinking about the support and love Emma received from their community.

“Jackson School for the Arts and that group of people came together and made sure she had as normal of a school year as she possibly could have,” Stephanie said.

Today, Emma is cancer free. Her MRI’s which she will likely have through much of her life, are clear.  Now, looking back on cancer, Emma has a new perspective.

Credit: The Maier Family
Emma Maier was diagnosed with a rare brain tumor at the start of her sophomore year. Today, she is cancer-free and starring in Jackson School for the Arts production of Wizard of Oz.

“To just appreciate every moment in life and not take anything for granted,” Emma said.

Now a senior, Emma is ready to bring what she’s gone through in the past two years to the role of Dorothy. She tells us singing that iconic song, Somewhere Over The Rainbow, carries new meaning.

“Somewhere Over Rainbow is just a happy place, where I don’t have cancer and can be a normal teenager. I’m over the rainbow,” Emma said.

For Emma it’s a role that she is embracing, after beating cancer, and still being able to perform in the middle of a pandemic.

And as Emma sings in Somewhere Over The Rainbow, “dreams that you dare to dream, really do come true.”

Due to COVID-19 restrictions, it is not possible to put on a live performance before a packed auditorium. Instead, the Jackson School for the arts is selling a link so you may stream the Wizard of Oz.

INFORMATION ON HOW TO WATCH EMMA PERFORM AND STREAM THE WIZARD OF OZ CAN BE FOUND HERE.

Web-exclusive video: Check out the moment that Emma found out that she won the role of Dorothy in the player below:

RELATED: Poland dad to run Akron Marathon around hospital where son is getting cancer treatment