David Petrovic, 28, didn't even speak until he was three years old. But that all changed. Now, he speaks around the country. 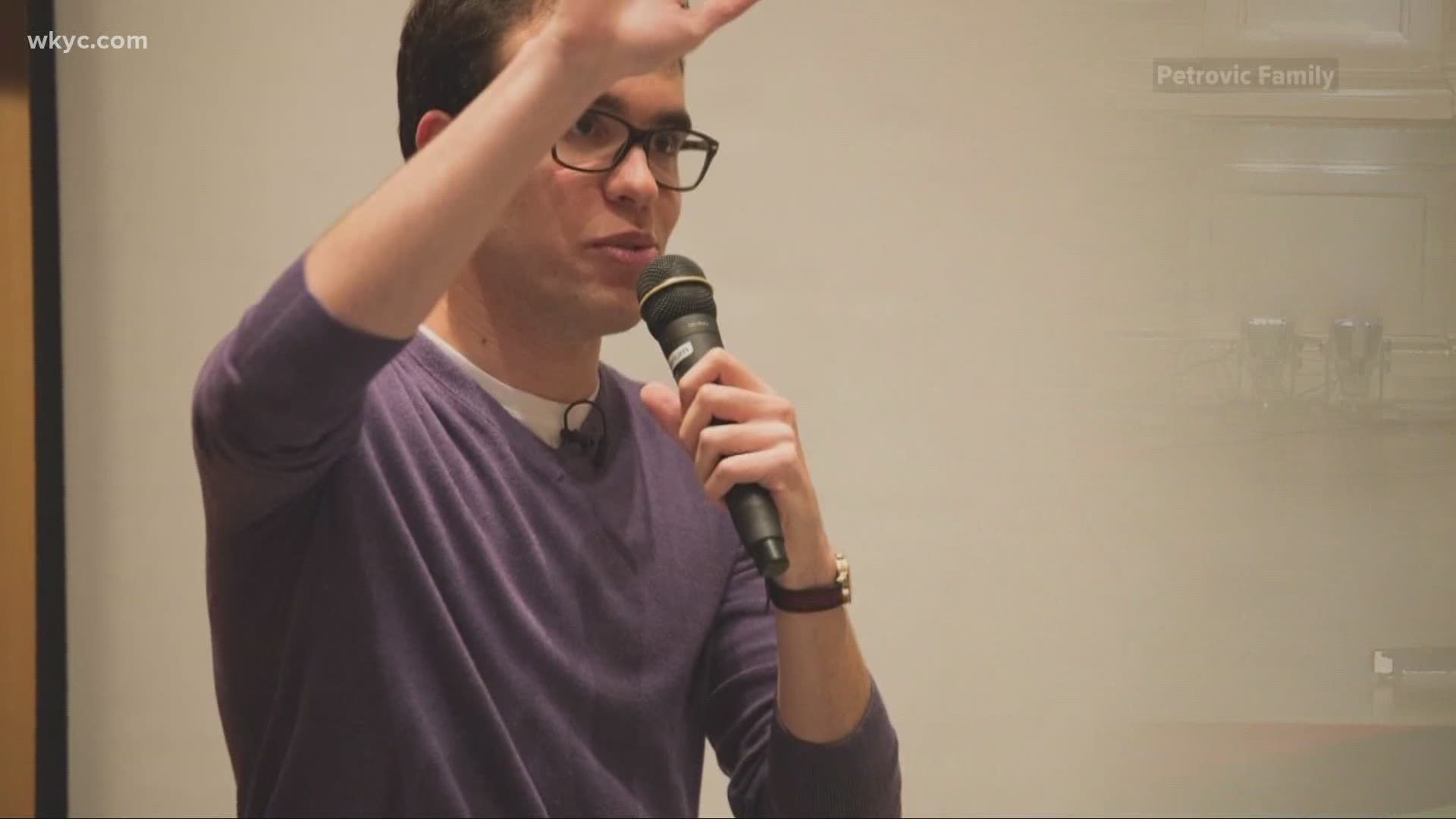 MENTOR, Ohio — David Petrovic, 28, had a challenging start in his first three years. He didn't speak ... at all.

“He had a very sophisticated thing that he kind of started doing -- like a mime, almost. And he would act out in pantomime and we could figure out what he was talking about," Sandy Petrovic said of her son.

“I think when people hear the word autism, a stereotypic image comes to their mind and it'll be different for everybody. But what we wanted to communicate was that everyone with autism is totally different," Sandy continued.

David was diagnosed with Tourette's and Asperger's Syndrome, which Sandy described as a "high-functioning form or autism." But in 2013, the American Psychiatric Association eliminated it. Now, it's under the umbrella of autism.

“It's the social skills and communication that are very difficult and also they're kind of restricted repetition, certain rituals. So those are kind of the two categories. And along with that, comes a lot of sensory differences," Sandy said.

There was heavy therapy and special schools until the 8th grade. But what really clicked with David, was theater.

“Getting involved in theater at age seven was first as a way to just make friends, but now that's really helped strengthen my empathy and my compassion," David said.

Soon, that little boy who, at first, couldn't say a word, became a national speaker -- even landing the coveted honor of a TED talk.

“It's an honor and a privilege to now have my message out on an international platform," David said.

Shattering stereotypes, David is also a junior high social studies teacher. He teaches from the heart, often drawing from his own experiences with being bullied.

“I'm also passionate about the children. You know, I also want to be sure that their mental and emotional needs are met and that they know that someone is in their corner," David said.

There are still struggles. Only now, David has the tools to cope.

“Just take a work day at school, you know, where there's been a shift in schedule. Then, I'll start to feel a little overwhelmed," David told us. “Having ear plugs in my pocket, flesh tone ear plugs, that I can just subtly put in without drawing attention, plug into my ears, and it doesn't make my surroundings mute. If anything, it, by putting the ear plugs in, it blocks out the unnecessary white noise.”

You can also add author to the list. David and his mother, Sandy, just released the second edition of their book: Expect a Miracle: Understanding and Living with Autism.

“We talk about the many miracles that took place, the many therapies, the miraculous people that came into our life that we never would have met had he not had autism," Sandy said.

It's not just about the challenges -- it's the gifts right in front of you.

“He was single-minded, more aggressive as a child, didn't understand other people's points of perspective. And now, he's the most sensitive kind, man," Sandy said. “So my pride is not just in what he's accomplished. My pride is in that he's got so many dreams and he works so hard. He has such grit. He is motivated and he never stops. And even when he falls, he gets right back up.”

For David, he wants the world to see people with autism differently.

“As a society, we need to look past the physical by having a conversation with someone or listening ... listening to people, get to know the person for who they truly are on the inside," David said.

RELATED: Autism Awareness Month: How families are coping through pandemic

RELATED: Watch: Boy sings to baby brother with Down Syndrome