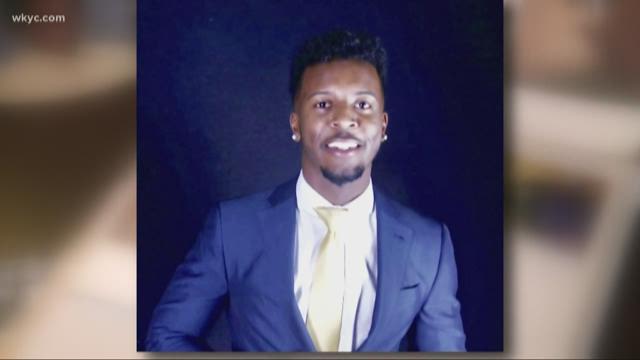 It's easy to see why people loved Devin Moore.

"He was a bright light," his mom Christa Poole told WKYC's Sara Shookman. "He was just a big huge, personality. He not only knew a lot of people, but he really got to know them."

The Kent State senior was brother to little sister Olivia, his other siblings, and to his fraternity, Omega Psi Phi. His parents. Christa Poole and Darryl Moore are learning just how many people will never forget him.

"When I hear the stories and see the outpouring of support, it makes me feel good that other people also were touched and got a glimpse of who he was," Christa says.

Whether it was speaking at a fraternity conference, or in his everyday life on campus, Devin inspired. He'd hoped to be a sportscaster. Writing, speaking and basketball all came naturally for Devin.

"It was a way to allow him to remain close to the sport he loved and also do something that he knew he would enjoy, he was good at, and he could make a difference," says Christa.

Devin was on the basketball court when he collapsed and died last Wednesday.

"I keep reminding myself that Devin died doing what he loved," says Christa through her tears. "He was playing basketball, it happened suddenly, so there was no time for him to be afraid. It's just how does this happen to someone who's healthy, who's young, just collapse and die suddenly?"

A preliminary autopsy points to an unknown heart condition called aortic stenosis. His family points to his life as an example of a life well led. A legacy of the pursuit of dreams.

"The greatest gift is that I got to be his mom," she adds.

Devin's parents are working with Kent State to create a scholarship in his name to help other communications and journalism students carry on their own dreams in his honor.

"That would be an opportunity for him to live on through others, through their dreams, their hopes, their accomplishments, that’s really what I want his legacy to be," smiles Christa.

Details on the scholarship are still being worked out, but we'll be sure to bring them to you.