In his own words, Ofc. Kevin Jones responds to the photo and the events of that day. 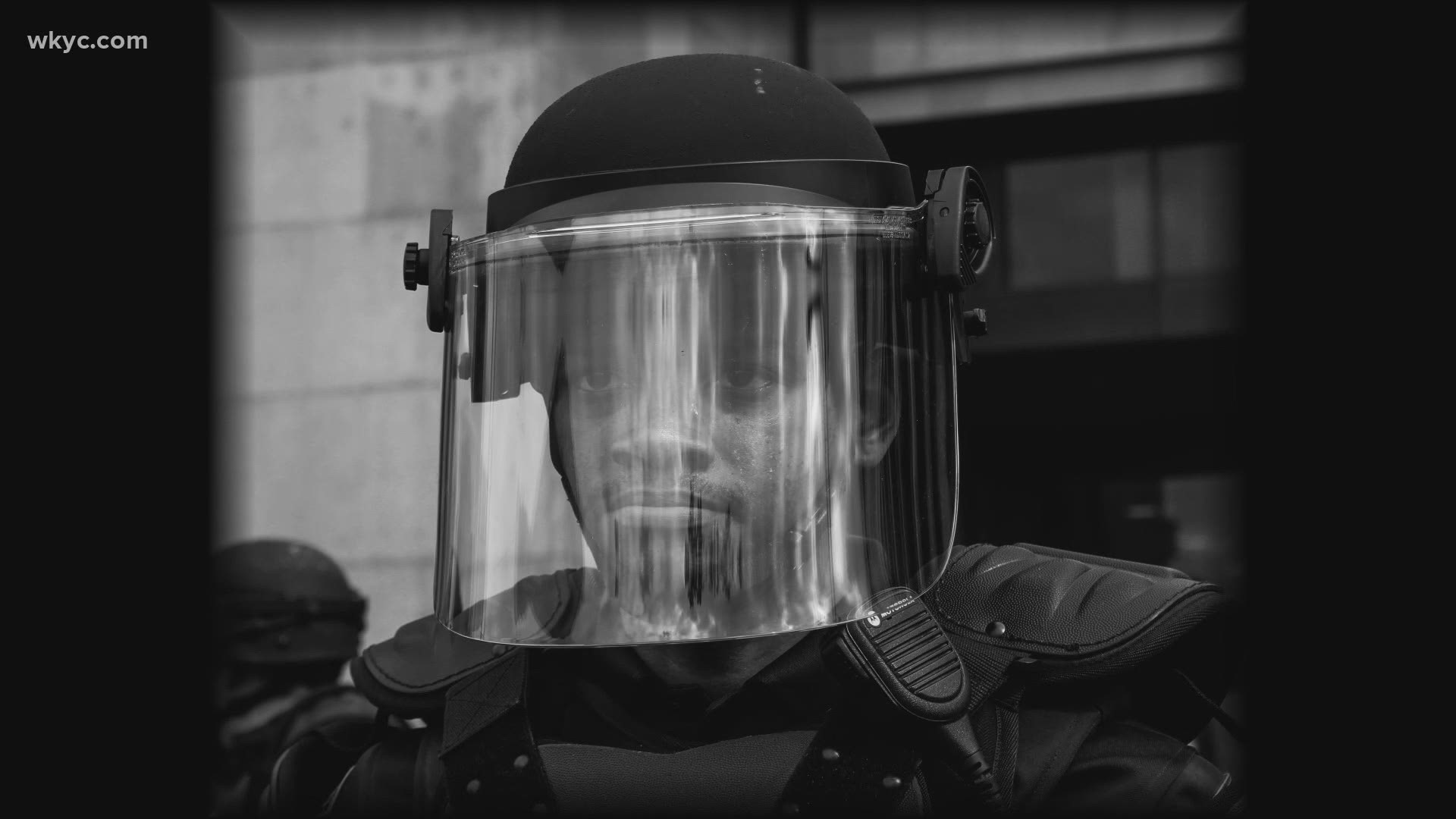 CLEVELAND, Ohio — In the days after the protests and unrest downtown, we are getting a better look at some of the more powerful and emotional moments.

Through the lens of a student photographer you can see both sides of a very important conversation.

“I tried as much as possible to kind of focus on what the protesters were seeing but also capture their anger and their hurt as much as I could,” explains Sylvia Lorson.  “I wanted people that couldn’t make it out to the protest to see what it was like there so that they know what’s going on and don’t just turn a blind eye.”

Lorson is a journalism student at Kent State University with a minor in digital media production.  She says she’s supported the Black Lives Matter movement since it’s started.

One of her photos showed a powerful image of a black police officer, face-to-face with protesters, shedding a tear.

“I do remember the moment that  the one guy next to me said [to the officer,] ‘you do agree with us don’t you,” he [the officer] wasn’t saying anything while we were talking to him, he was just staring straight ahead and as soon as that person said that, said ‘you agree with us,’ he just closed his eyes.”

Lorson says she didn’t realize he was crying until she went home to edit the photo.

“You could just see he was hurting,” she says.

Lorson also says the situation is difficult because police officers are people too, but she believes the system is corrupt.  “When you’re there it’s really difficult to tell which officers are good at heart and which ones just would shoot someone dead without a second thought, it’s hard to tell and that’s the problem,”she explains.

1 / 20
Sylvia Lorson | @sylviagracee
Hundreds of people to the streets of Cleveland Saturday, May 30 in protest of the death of George Floyd, a Minnesota man killed in police custody.

Lorson wanted to share a statement that reflected her full thoughts on that day:

"I think it is important for me to say that the most important people that we should be giving the attention to are the protestors: the oppressed. This is about helping them and bringing George Floyd, Breonna Taylor, Trayvon Martin, Tamir Rice (and every other black person murdered by police) justice. While this story of one good police officer is nice to hear, it does not erase the fact that while you are at one of these protests, it is impossible to know which officers are good and which ones will shoot you with rubber bullets and tear gas if given the chance. And I saw much more of the latter on Saturday. It is the black community that needs their voices heard."

The officer reached out to her on social media.

3News also reached out to the Black Shield Police Association and learned the officer in the photo is a member of the organization and a patrolman for the Cleveland Police Department.

Black Shield sent these questions and answers to 3News:

What is the context of this photo?

What words do you remember were being said? What were your feelings hearing their words?

As I stood behind a shield that read “police”, I can remember hearing protesters yelling very loud, chanting very passionately: “No justice, No peace, No racist police.” When hearing those chants, I became very emotional as I knew that the peaceful protesters were standing up for their constitutionally protected civil rights.

Outside of my uniform, I am an openly gay Black male; George Floyd could have very well been “Kevin Jones.” I could feel and understand the pain felt by those who took action, peacefully demanding accountability.

American citizens have a constitutional right to protest for their civil rights, as illustrated by the First Amendment. I always think: “What tangible steps do you think Black police nationwide can do to reassure our communities?”

What lessons do you think Black officers can teach police officers nationwide?

I believe we can support more responsive community engagement, empathy, and understanding of Black and minority communities across the nation.

Cultural competency is one of the most important skills that makes a more responsive and adaptable officer and American citizen. Fostering that rapport only serves to help the community that one serves and protects.

What are the most important things officers can learn from the community?

Being a police officer in a metropolitan city can be a trying yet rewarding task. The most important thing officers can do within a community is understand whom you are serving, remember why you joined the force, remember to be accountable for your actions daily.

Remember your core values of honesty, integrity and equitable justice. The key is to remain understanding and culturally competent while keeping the interests of the community at heart.