Swimming from Alcatraz, and the escape from dementia

Dr. Charlie Farrell is helping to distance dementia patients from the prison they often live in, one stroke at a time. 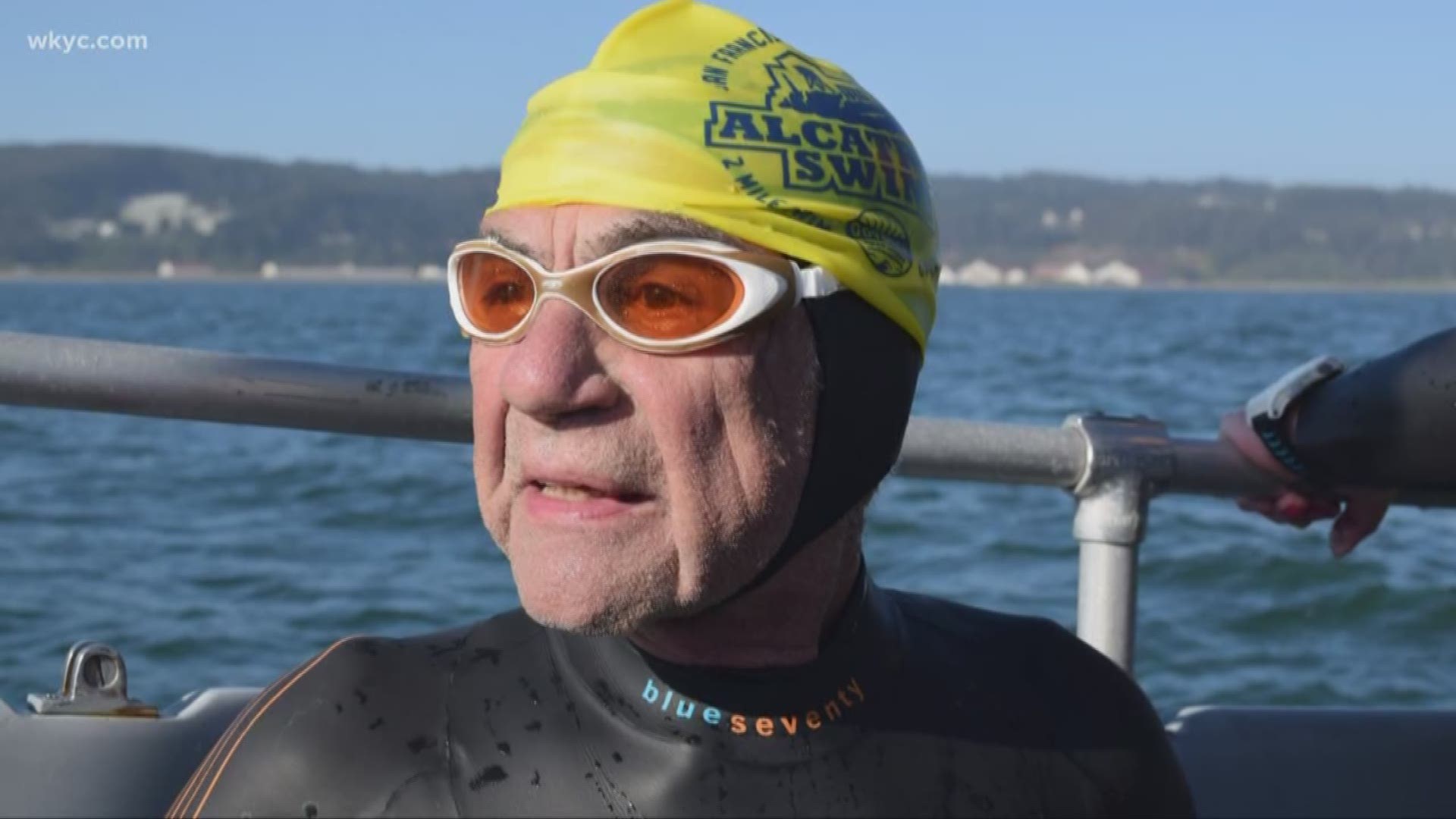 WESTLAKE, Ohio — Currently, there are 5 million people living with dementia. While there are steady efforts to find a cure, Westlake native, Dr. Charlie Farrell, set out in July to educate families on how to care for their loved ones at home.

He did this by swimming from one of the most famous prisons in the world -- Alcatraz. The metaphor is no coincidence. This is about an escape for all those suffering from a disease that often makes them feel like they're trapped.

“Dementia can really turn into a prison in a person’s own life," Dr. Farrell said.

He knows all too well what that looks like, too. His wife Carolyn living with Lewy Body Dementia for years before she died in 2015. Slowly, symptoms hindering her every day routine. As a vascular surgeon, Dr. Farrell wanted to fix it. His way didn't work, though.

“What really happened was Carol went had gone from being very subtle and easy to live, to really getting very agitated, and I’m thinking, ‘Well, I’m doing all this stuff, what are you so upset about?’ Well what I had done is taken her life away," Dr. Farrell told us.

He made changes, and found ways to adjust Carolyn's environment in a way that worked for her -- allowing her to do the things she loved, like cooking.

"The first thing we did was take out all the ingredients and put them in a line for her," Dr. Farrell said.

You see, it's crucial, according to Dr. Farrell, for families caring for dementia patients at home, to learn the sea of frustration they wade in every day.

“It’s virtually impossible to teach a person with dementia how to change and do things our way," he said. “It was our job to learn when she was frustrated and when there was a problem. And sometimes it took a long time to understand what the entity was that was causing her frustration.”

That's why Dr. Farrell started the Farrell Foundation, bringing together Dementia and Alzheimer's patients, and their loving caretakers. They teach, through art and music, ways everyone can adjust better at home.

“We wanted to make the program and the foundation accessible to everyone so all of our program are at no charge," Dr. Farrell said. “Pretty much everything we’re doing now is based on what (Carolyn) taught us to do so that her life could be meaningful to her.”

The foundation wants families to feel less alone, bringing more awareness to the cause. So, Dr. Farrell and his Luise trained in Lake Erie for the big swim.

“We had about four weeks to swim in comparable water, at least from a temperature standpoint," he said.

The one and a half mile swim to freedom was tough. But the former marathoner was determined to get to land. He was guided by his family, and Luise.

They got it done, while conquering currents, murky water, and cold spots. Where they ended, was in a place of comfortability and into the arms of those who love them.

It's no different for dementia patients who navigate their changing lives every day.

“They have the same wishes and hopes and aspirations as we do and they’re no different than we are," Dr. Farrell said.

Their swim may be over, but the mission isn't. If you'd like to donate to the Farrell Foundation, click HERE.