Homeless Hookup: Lending a hand to those less fortunate

One man is helping the homeless every day by collecting donations for them via social media and personally handing them out day and night. 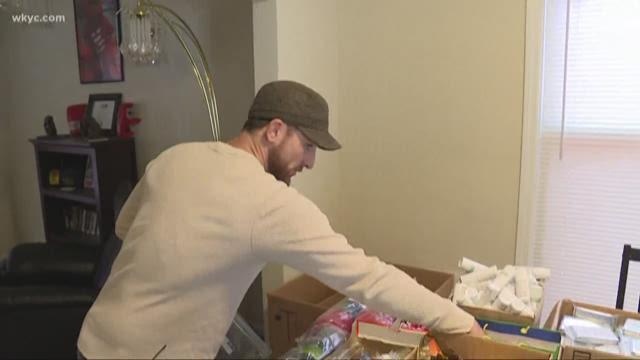 One man is helping the homeless every day by collecting donations for them via social media and personally handing them out day and night.

But, he needs your help to make sure there are enough goods to go around.

Dean Roff spent his weekend living outside to help show people what it’s like to live homeless.

This Navy veteran and former MMA fighter is now those who have to live out in the cold. He serves as a middle man for online donors and people who are homeless.

Most of the work is done via social media. Dean requests items on Facebook, GoFundMe, and Amazon Wish lists. The items are sent to his home where he prepares them in gallon-sized bags to be handed out.

“It’s the people who are donating that are really the one’s doing this. If it wasn’t for them, it couldn’t be done at all,” said Roff.

Items that are donated to Homeless Hookup end up in Roff’s dining room where he separates and packages them into gallon-size plastic bags. Then he takes to the streets to hand deliver the care packages, capturing it all live on Facebook.

“I go live when I hand out donations so people can actually see their donations going to work. Too many times you just throw donations in a bin and you’re like ‘I did my thing’,” he said.

“It kind of humanizes them a little bit because too many times we see them as part of the sidewalk. And it’s tragically sad.”

Roff was homeless at one point and his father died a homeless man who had to be identified through dental records when his body was found. That’s part of why this fight is so personal.

“My goal is to never let anyone feel that desperation. And for the ones that do, it’s to let them know that there are people out there who care,” said Roff.

“It’s the smallest things that can make the biggest impact sometimes.”

And if you don’t have the means to donate, he suggests we at least do our best to treat the homeless with dignity and respect.

“Make a small gesture. Say ‘hello, hey how are you, stay safe out there, stay warm, I’m praying for you, good vibes for you.’ Anything.”

If you’d like to support Roff’s efforts, use the links below.