A former member of Cleveland’s 'King Kennedy Boys and Girls Club' Lexus Spence, decided to get married in the gym at the east-side club to set an example for the children. 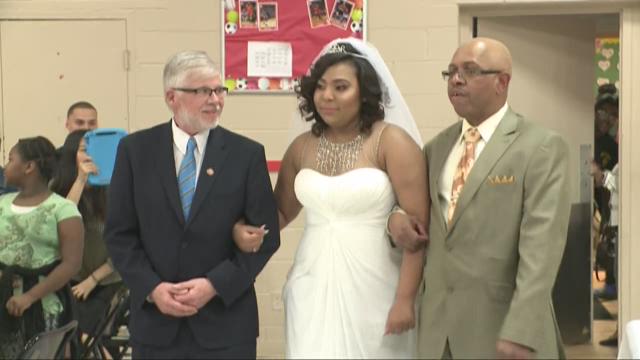 A former member of Cleveland’s “King Kennedy Boys and Girls Club” Lexus Spence, decided to get married in the gym at the east-side club to set an example for the children.

“I just want them to know and see… you can go to college. You can love… you can do anything you ever want… I want them to see what true love is, because a lot of them don’t know,” Spence said.

Spence, 23, credits the club with being a sanctuary for her, during what was sometimes a rocky childhood.

The idea came from the president and CEO of the Boys and Girls Clubs of Cleveland, Ron Soeder, who also gave Lexus away with her cousin Lee Gordon.

Both served as surrogate father’s during Spence’s childhood.

"With those two people, I have the best dad I could ever hope and wish for," Lexus said.

The story is also one of true love.

Spence and her now-husband Roy Edwards met at Tiffin University. Roy tutored her in math and the romance developed. “I’ve been waiting for this day to happen since I met him. To know it’s already happened and to hear Mr. and Mrs. Edwards… It’s just everything that I could hope and wish for,” Lexus tearfully remarked.

“I’ll always be there for her, because I’ll always love her. Love is powerful to me,” Roy said.

Roy Edwards waits for his bride-to-be, Lexus Spence, to walk down the aisle.

The gym wedding likely sent a strong message to the mostly young Boys and Girls club members watching in their seats. Two young people, dedicating themselves to one another for a lifetime and graduating from college is a tale that is all too rare in the neighborhood surrounding the East 59th street community.

“Lexus and Roy standing up in front of their community and taking their vows… that’s not a natural experience for these kids,” Soeder said. The message sent Friday night was a powerful one. “You can find that partner… you can make that last forever,” Soeder said.