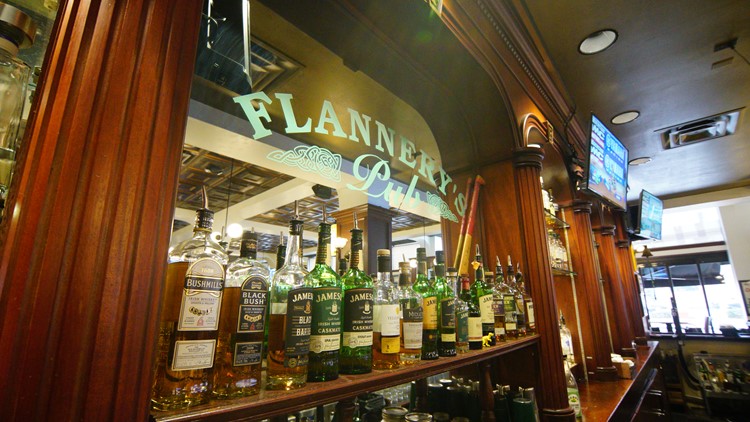 Photo by: Matt Frieden
A new flair to Flannery's pub

CLEVELAND — Denis Flannery opened his namesake bar in 1997 because he wanted to create a central gathering place for Cleveland’s Irish-American community. Of course, you need not be from the Emerald Isle to enjoy Flannery’s, as evidenced by 23 years of robust success in the heart of downtown.

Each year, thousands of thirsty, hungry revelers descend upon Flannery’s to celebrate Saint Patrick's Day, making it one of the busiest bars in town on that day. This year, guests who visit will enjoy a whole new view alongside their perfectly poured pint of Guinness and thick Reuben sandwich.

New owner Doug Petkovic, who is a partner in Michael Symon Restaurants (which has no stake in Flannery’s), invested considerable time and money improving nearly every aspect of the 8,000-square-foot, 160-seat restaurant. From the ceiling to flooring – and pretty much everything in between – the changes have given the old bar a fresh look.

"We wanted to make sure we kept what Dennis Flannery started a long time ago", says Petkovic. "That's to keep this a local pub for everyone that lives in the neighborhood. We feel like we've kept that feel to it."

There is new furniture, lighting and flooring throughout, including slick wood floors that replaced old tile in the bar and new carpeting that pads the dining room. Fresh paint graces the walls and ceilings, including a colorful new mural, and the entire space has a more open feel thanks to some physical changes. A central drink rail in the bar was eliminated and a rampart of built-in banquettes diminished and pushed back towards the dining room, moves that greatly improve flow.

A trimmer menu means more attention can be focused on individual dishes. Classics like kraut-stuffed Reuben balls, corned beef sandwiches, fish and chips, shepherd’s pie and meatloaf and mashers all have been upgraded. Prices, however, have largely stayed the same.

With the high-profile departure of Chinato and recent shuttering of Greenhouse Tavern, East Fourth Street has been in the news lately for all the wrong reasons. But Petkovic says that neither, in truth, reflects poorly on the state of affairs on 4th Street specifically or downtown in general.

"Everyone could not be more vibrant on East Fourth Street right now," Petkovic firmly states.

Chinato departed after 10 good years – and the space was promptly snatched up by another Cleveland mega-chef, Dante Boccuzzi. Greenhouse closed for reasons other than a straightforward lack of business and the space likely will be claimed soon.

The exterior of Flannery's Pub in downtown Cleveland
Matt Frieden

With the Tribe’s Opening Day just weeks away, Petkovic and the whole of East Fourth Street are eager to show visitors a great time.