'What's New' with an old favorite. 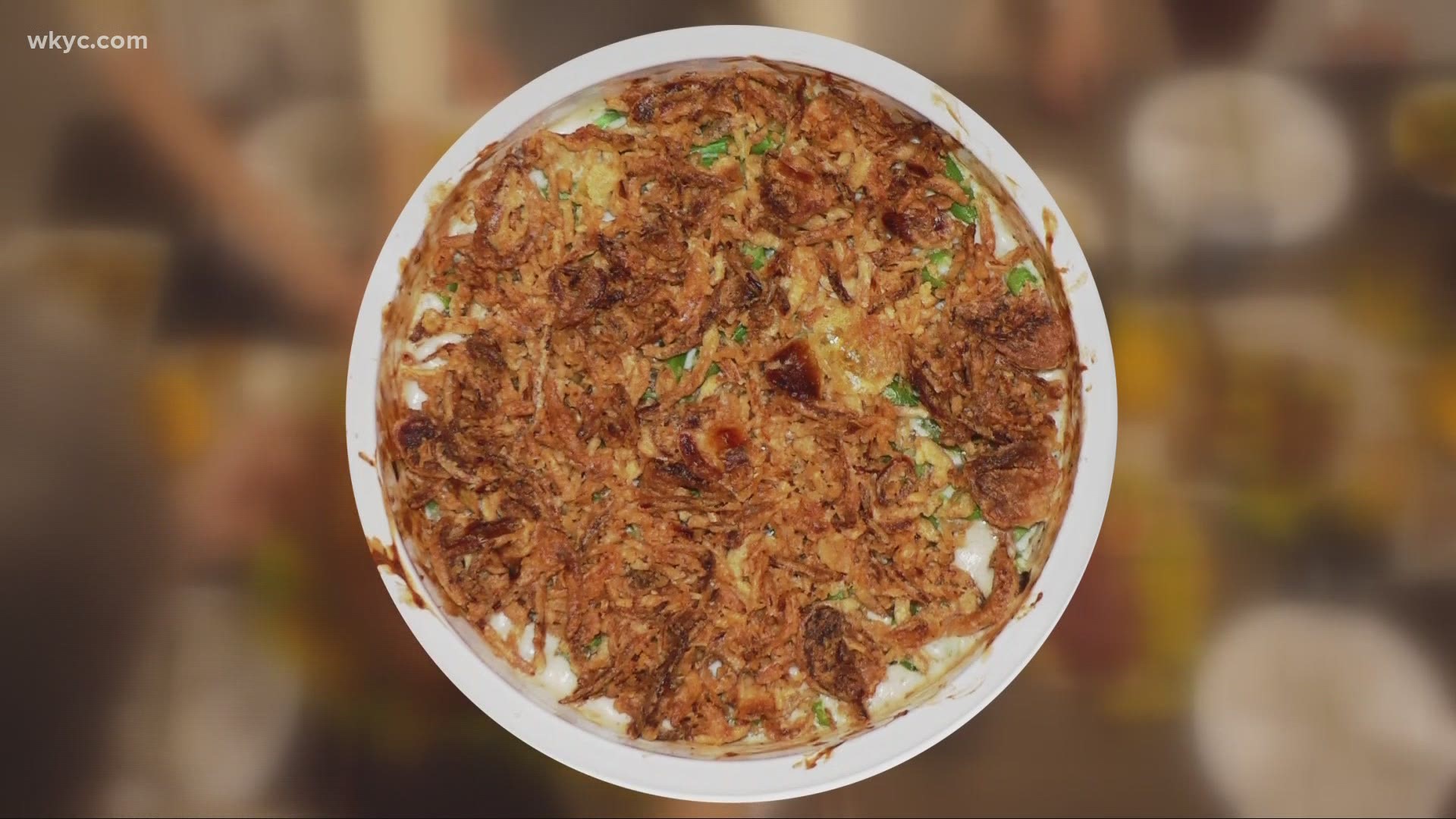 Did you know green bean casserole is one of Ohio's favorite Thanksgiving side dishes?   It came as a surprise to many...probably because the first thing that comes to mind is green beans drowning in cream of mushroom soup with crunchy onion things on top.

Here's how some of YOU have spiced up one of Ohio's favorite side dishes. By the way, my mom will be sharing her stuffing recipe later on! Stay tuned!

Cut bacon in bite size pieces, chop onion- cook bacon and onion in skillet until onions caramelize. Drain as much fat off as possible (I use a large strainer).

Cook in over for approx. 45 minutes. Put another small can of French fried onions on top. Put back in oven for about 10 minutes, and keep an eye on it so topping onions do burn. Then, enjoy!

There are no exact measurements to this recipe, so if your cooking for a larger group or something sounds particularly good, go ahead and increase or decrease amounts as desired. I’ve even used cream of chicken soup in a pinch or if someone doesn’t like mushrooms.

Cook bacon in a microwave on microwave-safe plate for 2 minutes until slightly cooked. Lay the bacon on top of the green beans.

Combine the brown sugar, melted butter, soy sauce, and garlic powder in a small bowl. Pour the butter mixture over the green beans and bacon. Bake uncovered in the preheated oven for 40 minutes.

I sauté Onions in 1 tbs of butter with chopped celery and 1 clove chopped garlic, then use cream of potato soup instead of mushroom soup with 1/2 cup of half and half and 1/4 cup of sour cream.

I bake at 350 degrees until it bubbles (up to 30 minutes), then top with French’s crispy fried onions and bake 3-5 more minutes until they are crisp and brown. After removing from oven, top with crisp, crumbled bacon

Alternate layers of drained, cooked beans and onions in a casserole dish. Mix soup and 1/4 cup (or more) bean water, and pour over the beans and onions. Sprinkle more French fried onions and the cheddar cheese on top. Bake, uncovered, at 350 degrees for 35-40 minutes.

Rick Mason: "Here is a great one"

In a large skillet over medium heat, melt 2 tablespoons butter. Add onion, and sauté until it begins to soften (about 4 minutes). Add bell pepper and mushrooms, and cook until softened and most of the liquid has evaporated (about 8 minutes). Season with 1 teaspoon salt and 1/4 teaspoon pepper. Set aside to cool.

Prepare an ice bath: Fill a large bowl with ice and water and set aside. Bring a saucepan of water to a boil. Add beans,= and cook until bright green and just tender (4 to 5 minutes). Drain then plunge into ice bath to stop cooking. When cooled, toss drained beans with mushroom mixture and set aside.

Melt the remaining 4 tablespoons butter in a medium saucepan over medium-low heat. Add 1/4 cup flour, whisk constantly until mixture begins to turn golden (about 2 minutes). Pour in milk and continue whisking until mixture has thickened (about 3 minutes). Stir in cayenne, nutmeg, and the remaining teaspoon salt and 1/4 teaspoon pepper. Remove from heat and let cool to room temperature, stirring occasionally. Pour over beans and toss to combine.

Heat canola oil in a medium skillet over medium-high heat. Toss shallot rings with the remaining 2 tablespoons flour. Fry the shallots in batches, turning frequently, until golden brown. Transfer to paper towels to drain. Place in an airtight container and set aside until ready to serve.

Heat broiler, positioning rack about 8 inches from heat. Cook casserole covered until mixture is bubbly and heated through (about 10 minutes). Uncover and cook until top is golden brown (about 30 seconds). Sprinkle fried shallots over top and serve immediately.

Our own Dave Chudowsky even shares his own recipe back in 2018: 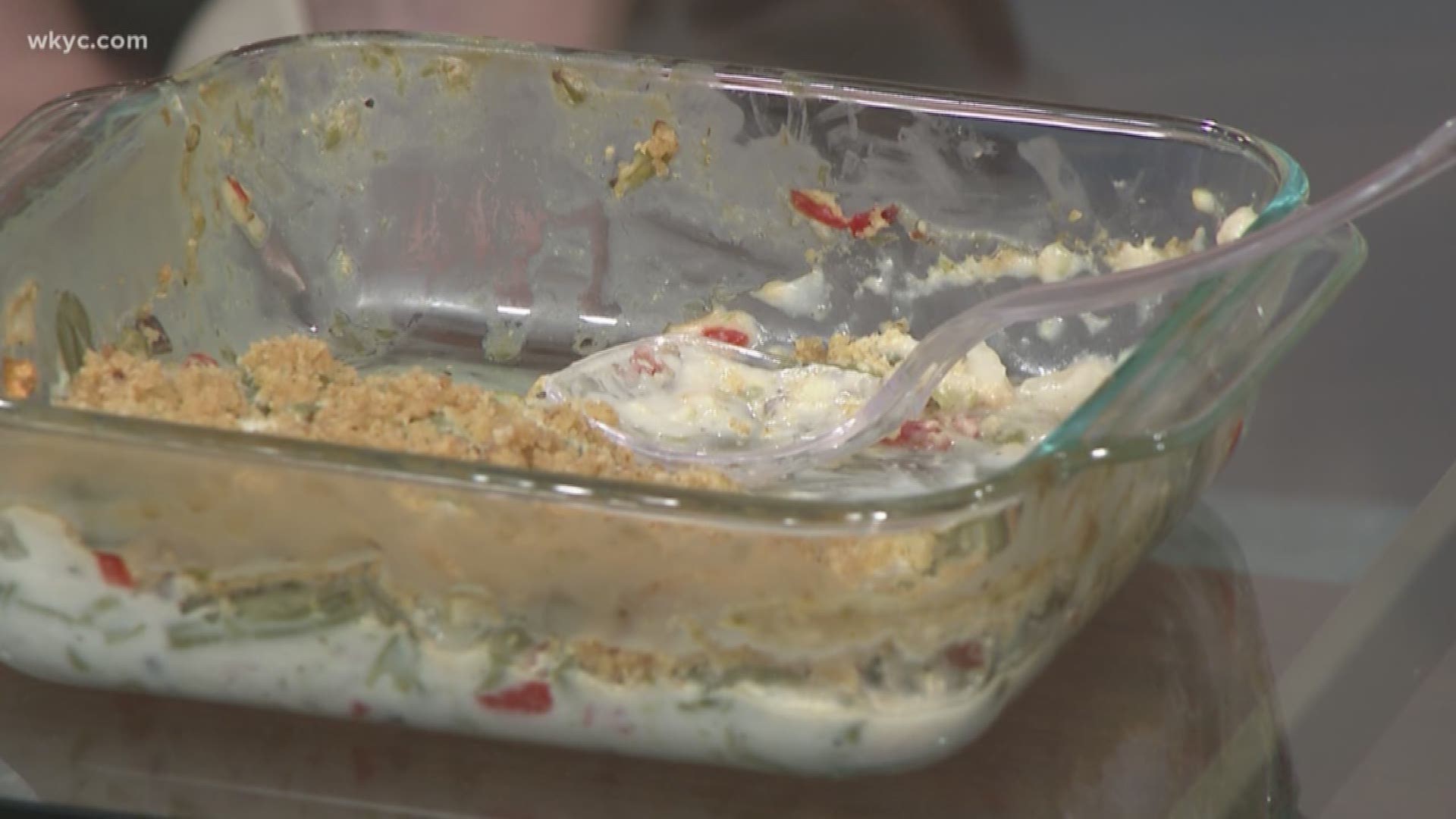