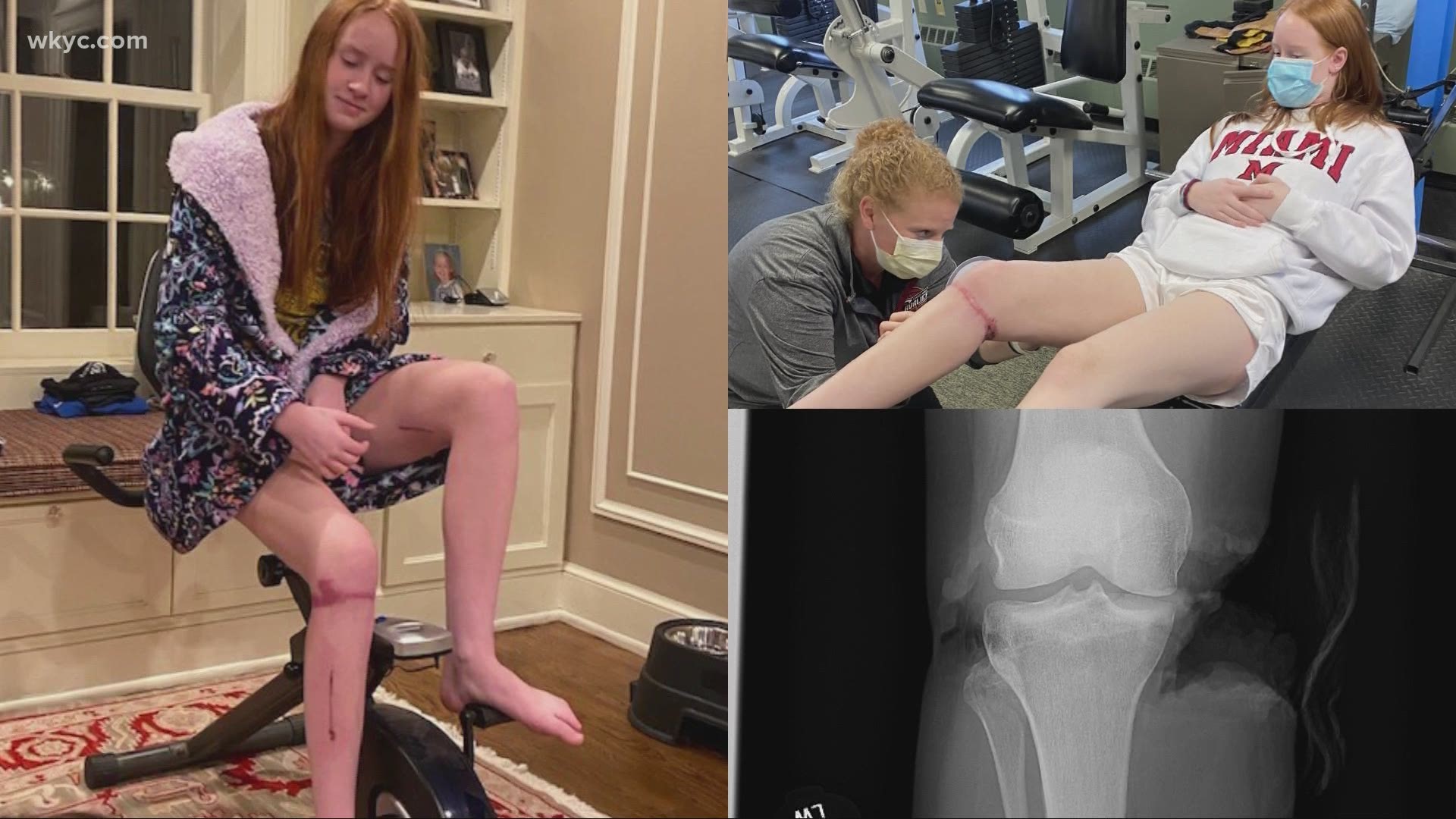 CLEVELAND — Caroline Rarick: Tall and athletic, a force on the volleyball court, but also drawn to water all her life.

"I grew up a lake kid," the Gilmour Academy alum tells us. "My family goes to the lake. We bond at the lake."

Last August, just one day after turning 18, Caroline and a group of close friends were enjoying the day on Lake Roaming Rock. It was a cloudy day, but the teens didn’t let it stop them from enjoying the day jet skiing and tubing.

By 5 p.m. the group was heading in. A friend drove, while Caroline stood on the back of the jet ski, guiding the tow rope and innertube into the dock.

She remembers a gust of wind.

"The tube blew up and out," she recalled. "I was holding onto the rope - so it kind of took me with it. I just remember feeling something like tug.

"I knew I felt pain, so I knew something had happened, but I didn't know until I looked at it like how bad it was."

Credit: The Rarick Family
So many of Caroline Rarick's happy memories are connected to the lake. But an accident last August changed her life.

The tow rope had pulled Caroline into the water, wrapped around her leg just below the knee and dragged her for a short distance. The injury was catastrophic.

Acting like a saw, the rope cut through skin, muscle, and bone. In the process, it also severed a vital artery.

Afraid she might pass out; Caroline asked her friend to hold her up in the water. Thankfully, she was wearing a life vest.

Loaded onto the jet ski, she was losing a lot of blood. The friend noticed a boat and recognized the familiar faces on board: two doctors, one a pediatrician and the other an anesthesiologist.

They got Caroline on the boat and immediately fashioned a tourniquet as they also called 911. The doctors detected only a slight pulse in Caroline’s leg.

An ambulance arrived and started out for UH Geauga Medical Center, about 30 miles away. At the time, Caroline's parents were at a graduation party in the western suburbs of Cleveland.

Jen Rarick had tucked her cell phone away, and recalls it vibrating. She didn't answer the first time, but then it vibrated almost immediately again: the same number. She instinctively knew something was wrong, and a close friend told her Caroline had been in an accident.

"We got up and ran to our car," Jen remembers. "We didn't even know where we were going to be going, but we just got in our car and started heading back to the east side."

The Raricks met the ambulance at the hospital. Jen wasn’t prepared for how bad Caroline's injury was. Already, the hospital was in contact with UH Cleveland Medical Center, a level one trauma facility.

"It was a race against time, at this point, to restore the blood flow to her leg," Jen said.

Credit: The Rarick Family
Doctors restored blood flow to Caroline's leg, and repaired the damaged muscle and tissue as best they could. But she would face more surgeries, infection, and many other hurdles on her road to recovery.

"This was a very devastating injury,” Dr. Vikram Kashyap Chief of Vascular Surgery at UH Harrington Heart and Vascular Institute, said. "The leg itself was damaged enough that we considered doing something that we rarely do, which is an urgent amputation as the first best step to try to save the patient and get the best outcome.

"That did cross our minds when we first saw her, and the reason for that is she had no blood flow to the leg."

Working in her favor were Caroline's age, health, and access to the level one trauma center, where a team of vascular, orthopedic and plastic surgeons were assembled together. Five hours after the initial accident, Caroline headed into surgery, but she had one question first for Dr. Kashyap.

"I just remember asking, 'Am I going to lose my leg?' she remembered. "And there's, like, a pause, and he said, 'We're not scheduled for an amputation tonight.'"

The team would try to restore blood flow to the volleyball standout's leg and repair the damage as best they could. Time would tell, but if it didn't work, the teen could lose her leg down the road.

In the operating room, the surgeons went to work, first performing a bypass on the severed artery using a vein from Caroline’s good leg, all while repairing the broken bone along with damaged muscle and tissue. They were relieved when blood flow was established to Caroline’s leg, the first hurdle of many cleared.

Credit: The Rarick Family
There were no guarantees about what Caroline's leg would be like. But she never doubted her ability to heal. Once the doctors saved her leg, she knew the rest was up to her.

Once out of surgery, Caroline went to ICU. As the anesthesia wore off, she felt relief in knowing she still had her leg.

Doctors and nurses checked the pulse in the injured leg every two hours. Caroline was on heavy antibiotics, considering the injury happened in lake water.

But after four days in the Trauma ICU and a total of 12 days in the hospital, Caroline went home. Her leg was responding, but there were no guarantees she would have anything close to normal function.

Once home and unable to climb stairs, Caroline slept in a bed on her house's first floor. She had a wound vac, a device that can help wounds heal faster. She also fought an infection, needed skin grafts and more surgeries in the weeks ahead. Her leg had atrophied, and her remaining muscle eroded.

Through it all, Caroline remained upbeat. The trauma team had saved her leg. Now, she would do the rest.

"From that point on, I was going to do everything I could to get better."

Credit: The Rarick Family
Caroline hugs her teammate and friend, who was with her when the accident happened. The Gilmour Academy Lancers won the OHSAA State Volleyball Championships. Caroline was sidelined for the season, but there to celebrate with them.

That included months of grueling physical therapy, as well as the added pain of being sidelined for her senior volleyball season. Caroline supported the Gilmour Lancers as they won the state championship, but she had her own victories, too: Graduating from wheelchair to crutches, and then walking on her own by Christmas.

"I think it comes down to her resilience, her grit," said Kashyap, who was amazed with Caroline's progress when he saw her months after surgery. "You know, somebody that's able to withstand this type of trauma."

Credit: The Rarick Family
Caroline gets some affection from her sister Anna, who is two years younger, and also on the volleyball team.

By April, the teen who almost lost her leg was cleared to run again. And earlier this month, Caroline Rarick walked across the graduation stage, with not even the slightest limp.

The scars on her leg are not a testament to what happened on Aug. 1. Rather, they are a reminder of what Caroline is made of.

"She's tough, very tough," her mother said. "She's the strongest person I know, and I know that she can do anything she puts her mind to. I'm not worried about her. She will thrive."

Later this summer, Caroline will walk onto the campus of Indiana University. Prior to the accident, she intended to major in biochemistry, with plans to go into medicine.

That decision is now cemented by the appreciation she feels toward the staff at UH Cleveland Medical Center and the physical therapists who helped her recover.

"I'm definitely very thankful for everyone at UH and all their research in those fields," she says.

Credit: The Rarick Family
You may think Caroline's scars on her leg are a reminder of what happened. Rather, they serve as a testament to what Caroline is made of.