1 year after video is seen around the world, a year of special firsts for Geauga County boy

In January, JO Zippay marked one year in remission from leukemia. Now, he's happier than ever! 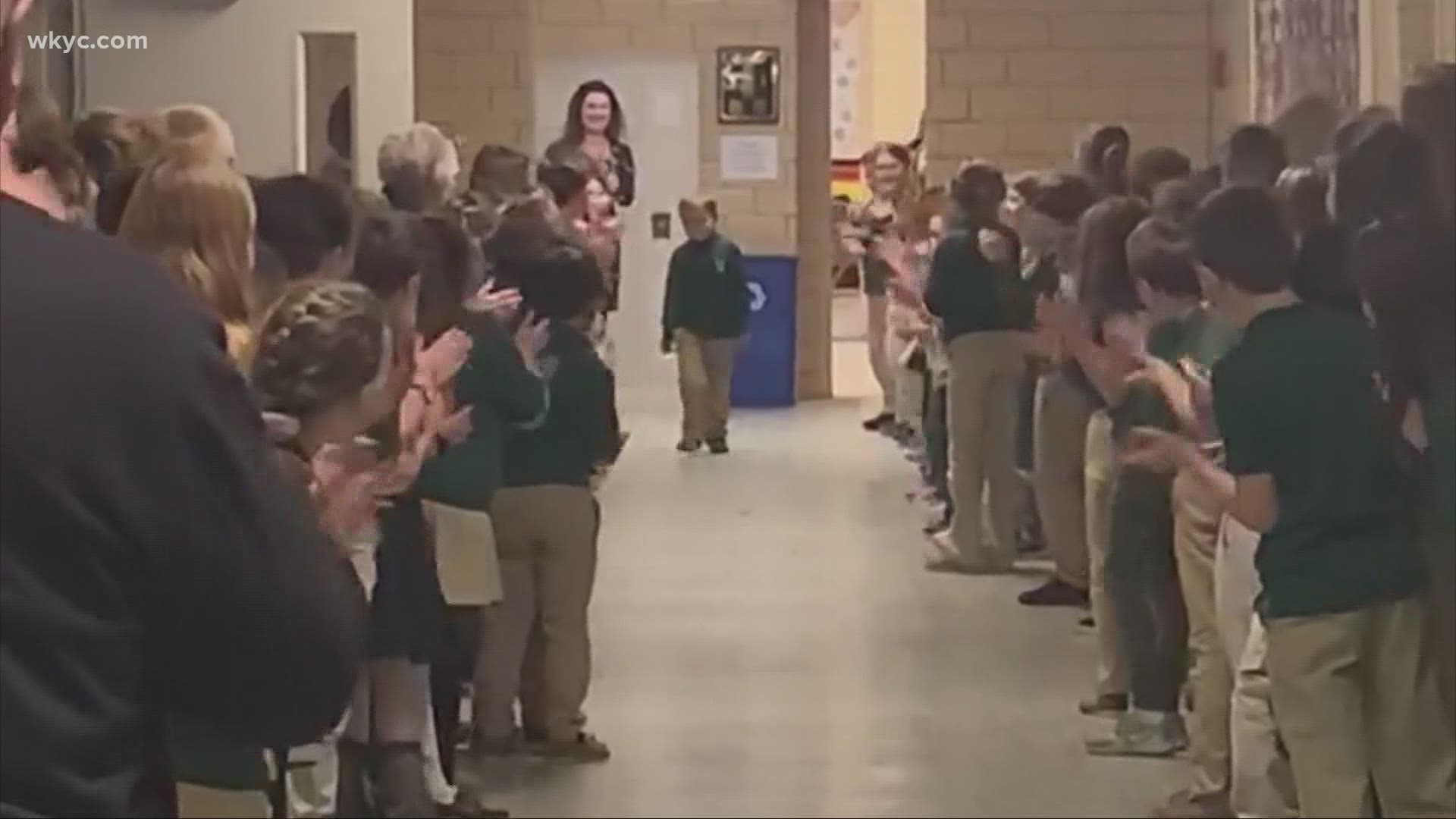 At the time, JO had just completed three years of treatment for Acute Myloid Leukemia, and his school--St. Helen's in Newbury--welcomed him back in a touching video that soon went international.

"It went super viral," His mom Megan told us at the time. "It spread to other countries. It made Germany's newspaper and Taiwan and Paris, and it's unbelievable that it went so far."

One year later, we wanted to check in on JO to see how he's been doing and how he spent the last year. His parents, John and Megan, shared some updates via email.

"It was a great summer and a lot of firsts for JO," they wrote. "Some first moments, since now we don't have to worry about his meta port, were jumping on the trampoline with friends, going sled riding, and learning how to skateboard just to name a few."

They added JO has started second grade and is loving it, and he also hasn't wasted any time now that he's allowed to play sports.

"JO played point guard on the basketball team and played soccer in the fall," his parents told 3News. "He currently is in karate and he earned his orange belt."

The Zippays also told us about some incredible experiences JO has had over the last year - including the gift of a brand new room.

"A foundation called Special Spaces which provides a new bedroom for children during or post-treatment awarded to JO with his new room," the email said. "He has the coolest army theme room we could have ever imagined."

But a new room isn’t all – JO was also invited backstage at a professional wrestling match, and he visited Delta headquarters where he got to fly a simulator.

"I got to go in like rain and then like they put me in snow and then I had to do the landing," JO told 3News' Jay Crawford.

He even visited the Ohio State Capitol, where he met with Secretary of State Frank LaRose. JO told Jay all about getting to sign his name in the building's rotunda.

"I was scared because we were really high," he said of his special day. "I didn't want to fall through all the buildings...I looked down and it was like, it was like I was almost hiding the clouds."

Credit: Megan Zippay
JO signed his name in the rotunda at the Ohio State Capitol.

But most special of all, JO is finally feeling good, and well on his way to long-term remission.

"We are so happy and proud of JO hitting his one year milestone of being out of treatment," his parents wrote. "We love seeing our son so happy and not struggling through the day from steroids and chemo."

"I'm happy because I'm done with all the sickness," JO added. "I didn't really like when I had my leukemia...I feel like much better now."

John and Megan Zippay ended their letter to 3News by remembering those still in the middle of their own battles:

"We are counting our blessings that those days are behind us," they said. "We did not let Covid ruin our year by any means and we continue to look at the glass half full as we learned to do while JO was in treatment. Needless to say, we made the best out of this difficult time we continue to pray for those still in the fight and are so grateful for our many supporters. Thank you and God bless."

The Zippays continue to support other local families dealing with health challenges on the "Help JO FIGHT Leukemia" Facebook page, including Jacob's Journey and Lucas Strong. If you're interested in learning more or helping, you can find Jacob's GoFundMe here and Lucas' PayPal account here.

Watch our original story about JO from last February in the player below: