At a time when flights from Cleveland are in growing demand, the city's newest multi-million dollar terminal sits empty collecting dust. Even though the city continues to make money off of it, it may be costing travelers money. 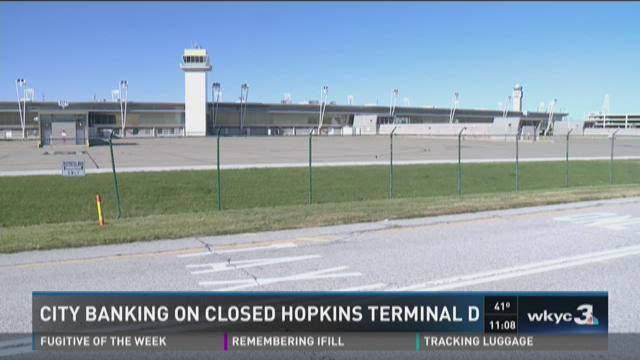 Back in the 1990's Cleveland was Continental's hub and the new terminal D was the envy of airports, a gleaming state of the art facility that could handle dozens of flights.

But when the airline later merged with United, Cleveland was eventually "de-hubbed".

Dozens of routes were cut and in turn that once-bustling terminal turned into a ghost town.

Some experts say the airline has a strong reason to keep it this way.

"What you find is airlines have attempted to control traffic and thus revenue," said Bob Mann, an airline industry consultant based in New York. "And one method of doing that, of course, is deflecting or deterring competition."

Mann says Cleveland Hopkins is not the exception.

The practice happens elsewhere, too.

An airline will lease space from an airport; then not use it to withhold it from competitors.

"So it's an opportunity cost for them, but the benefits far outweigh it," said Mann.

Channel 3's Andrew Horansky wanted to know if that could really be happening here at such a big time for Cleveland.

First, we turned to the airport which for months had promised an interview, then backed out.

We turned to the city too, which had originally agreed to cooperate, but later turned down our request.

All, while we know, they cashed checks from United and continue to do so, earning more than $1 million dollars a month for the next 13 years whether the gates are open or closed and travelers are left with fewer options.

"That's a strategy, whether it's Cleveland or Love Field in Dallas or another airport where you have a scarcity of facilities and a lot of demand," said Mann.

At one time, Cleveland's fares were among the highest in the country, due in no small part to United's hold on the market.

Yet today we now only fly direct to about 15 cities, which isn't the greatest for a global destination.

"You definitely have to pick and choose your routes and where it's really worth going because you don't want to spend all day traveling," said frequent traveler Jackie Cerar. "You want to get to your destination."

"They hurt the city because they don't want to fly," said Bob Dumbrys, a chauffeur that services Hopkins. "They might drive or they might go some other transportation,."

We tried sharing these concerns with United.

In turn, the airline released a statement that ignored our questions, telling us in part that "we continue to honor our existing lease agreement."

Eventually, we did track down Cleveland's mayor at a public event.

He backed United up while telling us the issue is complicated.

"Should United have that lease? It's a legal right," said Mayor Frank Jackson. "I mean, they have the lease. And you can't enter into a contract and then change your mind down the road. And we as the city will support anything that will provide additional revenues and jobs."

When pressed on the idea of allowing United out of the lease in order to open up more competition, which in turn could mean more flights and more jobs, Jackson responded, "Again, you're trying to simplify something that's not that simple."

What's not simple is the unique situation that exists here in Cleveland.

When we reached out to a number of carriers about their interest in more flights and gates at Hopkins, we heard more than once that carriers are always keeping an eye on the market and demand for service here.

But as one carrier put it, Cleveland is unique in that it's run by the city and politics often seems to play a part in the process.