Could the end of federal unemployment benefits close the gap on the worker shortage?

While some economists say it could hurt the economy by taking away some consumer spending, others argue, it may help solve the nationwide worker shortage. 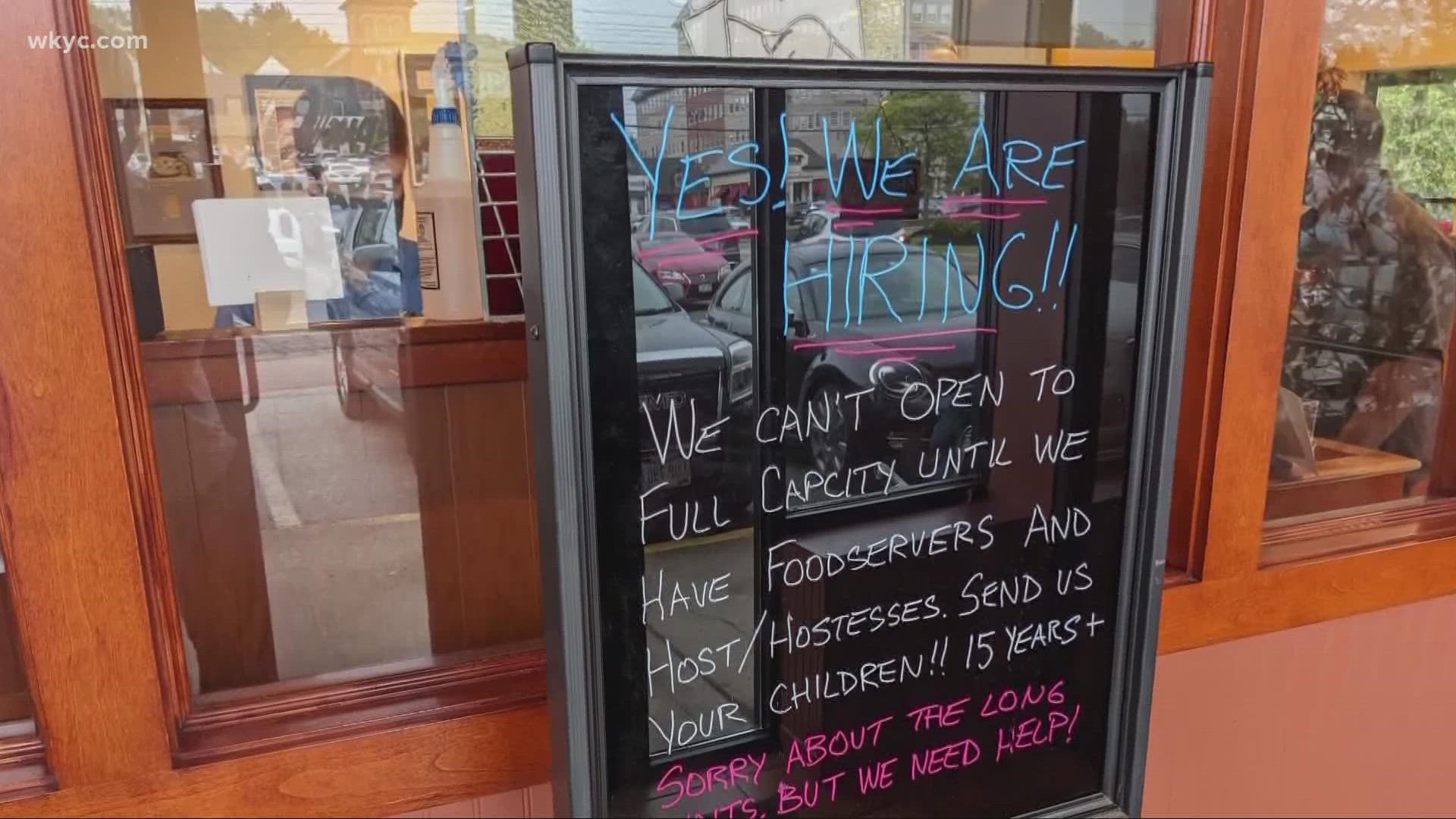 CLEVELAND — The Labor Day holiday is meant to celebrate U.S. workers, but for many local businesses, workers are hard to come by. Now, millions of Americans face losing federal unemployment benefits, which are set to expire Monday. While some economists say this could hurt the economy by taking away some consumer spending money, others argue it may help solve the worker shortage being felt nationwide.

“We can’t open our restaurant full yet because we don’t have enough employees,” said Original Pancake House owner, Mike Frazin about 2 months ago.

He was having such a difficult time finding workers that he raised the pay, benefits and bonus for an open manager position to about $70,000. It still took a while, but today he’s happy to report he filled the position.

“Thankfully we have a manager starting on Wednesday,” says Frazin. “Our westside restaurant, we’re still hurting for food servers, cooks and front desk.”

The worker shortage continues to plague businesses of all kinds, from restaurants and retail to manufacturing and hospitality.

“It’s a very challenging time for employers that are looking for talent,” says Michael Goldberg, an economics professor at Case Western Reserve University.

As some economists believe the expiration of the unemployment benefit will help businesses dealing with a worker shortage, Goldberg doesn’t anticipate it playing much of a factor.

Goldberg says, “For the most part, the workforce has seen this coming and people that are looking to go back into the workforce have either entered back in or are actively looking. So, I’m not sure how much the expiration of the benefit is really going to move the needle.”

The benefits expiring on Labor Day were part of the Cares Act passed back in March of 2020, with congress extending them twice. Goldberg feels workers saw this coming and the shortage has more to do with a perfect storm.

“Students are returning back to school so some of that summer employment is no longer there,” says Goldberg. “International workers, many fewer workers came in this summer. Older workers that are worried about the delta variant and maybe contemplating retirement might just be saying, I’m not going to go back.”

Goldberg feels the worker shortages will be felt for a while. As far as what could help to fill some of the need in Cleveland, he says it may come from abroad.

“World events like what’s happening in Afghanistan and actually the ability for cities like Cleveland to tap into refugee talent,” says Goldberg. “Open our doors to Afghan refugees, not just because it’s the right humanitarian thing to do, but many of these Afghans are talented, English speaking, workers that could plug right in.”

While Frazin hopes anything will increase the amount of applications coming into his restaurants, .he says they’ll get by until then. After all, the pancake business certainly isn’t waffling right now.

“I think our July was our best month ever,” says Frazin. “So, business is great. I can’t complain. It’s almost too busy and I just want to retire so, I’m very thankful.”