The office is back, but it doesn't look the same

Northeast Ohio companies are reimagining the work model to bring employees back in. 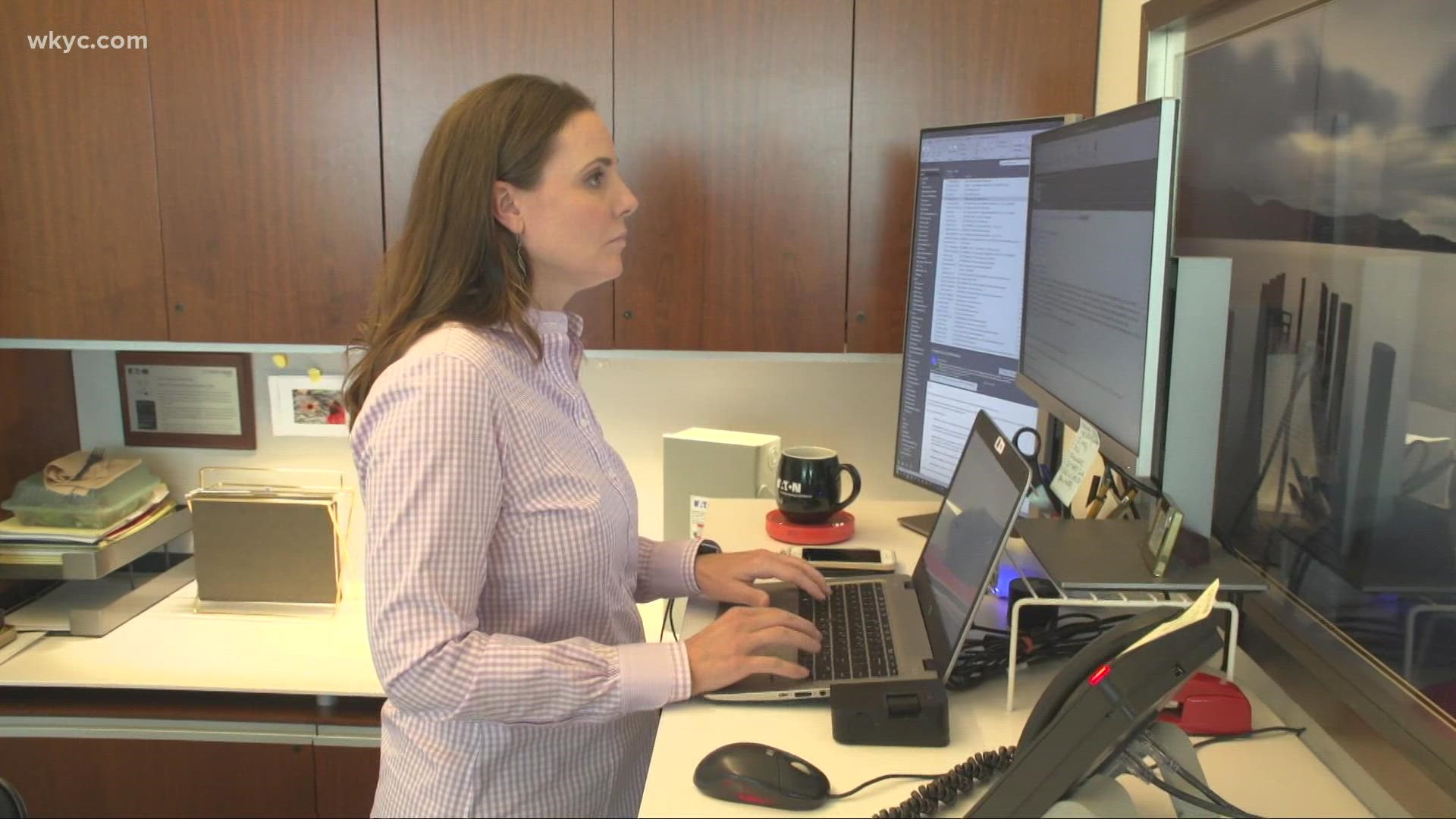 Corporate America has begun opening doors again at companies like Facebook, Microsoft and Goldman Sachs, but the view from inside is vastly different. After all, a lot has changed since March 2020, and offices have, too.

Plexiglass desk dividers, hand sanitizer stations, temperature checks and mandatory masks when moving about have become the norm. Maybe your office has adopted "hoteling" — which replaces traditional permanent seating with workspaces available for employees to claim or reserve at the start of a day. This allows them the freedom and flexibility to work where they want and when they want.

Eaton Corporation in Cuyahoga County has its own model.

"We started with, 'What's best for our people?'" Ernest Marshall, Executive Vice President and Chief Human Resources Officer at Eaton, said. "'What should we do to make sure they're safe, that they're informed, and that we are making decisions that really accrue to their benefit?'"

The 600,000-square-foot facility serves as the nerve center for this global power management company — the crown jewel of Beachwood.

Normally, it's home base for hundreds of employees, but for 17 months the hallways and other perks went largely unused. These days, making use of the building isn't as important. In a competitive job market, the writing on the wall is clear.

"To be a contemporary company and a great company that really cares about our employees, we have to change with them," Marshall told 3News.

Change for company counsel Betsy Niño de Rivera happened just as the pandemic was beginning. She found out she was pregnant, and gave birth to her son later in the year. At the same time, she was thrust into remote work.

"My husband was home, too, and we have an office, but it's really set up for one person," she explained. "So he was in the office and I was trying to figure out what a really good workstation might look like."

While working at home, Niño de Rivera's workload increased, and she soon learned that what she missed most was the separation between work and home.

"I missed being in the office," she said. "I missed having my own workstation setup and having some isolation from home life."

Credit: WKYC
"I missed being in the office," Betsy Niño de Rivera said. "I missed having my own workstation setup and having some isolation from home life."

So, Niño de Rivera is taking advantage of one of the six options offered to Eaton employees as they transition back to the workplace. Those options include: shifting hours, compressed work weeks — in which employees work longer hours in fewer days — or staying remote, just to name a few.

"Everyone is different," Marshall said. "Everyone has a different situation that they are facing, so trying to come up with a solution that is going to satisfy everyone 100% is not something that I think can happen.

"What we've learned is there's not a direct correlation between being at work and productivity. I think that's what everyone thought. Quite frankly, I was probably in the same camp, because it's a large part about how you grew up."

Credit: WKYC
Eaton offers employees six different work options. "Culture is your operating system for the company. And when you are doing great things for employees, they become advocates. And that's when you have a great culture. " Ernest Marshall, Eaton Vice President and Chief Human Resources Officer.

Production has not waned. In fact, Marshall says Eaton has done well with remote work. That doesn't mean there aren't benefits to collaboration in the office. That's why Niño de Rivera and many of her coworkers will split their time between the office and home coming in three days a week.

"I think a lot of people are eager to come back and be able to talk to people face-to-face again," she stated.

It's a schedule comfortable for her, helping balance work and home life — one of the most important perks employees seek nowadays.

When you find ways to make your employees the top priority, you build a culture for success. It works for Eaton.

"Culture is your operating system for the company, and when you are doing great things for employees, they become advocates," Marshall said. "That's when you have a great culture."