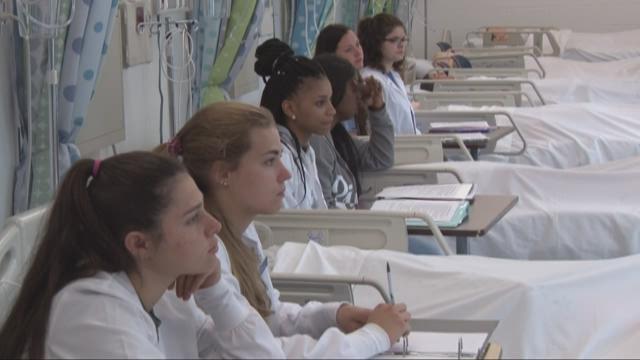 PEPPER PIKE, Ohio -- It's no secret that nursing jobs are in high demand in Northeast Ohio and across the country, but getting enough qualified people through school, into the workforce, and quickly, is a challenge.

In Northeast Ohio, Ursuline College is trying a new approach to getting its students on the path to success.

The region is projected to be short by at least 3,500 nurses over the next three years. Local colleges and universities are packed in their pre-nursing programs, but not all of those students are getting into the career.

Ursuline’s new program called "STTEP-UP," with support from the Cleveland Foundation, is an effort targeting students early in the enrollment process.

“Making the transition from a high school student into a college student is pretty significant.” Sharpnack explained.

A recipe for success in the making. It combines ingredients like academic advisors, peer mentors and professional mentors mixed with some financial aid, including free STNA testing -- a major step for nursing majors.

It’s only the first year, but it’s already benefiting students like Celina Byrd. She’s a North Royalton grad blazing a trail all her own.

Byrd discovered the “STTEP-UP” program during her orientation and it has already given her a leg up on other students, getting familiar with the nursing program.

“Since being here for two weeks prior to classes starting, I completely know the campus. I know where everything is, I know what's going on.”

The nursing field suffers from a general lack of diversity among its workforce -- be it age, gender, race, or ethnicity.

Celina hopes to be a part of the solution in that area and then take it a step further by giving back to the college and come back as a mentor to other students like her.

“Ursuline is forever," she said.

“Right now, chief nursing officers at both UH and Cleveland Clinic are graduates of our program and it's that kind of reputation that helps us. It's also that kind of mentoring because those are people who give back to the community and give back to Ursuline and many of them are offering now to be mentors for our STTEP-UP program,” said Sister Christine De Vinne, Ursuline College President.

For more information about the STTEP-UP program at Ursline, click here.