RITA & CCA TAXES: We owe them taxes every year...but why?

Many Ohioans don't understand why they have to pay a separate tax to the municipalities where they live or work. Here's an explainer. 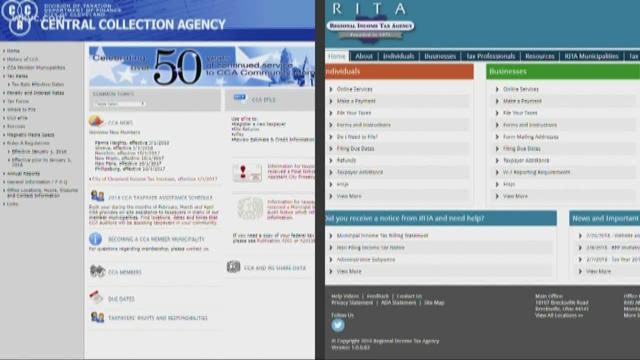 When it comes to doing taxes, a lot of people are ready to pull their hair out in frustration.

And if that stress isn't enough, many Ohioans also have to pay a separate tax to the municipalities where they live or work.

Many people don't really get why. So here's an explainer.

From emergency services, to garbage collection....and even all those potholes.

Municipalities in Ohio say they need money to pay for them, because State property and sales taxes are just not cutting it.

"Villages and townships have lost something like a billion dollars in revenue a year because of all the various cuts in state aid," says Zach Schiller of Ohio Policy Matters.

But Ohio is one of only a handful of states in the country which imposes a municipal income tax. And we're the only state which allows those municipalities to set their own tax rates.

Some of them use a company called the Regional Income Tax Agency or RITA to collect the taxes. Others turn to CCA, the Central Collection Agency.

And while these companies may have websites, very few cities explain what and why people have to hand over their money.

Don Smith, Executive Director of RITA admits, "I think it's fair to say that we as an agency can do a better job helping member cities get the word out."

If you work in multiple municipalities with those different tax rates, have fun figuring of what you owe.

"Most of the practitioners I speak with say this is more complicated than filing you Federal or State return," says Tax Attorney Robert Fedor.

You may not like it...but don't pay...and you'll get hit with late fees...even garnished wages.

And not knowing about the tax doesn't work as an excuse.

One Cuyahoga County resident told us, "I started getting bills from them. My husband and I are from the south and never paid income tax to a city before. So, once we moved to university heights we figured it out."