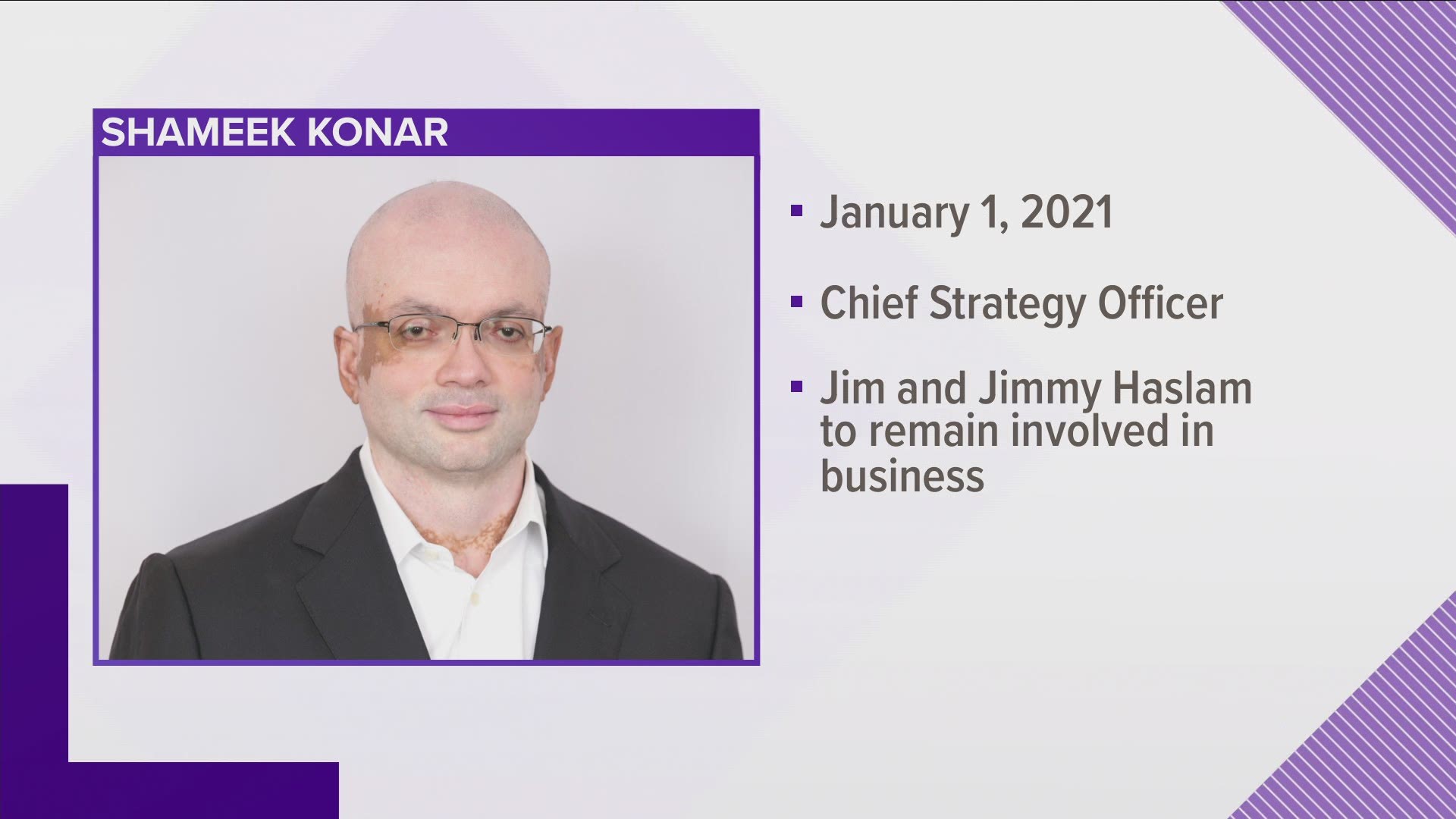 KNOXVILLE, Tennessee — Knoxville-based Pilot Co. is transitioning to a new CEO, with plans for current leader Jimmy Haslam to become board chairman in January.

The privately held travel center giant announced Tuesday that Chief Strategy Officer Shameek Konar has been tapped to become the new CEO. The switch is already happening and will continue for the next six months.

"As a family operated company for 62 years, founder James (Jim) Haslam and Jimmy Haslam will remain involved in the business as chairman emeritus and chairman, respectively," the announcement reads.

Konar has been at Pilot since 2017. He's now taking on management of human resources, technology, finance and legal, according to Pilot.

The company, a major fuel seller, said Jimmy Haslam will continue to oversee real estate operations, which include site development, a key component in Pilot growth.

Through the rest of the year, President Ken Parent will continue to manage store operations and development teams. In 2021, Konar will take over those roles, and Parent will become senior adviser to Konar and Jimmy Haslam.

The family will remain very much involved in the company, one of the largest privately held in the U.S. Whitney Haslam Johnson, daughter of Jimmy and Dee Haslam, will continue as chief experience officer and board member.

Jimmy Haslam's brother, Bill Haslam, the former Tennessee governor and Knoxville mayor, also is on the board.

"Shameek has successfully launched and grown our Pilot Energy business and become a key member of our leadership team. His knowledge of the energy sector, including expertise in the acquisition, development and operations of infrastructure assets and resources, and his deep appreciation of Pilot’s culture and values are a few of the reasons why we chose him to be our next CEO."

This isn't the first time a new CEO has been announced for the closely held operation.

In 2012, John Compton took over as CEO, a stay that lasted a matter of months.

By 2013, Jimmy Haslam was back at the helm. Then, in April 2013, federal agents descended on Pilot headquarters in Bearden, raiding the firm as part of a fuel rebate fraud investigation.

The company ended up paying more than $100 million in fines or civil settlements. More than a dozen Pilot personnel were convicted in federal court, including the former longtime president, Mark Hazelwood. Hazelwood is appealing his conviction.

In 2017, Warren Buffett's Berkshire Hathaway Inc. bought a nearly 39 percent stake in what was then called Pilot Flying J with plans one day to become majority owner.

Jim Haslam founded Pilot Corporation in 1958 with a gas station in Virginia. It's now a multibillion-dollar operation. The Haslam family is a major benefactor of East Tennessee non-profits and educational efforts.

Jimmy Haslam and his wife, Dee, also own the Cleveland Browns NFL franchise.