Cicadas blamed for rash of copperhead sightings in Texas

Local snake experts are responding to a surge of copperhead sightings all over southeast Texas this summer. 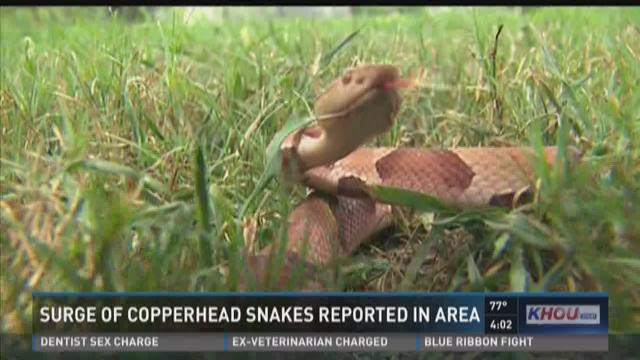 Local snake experts are responding to a surge of copperhead sightings all over southeast Texas this summer.

Kristofer Swanson with Katy Snakes said he's captured as many as 33 copperheads in two hours.

"There's no way there could be this many animals on one property. This is just insane," Swanson said. "It's really shocking."

Swanson's shock shifted into passion to learn more. He believes the copperheads are after cicada larvae that rise out of the soil near the bases of oak trees between 9 p.m. and midnight.

The larvae began rising up back in June and will continue to hatch through September.

“This time of the year, when you hear Cicadas, make sure you’re wearing shoes at night and walk around with a flashlight,” explained Swanson.

This behavioral phenomenon of copperheads and cicadas is nothing new. However, local and state experts are just learning more about it through research.

“The cycle’s been happening. We’re just observing it now,” said Swanson. “It’s more than what we could have ever imagined. We’re not worried about the ones. The stragglers do happen. This is 20 a night. Twenty a night is a big deal.”

Copperheads are venomous but not known to be aggressive.

If you encounter one, experts suggest you stay away.

“They don’t want anything to do with us. They just want to eat cicadas at this time of year,” added Swanson. “If you are bit, don’t cut it, don’t wrap it, don’t ice it. Use a set of car keys and get to the hospital.”

Swanson said all of the copperheads he’s captured are kept alive and sent to anti-venom research facilities.