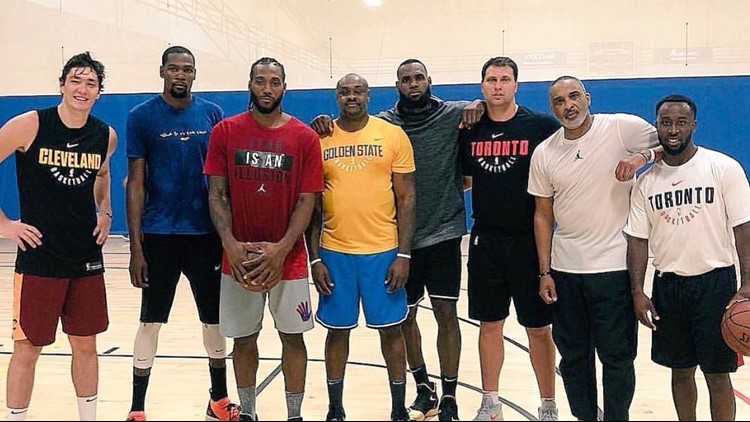 Only you wouldn't have known it during a shooting session on UCLA's campus this summer, in which he just so happened to be partnered with the 2-time reigning NBA Finals MVP, Kevin Durant.

Osman knew that wasn't the problem.

"I was nervous," Osman said with a smile at Cavs media day on Monday. "[Durant] was telling me, 'Shoot up, shoot up' and I was like 'I can't right now' because I was pretty excited."

Working out alongside Durant in and of itself would have been a thrill for Osman, whose boyish enthusiasm is still apparent as he enters his second season in the NBA. Only Durant -- a former MVP and 9-time All-Star -- was merely a co-headliner at this particular session, which also included LeBron James and Kawhi Leonard.

The workout was put together by James, who Osman, of course, played alongside in Cleveland last season. The 23-year-old native of Turkey received his invite following an encounter with James at the NBA Summer League in Las Vegas mere weeks after the 4-time MVP announced he'd be leaving the Cavs to sign with the Los Angeles Lakers.

“I met with 'Bron and he offered me to practice with him," Osman recalled. "And, you know, what do you expect me to say? I said, ‘Of course, that would be perfect.'"

And thus, there was Osman, working out alongside the consensus three best small forwards in the NBA today. A post-practice picture was snapped and shared on the Instagram account of former Cavs assistant Phil Handy, sending social media into a frenzy over the star-studded session.

Apparently there was an interesting workout at UCLA today... pic.twitter.com/WglSlSec1a

"I said, 'Wow, the three best small forwards in the world and I'm going to have an opportunity to learn from them and to workout with them,'" Osman said. "That's something that I will not forget, ever."

Osman's workout at UCLA wasn't the only All-Star instruction he's received recently. Dating back to last season, the 6-foot-8 swingman has been working with Cavs sharpshooter Kyle Korver on his jumper after primarily serving in a slashing role in his rookie campaign.

Those combined efforts -- as well as standout showings in the Summer League and World Cup Qualifiers -- have become cause for plenty of optimism surrounding Osman as he enters his sophomore season.

"He has great potential," Cavs head coach Tyronn Lue said of Osman, who averaged 9.2 points, 3.5 rebounds and 2.0 assists in the 12 games he started last season. "I think you saw that last year when he had his chance to play consistent minutes."

With James now in Los Angeles, those chances should only increase and every indication has been that Osman will take advantage of them.

Unless, of course, Kevin Durant is watching.