With their 2018 season now in the books, the Cleveland Indians will have to make several tough decisions in the coming offseason. 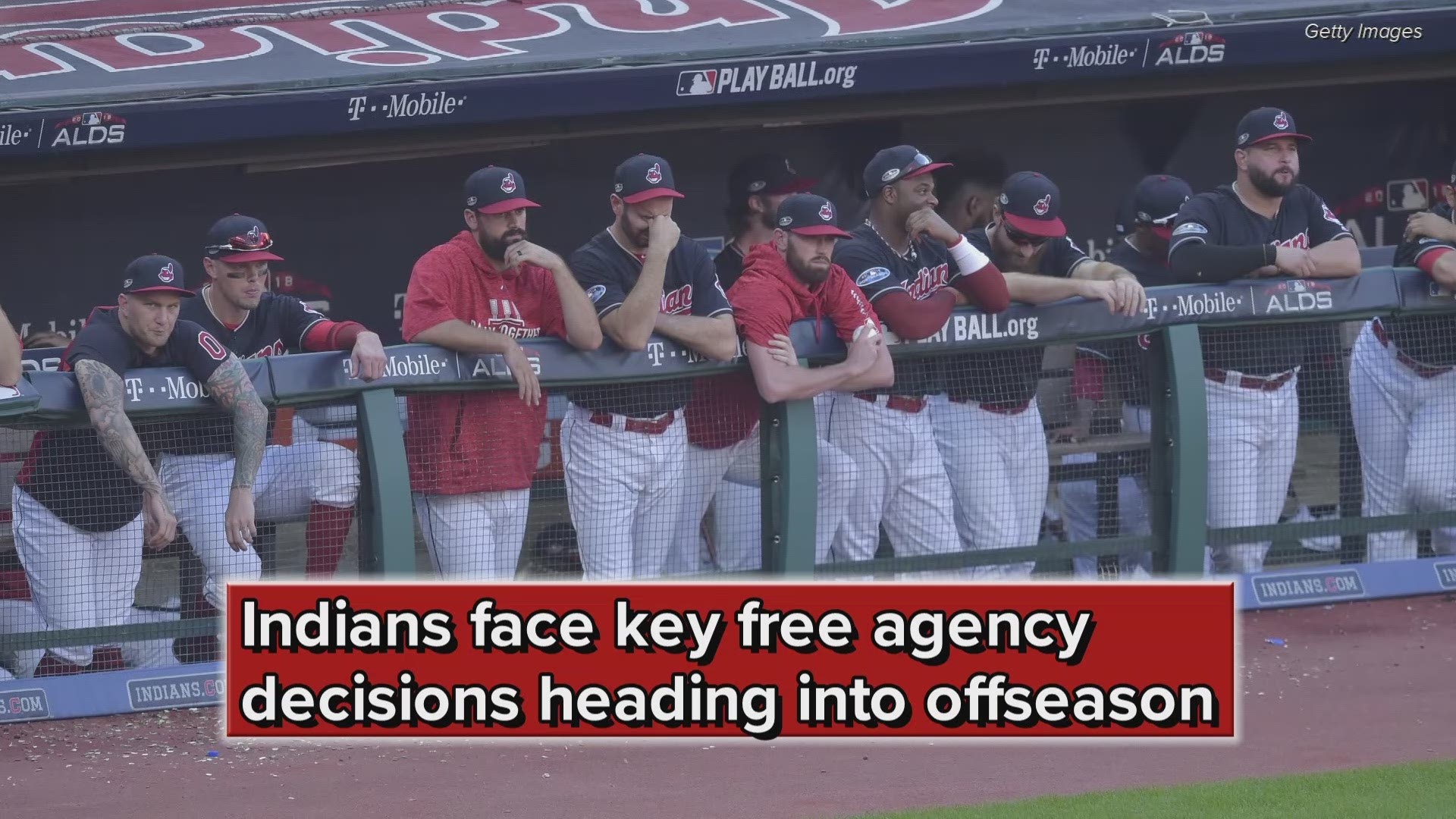 CLEVELAND -- Despite being swept by the Houston Astros in the American League Division Series, the Cleveland Indians' championship window remains very much open.

But before the Tribe returns in 2019 to take another crack at ending the longest running World Series championship drought in baseball, the Indians' roster figures to undergo some significant changes. In the coming offseason ahead, the Indians front office will face several key free agency decisions, with multiple multi-time All-Stars having potentially played their final games for Cleveland.

In addition to All-Star shortstop Francisco Lindor and starter Trevor Bauer each entering arbitration -- in Bauer's case, for the second straight offseason -- the following Indians players are currently poised to hit the free agent market this winter:

Acquired from the New York Yankees in the middle of the 2016 season, Andrew Miller played a key role in the Indians' run to the 2016 World Series and has been a key cog in the Indians' bullpen ever since.

But after earning All-Star honors for the second time in his career in 2017, injuries derailed the left-hander's 2018 campaign, limiting him to just 37 appearances, in which he accumulated a 4.24 ERA -- his highest since 2011. The 33-year-old's struggles continued into the postseason, where he made two appearances facing a total of five batters, allowing one hit and three walks.

Nevertheless, Miller's status as one of the most proven -- and versatile -- relievers in baseball figures to make him a hot commodity on the open market. But while most expect Miller has thrown his final pitches for Cleveland, the 2-time All-Star insists he's yet to have made any sort of decision regarding his future.

"I haven't even thought about that," Miller said after the Indians' season-ending Game 3 loss to the Houston Astros on Monday. "There's a little bit of a process that you have to go through. You don't really have anything happen until after the postseason's over. Unfortunately, there's a lot more postseason left and we're not a part of it."

Last offseason, the Indians seemed to take a gamble on Michael Brantley, picking up the one-year, $11.5 million option remaining on his contract. In the short term, the risk proved to be worth the reward for the Tribe, with Brantley providing an All-Star season. But not locking up its starting left fielder could prove costly for Cleveland, with Brantley now poised to cash in on a big free agent contract.

Preparing to hit the open market for the first time in his Major League career, the 31-year-old Brantley is entering a great offseason to cash-in on a big-time contract. In 2018, Brantley hit for a team-high .309 average to go along with 17 home runs and 76 runs batted in.

In an offseason where the likes of Bryce Harper and Manny Machado are set to hit the open market, Brantley won't get top-billing this offseason, but he'll likely be considered one of the top players in free agency's second tier. The Indians -- who Brantley spent the first 10 seasons of his career with -- would obviously prefer to keep their 3-time All-Star. But given the realistic financial constraints of a small-market team, doing just that will likely prove easier said than done.

The Cleveland Indians could be nearing a breakup with their all-time leader in saves -- and it might be best for all involved.

Although he was one of the most productive relievers in baseball from 2014-17, his struggles in 2018 were so apparent that he was essentially demoted from his closer role by the time the postseason had arrived. Tallying 27 saves -- his lowest total since 2014 -- Allen posted a career-worst 4.70 ERA while recording five official blown saves.

Although his down year could make him more affordable, it's hard to imagine Cleveland finding the cash to bring back a player it doesn't feel like it can't completely rely on.

When the Indians acquired Josh Donaldson from the Toronto Blue Jays in August, they likely knew they were only acquiring the 2015 AL MVP as a rental. Thus, it seems like a long shot that the Indians -- as currently constructed -- would make a legitimate run at retaining the 33-year-old, who is likely looking to cash in on one last long-term deal.

If the Indians could move some of the bigger deals on their books -- perhaps the $21.67 million Edwin Encarnacion is due next year -- perhaps keeping Donaldson would be more conceivable. But until then, it appears his Cleveland tenure will be limited to just 19 games.

Credit: Ed Zurga/Getty Images
Josh Donaldson #27 of the Cleveland Indians celebrates his grand slam as he rounds third and heads home in the seventh inning against the Kansas City Royals at Kauffman Stadium on September 28, 2018 in Kansas City, Missouri.

After being left off the Indians' postseason roster following a season in which he accumulated a 2-5 record and 6.14 ERA, Josh Tomlin's time in Cleveland -- if not Major League Baseball -- appears to be over.

After spending the first eight seasons of his career in Cleveland, Lonnie Chisenhall's time with the Indians could be coming to an end. This year, the 29-year-old didn't appear in Cleveland's lineup after July 1, with a nagging calf injury limiting his season to just 29 games.

Given his history with the team, the Indians could bring Chisenhall back on a cheap one-year, "prove it" deal. But even if they do that, one would imagine it would only be for a limited role.

Signing with the Indians on June 2, Perez made the most of his abbreviated time in Cleveland, posting a 1.39 ERA in 51 appearances with the Tribe. Given the possible -- if not, likely -- departures of Miller and Allen, the Indians may look to bring the 37-year-old left-hander back on a cheaper deal in hopes of maintaining some stability in their bullpen.

Given the realistic limitations of a small-market team, the Indians often find themselves relying on experienced veterans on cheaper deals to make a difference for them -- or at least, help fill out their roster.

In 2018, outfielders Melky Cabrera and Rajai Davis did just that, making the most of Spring Training invites. And while it wouldn't be a shock to see either back with the team next season, each would likely have to take a similar route to to make Cleveland's 2019 opening day roster.