'Standing on the shoulders of Giants' | Family reflects on race, riots and resilience 100 years after Tulsa Race Massacre

The Elliott family sat down with Lesli Foster to discuss their family's story and the implications of this tragic coverup in our nation's history. 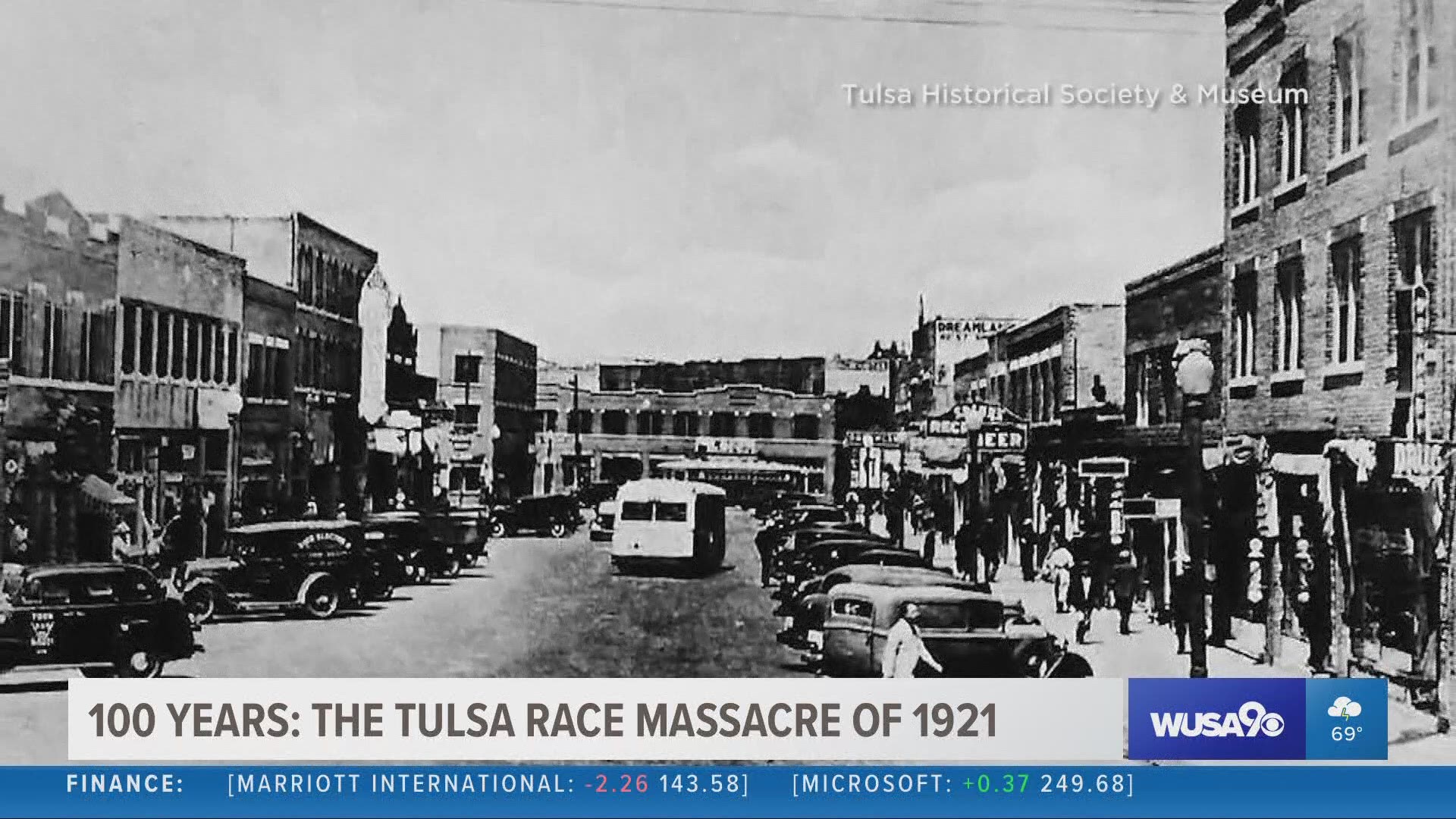 WASHINGTON — Back in 1921, “Black Wall Street” was a prosperous community in Tulsa, Oklahoma. Black people in the Greenwood District were well-to-do and confident about their self-made success.

All that changed when a white mob, fueled by a false accusation, set fire to their safe haven, killing hundreds who lived and worked there.

No one has ever been held accountable for the violence and destruction.

100 years later, we are still trying to awaken the truth about the massacre that went largely unknown by the masses. WUSA9 anchor Lesli Foster sat down recently with some descendants at "The Gathering Spot" in D.C. -- a private club for Black people to have these kinds of discussions -- to talk about their family’s story and the implications of a tragic coverup in our nation’s history.

But first, there’s someone you should meet.

Mr. TJ Elliott, once called this country’s “Merchant Prince, owned the largest African-American-owned department store in the United States at the time. The Elliott Family was part of the Oklahoma Land Rush back in the 1890’s – they saw it as a frontier for freedom. And, in time, they would build on what was once Indian Territory.

“They were able to acquire 300 acres of land, a hotel, a bank, a theater, a chain of department stores," Mary Elliott, descendant and family historian, said. "They owned office buildings. Their supply for the department stores came in from Europe, from Mexico, from all over the nation. Their clientele was Black, white and Native American.”

The 10,000-square-foot Elliott department store drew in people clamoring to see the marble floors and chandeliers, the finest goods money could buy and the celebrated fashion shows. It was a respite, of sorts, from the harsh realities of life.

“A space for Black people to imagine, during a time of racism and segregation, to be able to go in a store and go up to the counter and try on a hat -- something that’s seemingly mundane," Mary Elliott said. “But not only are you able to try on a hat, you’re trying on a hat in a business where it’s owned by Black people, run by Black people and it’s supporting the Black community.”

This community would come to be known as “Black Wall Street.”
But it was bigger than just commerce -- it was an entire apparatus of equity.

“They found ways to become educated, used their skills to build up their community, the dollar circulated within the community several times over, they supported one another," Mary Elliott said. "There was not this distinction between the haves and the have nots, what happened to the least, happened to all.”

Credit: Courtesy Mary Elliott
Photo of "Merchant Prince" TJ Elliott and his wife Willa Elliott sitting in the car outside their home in Muskogee, OK. It still stands today.

A 1910 photograph shows some of the Elliott family outside of their homestead in Muskogee, Oklahoma -- a Black community just outside of Tulsa. There is love in the image. Power. Agency. And, a certain assurance that comes from knowing who you are.

"They were unabashed about who they were as people and what they had," Dr. Tollie Elliott said.

His son, Tollie Jr, notes the pride and excellence captured in the photo.

Mary Elliott is the family historian and curator at the National Museum of African American History and Culture. Her brother, Tollie Elliott, is the Chief Medical Director for the Mary’s Center, and his son, Tollie Jr. Elliott is a student at Howard University.

A century ago, the Elliott’s were expecting to expand their chain of department stores and pass them down through the generations. That dream would have to wait.

On that day, a 19-year-old Black man and shoe shiner Dick Rowland stepped into an elevator on the other side of town. That's when Mary said Rowland encountered a young lady he had seen and talked to before.  Her name was Sarah.

“As he entered the elevator, he tripped," Mary Elliott said. "And when he tripped, he reached for her and she screamed."

Witnesses saw the whole thing. But, there was someone who worked in the store who claimed that Dick Rowland had attacked this young woman.

“Sarah ultimately said that he had not attacked her," Mary Elliott said. "But at this point, he was already taken off to the prison, to the courthouse.”

White mobs gathered to lynch Rowland. Black men, newly back from World War 1,  gathered to protect him. The groups clashed, and that set off a two-day frenzy.

“White residents essentially raze the Black community," Mary Elliott said. "They plow through 40 blocks of Black community, razing it. They loot the homes. They shoot the residents. They beat people to burn their homes down. They burned the churches. They destroyed the schools."

There were Black bodies in the streets. But that’s not all.

The white residents had planes. They dropped dynamite onto homes and businesses – pulverizing them. But before they demolished the homes, many in the mob took items that came to symbolize Black affluence and put them into their own homes. Black people who ended up having to work for some of these very families, would see their own belongings in the homes of their new employers, as yet another infusion of trauma to come.

The people who escaped were rounded up and put into internment camps. Among the thousands taken from their homes and livelihoods was Cernoria "Nora" McGowan Johnson.

“She was a young child during the massacre and her family was subjected to all that violence," Mary Elliott said. "They were forced into an internment camp and it was a white woman who her mother worked for, who came out and got them out of the camp.”

Johnson went on to lead the Washington bureau of the National Urban League and worked with Big 6 leaders and President Lyndon Johnson to get civil rights laws passed. But "Aunt Nora" never talked about the trauma of Tulsa, and the history books left this entire chapter to be forgotten -- an effort by the local, state and federal government to conceal the truth.

One hundred years after the deadliest race riot in this country’s history most people still have no idea it even happened. How is that possible? The Elliott’s have some thoughts.

Tollie Elliott Jr. grew up hearing about these tumultuous times and the strength it took to keep going.

“I believe it has everything to do with school systems today," he said. "History is written by the victors. They don’t want to look bad, especially now.”

And it was just part of a growing narrative about Black people in this country. One that has gone unchecked for generations, by design.

“It’s ripped out from under them and then you have someone say, see, they’re lazy, they don’t appreciate education, they don’t want a business,” Mary Elliott said. “And they don’t tell the history about, in fact, there was a time that they did all these things and now they’re forced to rebuild.”

As head of the National Negro Business League, TJ Elliott was at the center of the effort to restore homes and livelihoods. Tollie Elliott keeps an image of his inspirational namesake from a promotional calendar in his home. It’s the one item the family has from their department store that was burned during the violence. It’s a reminder to keep going.

“It’s telling you, you can’t fail," Tollie Elliott Jr. said. "Your family hasn’t failed, so why would you? Keep moving. It’s just like fuel.”

The “Tollie” who graduated from high school four years after the Tulsa Race Massacre – likely shared that same sentiment. The family still has his framed diploma from 1925.

So where do we go from here as a nation?

Tollie Elliott believes we have to start by speaking the truth.

“I like the perspective of calling people out," he said. "I think it’s okay. I think it forces people to acknowledge the horrors of who they were, but it doesn’t mean who they have to be.”

Mary Elliott says we have work to do, but it requires all of us to move our nation forward.

One hundred years later, Tulsa descendants are left to wrestle with what justice might look like for the loss of loved ones, property and community. They were never made whole again. And, they never got the insurance money they paid for.

These Elliott’s intend to make sure this story continues to be told – and they are committed to continuing the work of their ancestors and the conversation around who we are as a nation and the obligations we have to each other.

Their story has a place of prominence at the National Museum of African American History and Culture. You can read more about their family and others through the digital link on Tulsa on the museum’s website.