The document says Greg and Travis McMichael were denied bond due, in part, to "significant danger" they pose to persons, community or property.

JACKSONVILLE, Fla — First Coast News has obtained new court documents that provide further insight into a judge's reasoning for denying bond for two of three men charged with murder in the death of Ahmaud Arbery.

Greg McMichael and Travis McMichael are accused of following and shooting Arbery in Brunswick back in February. In November, a judge denied bond for both of them over concerns about the McMichaels’ actions and testimony from other witnesses.

These new documents reveal that the court found both defendants to be a "significant danger to persons, community or property" based on evidence that they armed themselves to pursue an individual on the assumption that he had committed a crime.

"Based on the video admitted into evidence there appears there was little or no attempt by the Defendants to have a conversation with Arbery, nor was there an attempt to call police so that the police could question Arbery," reads the court order. "In sum, the video evidence showed the lengths the Defendants would take to track down and pursue another person."

The court also found that the pair posed a significant risk of influencing witnesses and obstructing justice, especially given the Department of Justice investigation into the case for a possible hate crime.

The document lists several instances in where the court believes Greg McMichael tried to influence the investigation including contacting the Glynn County District Attorney, his long-time employer, from the crime scene and speaking with co-defendant William Bryan.

Additionally, the court document reveals that Greg McMichael contacted Leigh McMichael while in custody, asking her to have his daughter to delete posts from social media that were of potential value to the investigation.

The court document suggests that Greg McMichael stated "get rid of it", "make it disappear" and "make it go away" when speaking with Leigh McMichael about the post.

The court order says that the two also have a high-flight risk considering the nature of their charges and potential sentencing of life without parole.

Read the full court order below: 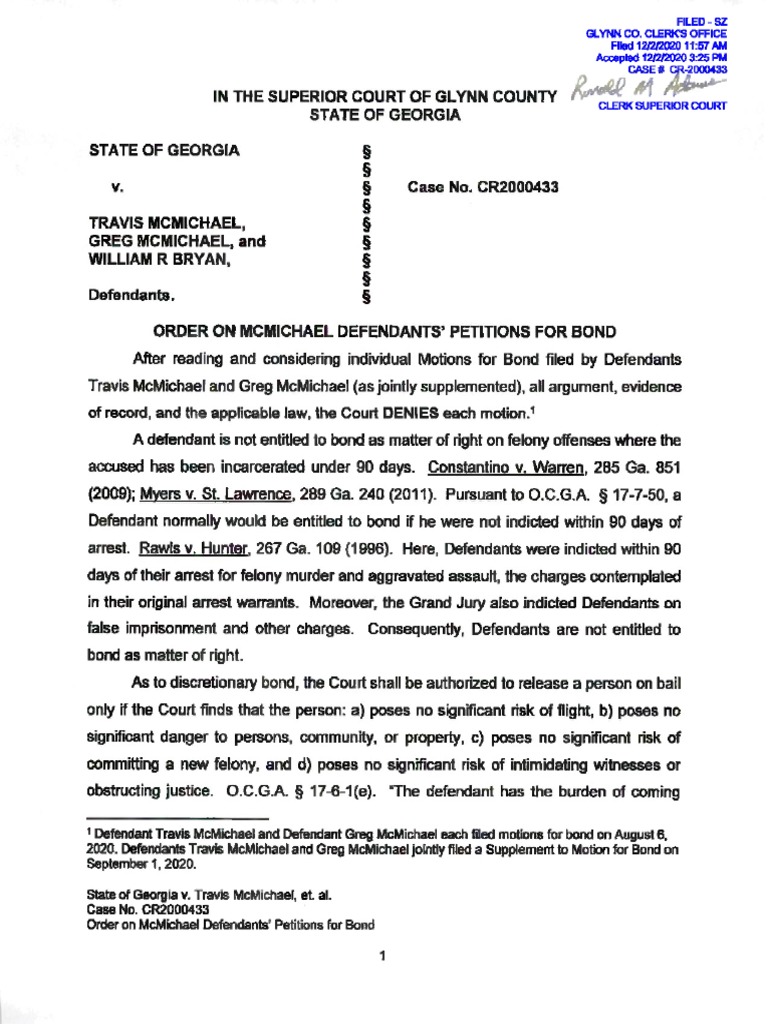