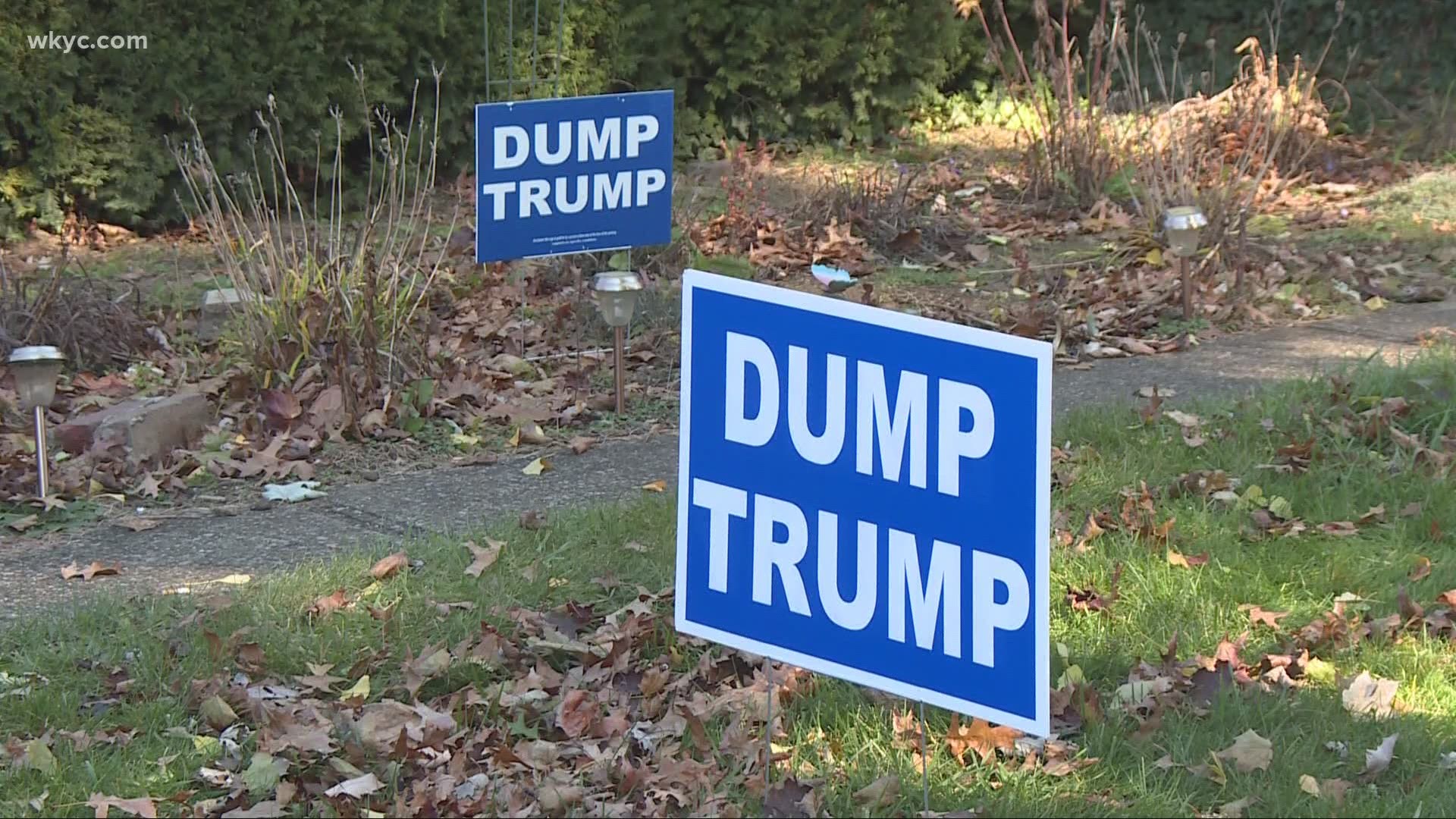 GREEN, Ohio — A family in Green found itself without power today after someone vandalized their home’s electric meter.

Two days earlier, in the early morning hours after Election Day, the family was jolted from their sleep by a shotgun blast aimed at a “Dump Trump” sign displayed in the front window.

“I don’t know if I'm going to wake up in morning and see damage to one of my vehicles or worse,” homeowner Chris Watson told 3News. “I’m worried he’s going to come back and break into the house.”

Watson and his wife, Terrie, have lived in the house for more than 15 years and have a six-year-old daughter.

“My daughter and I have actually been sleeping on the bedroom floor in case he comes back to shoot again,” she said.

Watson said he started getting harassed in March, when he first displayed several “Dump-Trump” signs in and around his house. He replaced them and even planted one in a bag of cement buried in the yard.

Their signs first attracted a mild response, including sign stealing and pro-Donald Trump literature stuffed in their mailbox. But other things became impossible to ignore.

“We have been attacked for it,” Watson said. “Nails in the driveway. Valve cores missing out of tires, burglary, spray painting in the garage. I’ve gone to bed the last couple of nights worried about the safety of my family."

The couple suspects a neighbor is behind the harassment. The Watsons said the neighbor has mocked them before and has acted strangely, leaving them feeling this is more than just a difference of politics. But they have no proof yet.

Summit County sheriff deputies have responded numerous times. But Watson said he doesn’t believe they were taking the complaints seriously until recently.

“Lots and lots of complaints,” he said. “But all they do is come out and took a report and wrote the report number on the back of business card. And took off. We never heard back. I feel like we are collecting business cards.”

After the gunshot blast, deputies collected evidence from the around the house, including materials from the shotgun blast. Deputies returned today, after the Watsons discovered someone had ripped the electric meter off the side of their house.

The sheriff’s department told 3News deputies are it is taking all the complaints seriously but has not identified any suspects. Anyone with information is asked to call the Summit County Sheriff’s Office Detective Bureau at 330-643-8637.

The Watsons are taking some comfort in support from other neighbors, one of whom left them a note today.

“Your signs gave us solace in a sea of Trump flags that we had to see dropping off our daughter from school every day,” the letter said. “We wanted to put our Biden Harris signs out but out of fear of retribution, we decided against it.”

“This shouldn’t happen,” Terrie Watson told 3News. “We should be allowed to express our opinions.”