Brian Anthony offered an apology for his actions before the judge handed down sentencing. 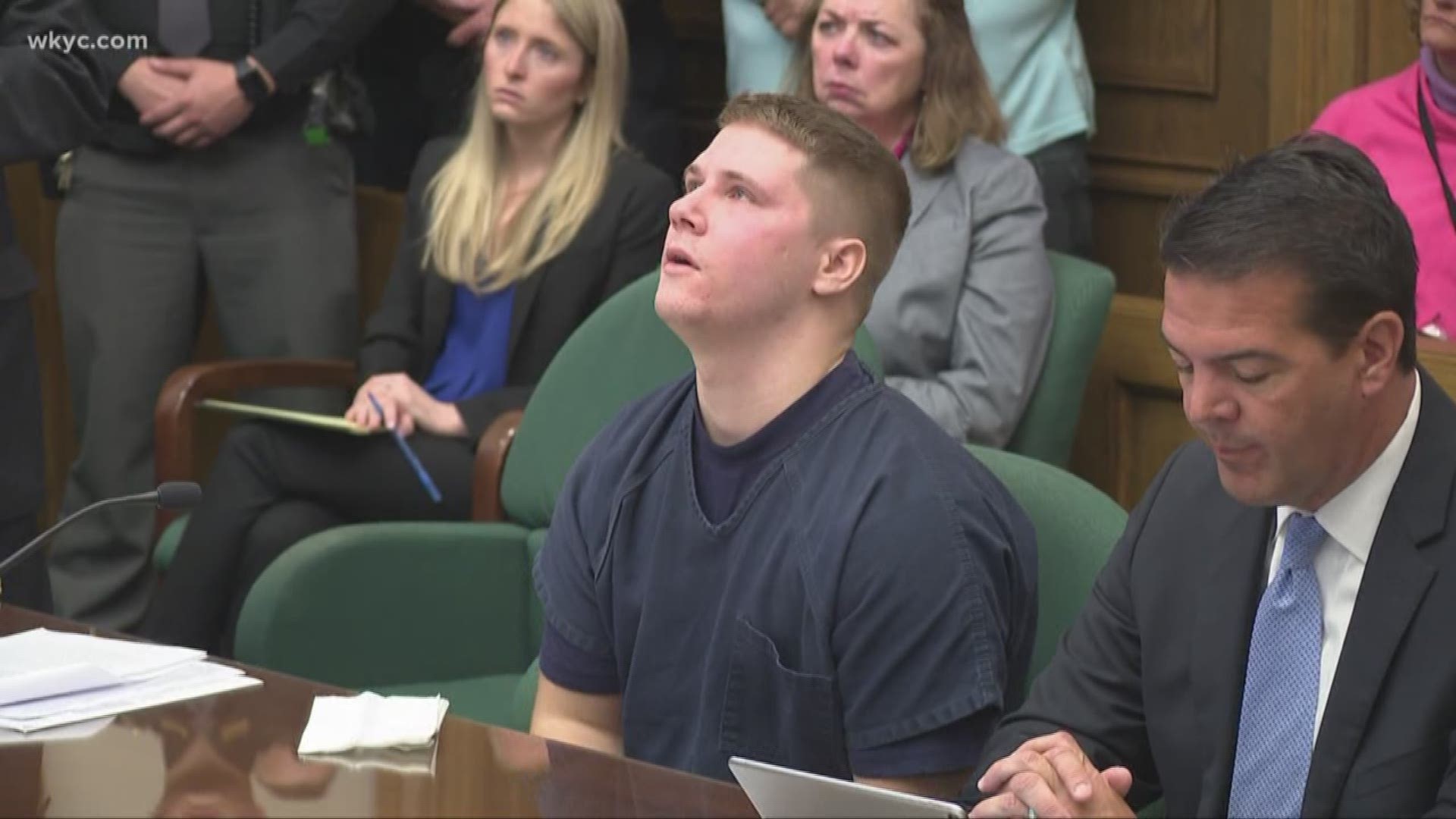 PAINESVILLE, Ohio — Brian Anthony will spend the next 11-and-a-half years behind bars.

He learned his fate Friday when the maximum punishment was handed down a few weeks after pleading guilty to all charges in the hit-and-run death of Mentor police officer Mathew Mazany.

His sentence, which will be served consecutively, was broken down as follows:

- Failing to stop after the incident: Three years in prison.

The crime dates back to June 24, 2018, when Anthony was behind the wheel of a vehicle that struck and killed officer Mazany as he was assisting with an unrelated traffic stop on Route 2.

Prosecutors said that blood and urine samples showed Anthony had heroin and ethanol in his system, along with morphine, codeine and fentanyl.

Before the judge handed down his decision, Anthony offered the following statement: 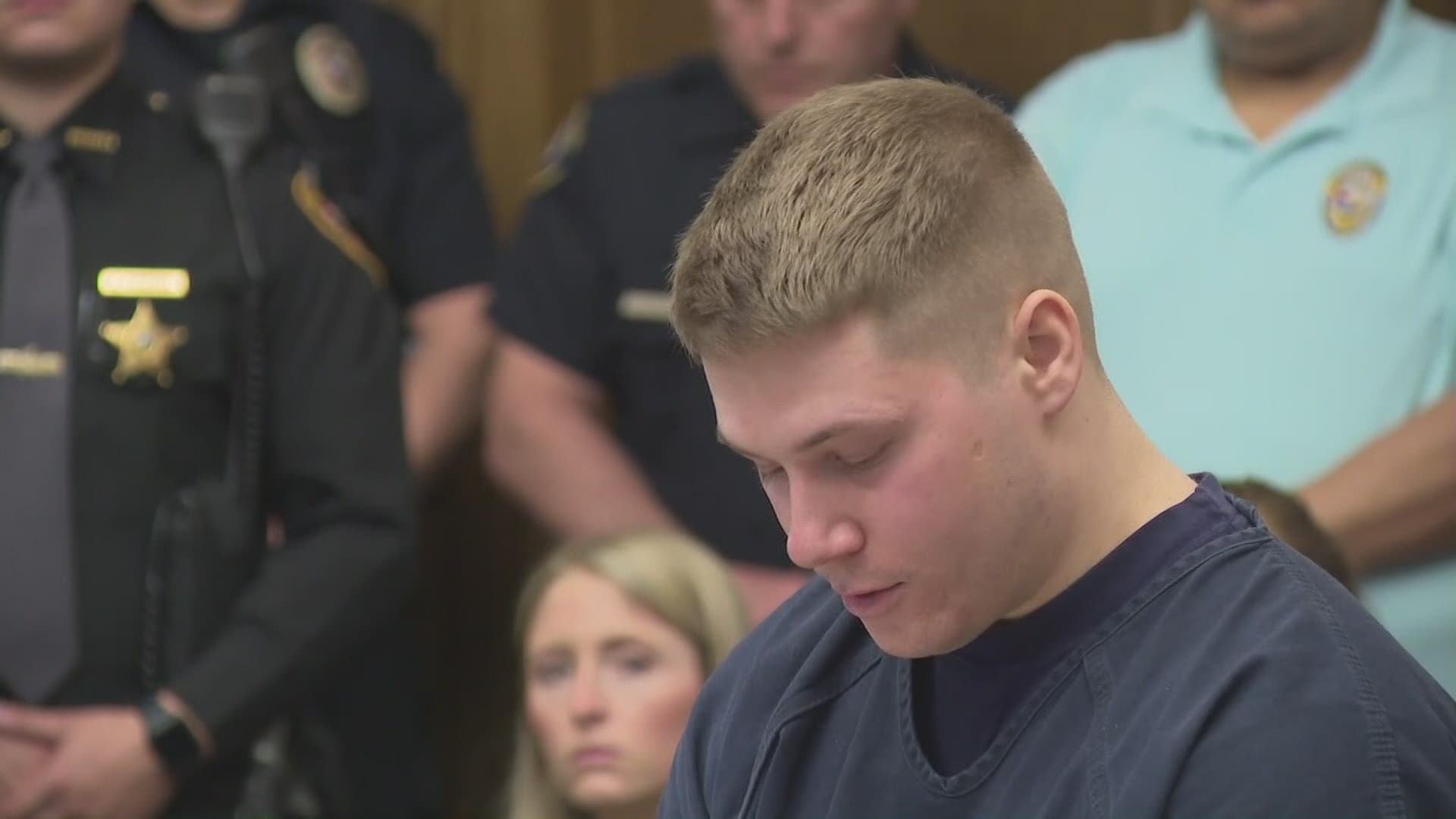 “I just want to apologize to officer Mazany’s family, and to all the police officers in Mentor and to my family. To everybody this has affected, I know there is nothing I can do to right this tragedy that was caused by my decision to drive impaired. The only thing that I can do is accept full responsibility for my actions. As you are aware, I entered a plea of guilty to all charges in order to accept complete responsibility. Also, I did not want to put the Mazany family and Mentor Police Department through any more grief. As you know, many members of my family are in law enforcement and firefighters, and I’ve always been taught to admit my wrongs and accept my punishment. I made a horrible series of decisions that evening. My use of alcohol and drugs have ruined the lives of others as well as mine. I know I need to change my behavior. I promise to do so during my period of incarceration and afterward. There’s not a day that goes by that I don’t pray for the Mazany family, Mr. Mazany’s son, his fellow officers and his friends. I realize that my horrible decisions that evening have caused everlasting heartache to the Mazany family, his friends and my own family. Once again, please know truly sorry and devastated I am that I am the one who caused this tragedy.”

Multiple people also spoke on Anthony's behalf prior to sentencing -- including his mother.

“I want to first express my deepest sympathy to the Mazay family, all of the first responders in this room and in our community and to all who have been impacted by the significant loss of officer Mazany. … I cannot begin to imagine how deep your pain and loss is, and I have been praying every day since that horrific accident for each of you, and I promise I will continue to do so."

She continued with tearful comments about her son.

“Anyone who knows Brian, knows him to be a man filled with integrity, compassion and love. The outpouring of love and support that has filled our lives since the tragic event has been overwhelming." 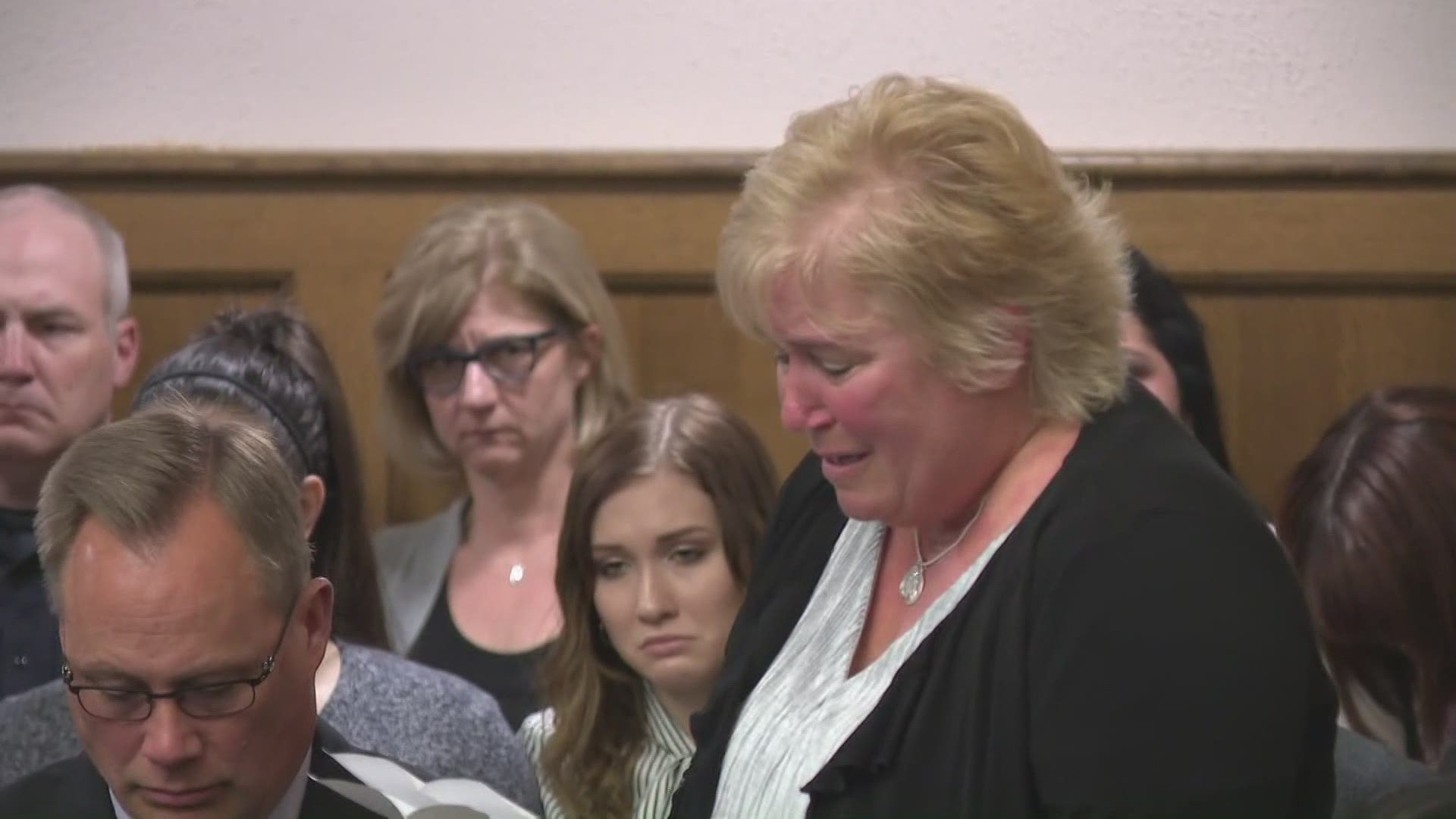 “Brian impacted my life most profoundly when he came to us at the age of 19 and asked for help. He had just finished his freshman year in college, and he came to us and humbly admitted he had a drinking problem. He knew he needed to make significant changes in his life so that he could be a person for others. He, on his own, made the decision to cut all ties with friends as he knew he was wired in a way that he could not be around the common college scene of drinking and partying. He left a sport he loved and he made the choice to seek support. The following five years changed his life. He put himself in treatment, he faithfully lived the steps in AA and he became a support to many others who struggle with addiction. He was a leader, a volunteer and he gave witness to his struggles an his deep, deep desire to be sober. He, on his own, took control of his life and turned things around. Brian always owned his mistakes. He always worked to make mends. He always cared and worried about the impact his life had on others. Brian humbly shared his challenges with his younger sisters as he’s been an incredible role model in faith, grit and courage."

Emotions filled the courtroom as she discussed the night in which officer Mazany was killed.

"As you know, my husband, Michael, was the paramedic who tried to save officer Mazany’s life that night. I believe he, too, was Brian’s first responder through 22 years of being a firefighter’s wife, so many times his pager would go off during a birthday or a significant event, and I would respond, ‘Do you have to go?’ Every time, Mike would answer, ‘If it was for someone in our family, wouldn’t you want me to be there?’ On that tragic night, God chose Mike to respond to his family and me -- his family of fellow officers, and his son.”

“The actions of my one and only son, who I love with all my heart, have resulted in the loss of life," he said. "This, I will struggle with for the rest of my life.”

Officer Mazany's brother took the opportunity to speak, and expressed his anger toward Anthony before sentencing was handed down.

“I would like to apologize to every officer that had to sit here and hear this from these people this morning. As a policeman’s son, I made my peace with my father not coming home when I was 5 years old. The year was 1975. My daddy was on SWAT. I am also an alcoholic with 15 years of consecutive sobriety. Had you pulled over, sir, had you picked up that phone that you so desperately hid from justice! And you, sir (referencing Anthony’s attorney), do you have your own ambulance?! How dare you! How dare you stand in here and wave the flag of law enforcement, when you fought so hard to keep this little bastard out of jail!” 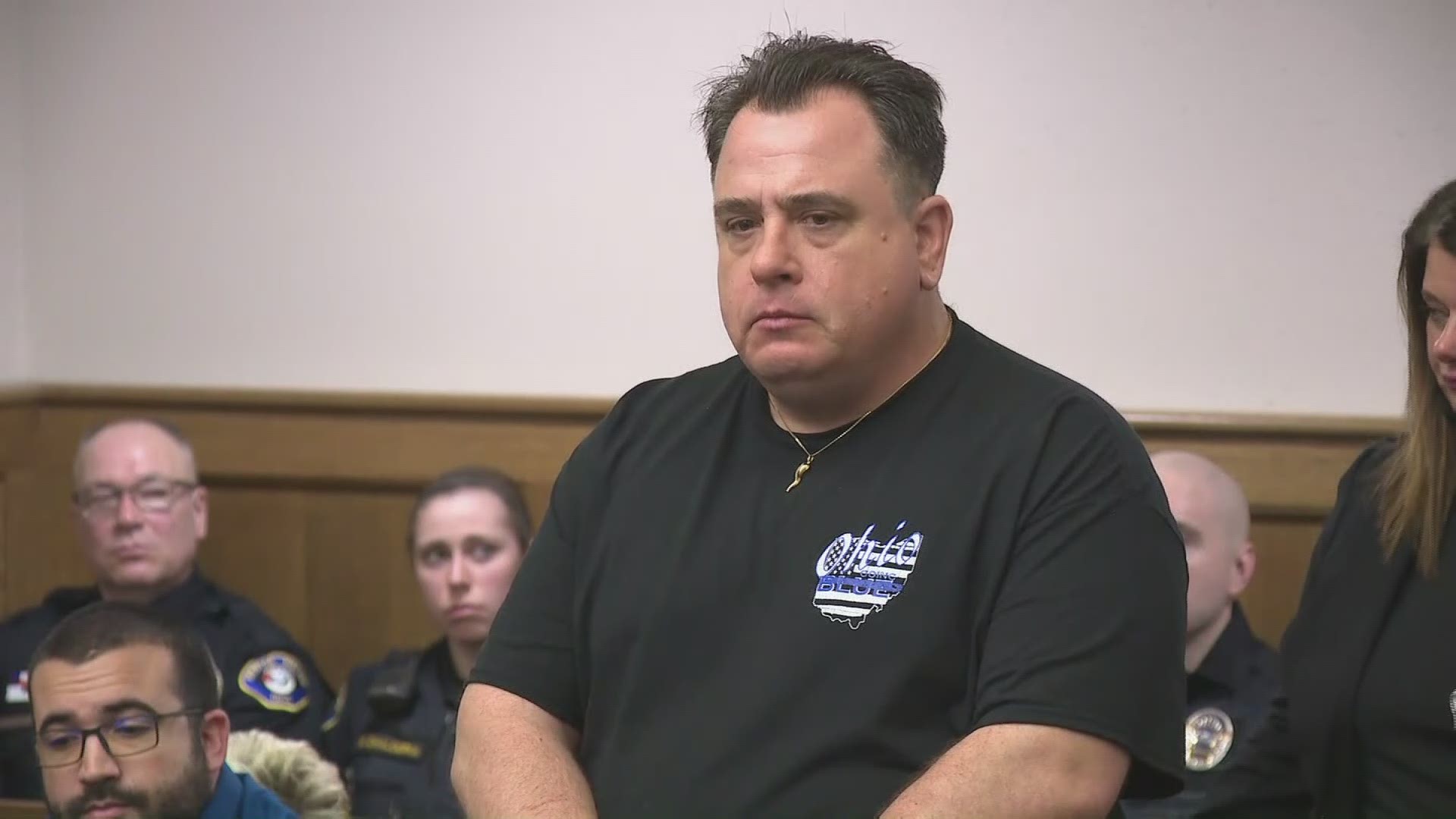 The judge ordered him to lower his voice.

“I apologize, your Honor. I don’t mean to disrespect this court in my brother’s memory or law enforcement in general. I apologize, but ever since this young man’s first hearing I have watched his smug face. I have watched this family. I have watched it all, and I have said, ‘Where is the remorse? Where is it?' ... You ground him down and flung him through the air. You didn’t know? You’re a liar. It is insulting for me to hear that we’re praying for both families. My family didn’t do anything. My family hasn’t fought to deny justice."

Mazany's brother then demanded the judge punish Anthony with the toughest possible punishment.

“You, sir, have showed no integrity, no remorse. Had you pulled over, had you said, ‘Hey, I just think I just did something terrible,’ the alcoholic in me would have compassion for you. … But I have no compassion for you. I have no sympathy for you, and I will be there every time you try to get an extra piece of toast or whatever break you’re looking for in the months to come. How dare you. … I demand the maximum sentence, your Honor. My brother was a good man. He helped many people. He held society first and foremost in his thoughts as he made arrests, as he wrote tickets. As he did all of his actions as a police officer he would ask himself, ‘Do my actions help or hurt society?’ An example needs to be set to these young people that choose to do this. I’m just aghast standing here and listening to this. No remorse.”

“To you, Brian, I forgive you for I can not hold hate in my heart because I know it would tear me apart inside and make me something I’m not. … We all make mistakes. We’re all human. You made a mistake, and you admitted it. That much, I think, as I know very many people in life who’ve never admitted a fault.”

Mazany’s wife offered the final statements on behalf of the Mazany family.

“I’ve heard a lot of things here about forgiveness, responsibility and second chances," she said. "Matt’s not going to get a second chance. My son doesn’t get his father back. I don’t get my husband back. Brian still has his life. You still have your son. I don’t have that. My son doesn’t have that anymore. He (Brian) does have a second chance. We don’t. In regards to responsibility, I did want to say a few things about the life of Matt. We’d been together for a long time, over 22 years. Matt was my best friend. He was my soul mate. He was my husband for 22 years, that’s almost as old as you are today (referencing Anthony). A piece of me is gone forever. I’ll never be the same. My son’s life will never be the same. I thought a long time about what I wanted to say. You already know that every life that has been touched by this tragedy has been destroyed. Instead, I’ll tell you a little about the man that he was. He was a good man with a heart of gold. He was a responsible, loving man that overcame obstacles in life and gave to others.”

She continued by talking about the loss she now feels.

“Matt had incredible strength of character. He was fierce and determined in everything that he did. He was my protector, my son’s protector. With Matt by my side I always felt safe. He was my heart and my soul. He inspired me in ways that I wish I could tell him now. Whenever I’m in a tough spot, I find myself asking what he would do in this situation. I still lean on his strength and his love. He was my everything. He was my hero. Not because he wore a badge, but because he was and is the epitome of what a good man is. You didn’t kill a police officer. You took the life of a very special man.”

You can see more emotional moments from Friday's sentencing below: 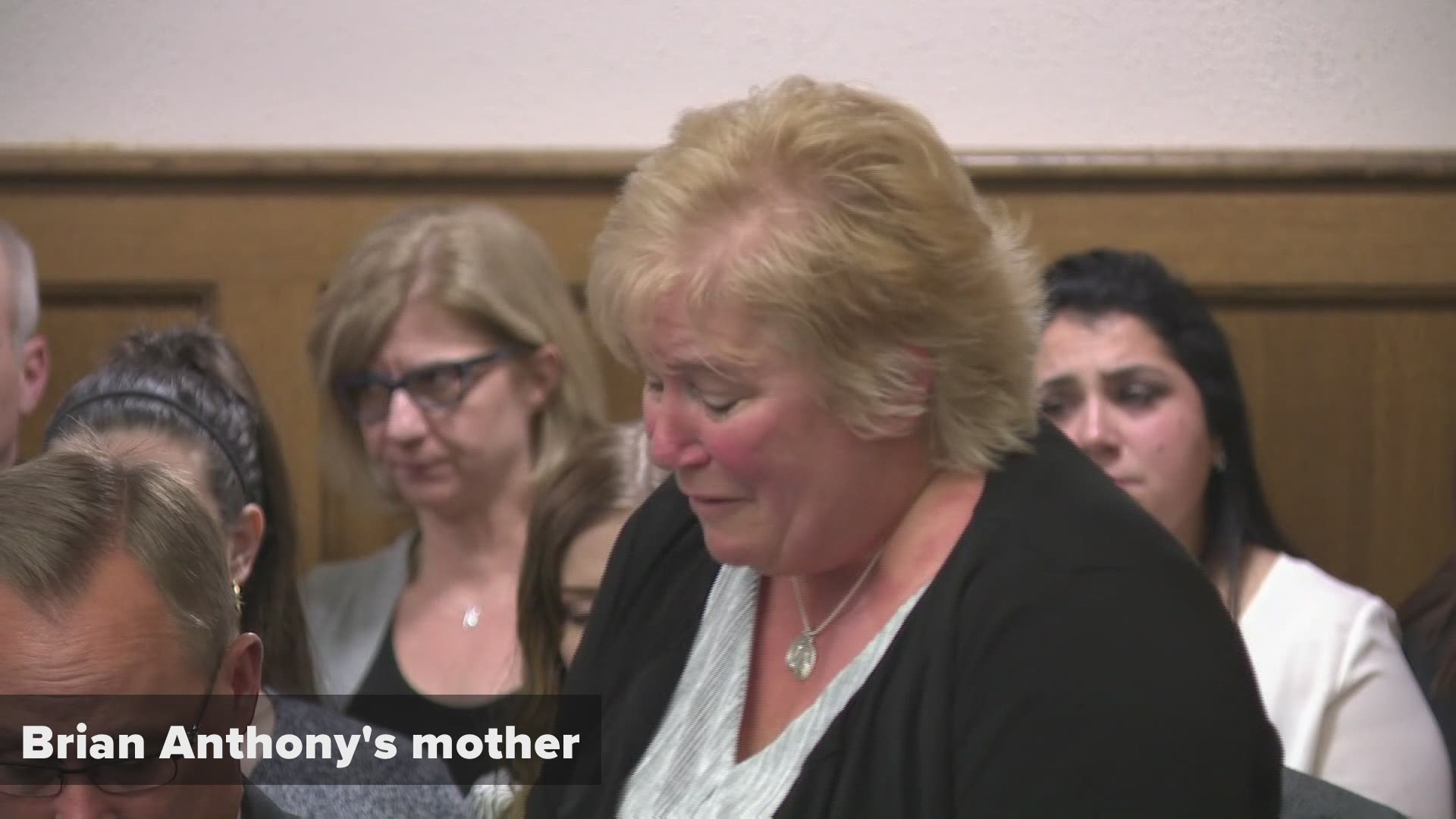