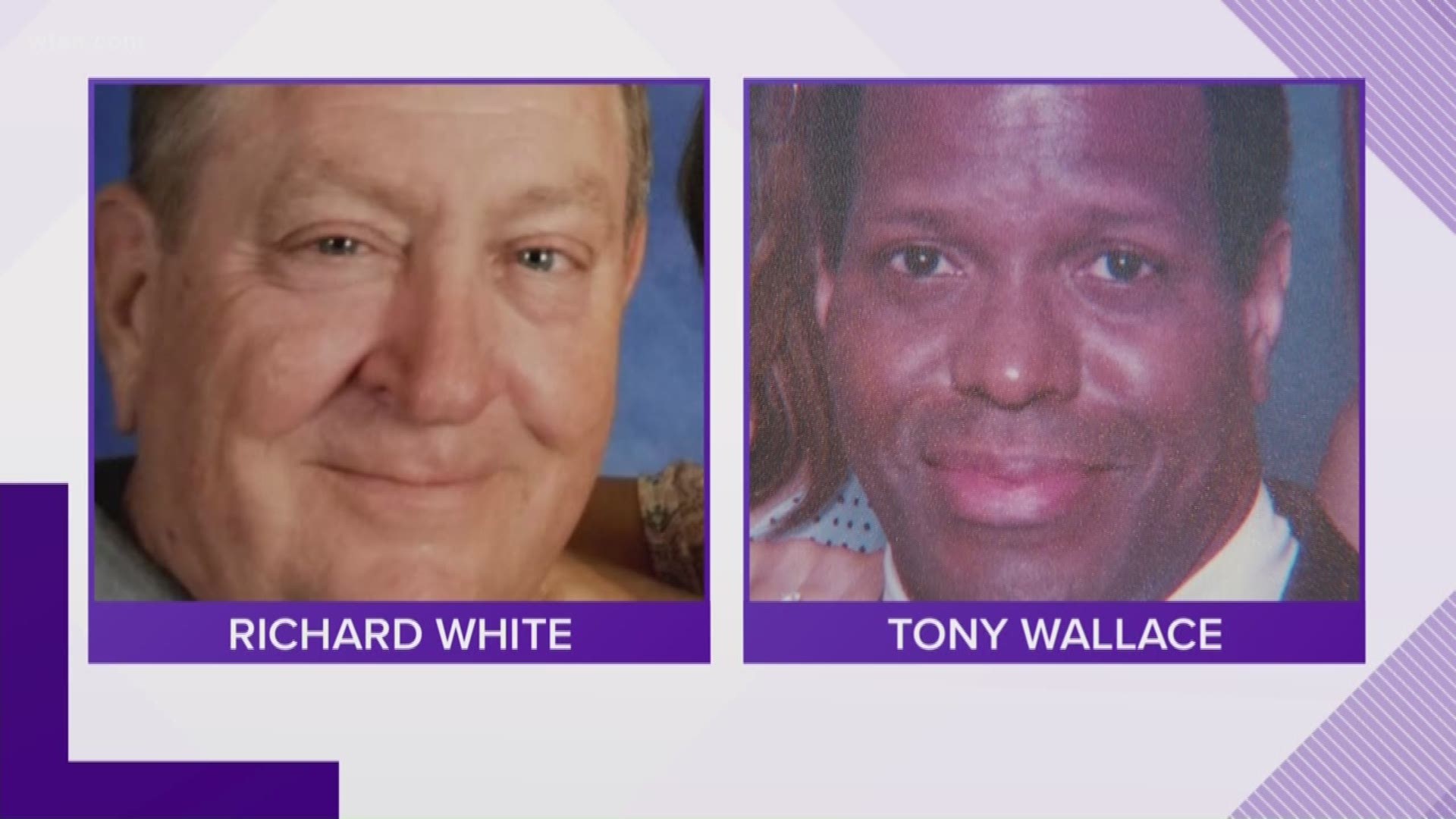 Authorities have identified the gunman and two people killed during a shooting Sunday morning at a White Settlement church.

Two congregants — 67-year-old Richard White of River Oaks and 64-year-old Tony Wallace of Fort Worth — were shot and killed by 43-year-old Keith Thomas Kinnunen, according to Texas Department of Public Safety officials.

Kinnunen was shot and killed by Jack Wilson, who was an armed church member acting as security.

Wilson said he and others were watching Kinnunen when he entered the church because he was wearing a wig and a fake beard.

The service at West Freeway Church of Christ was being live-streamed online, showing the moments before, during and after the shooting. The church's video was later removed.

Kinnunen is seen standing up and appears to say something to one of the men before he pulls a shotgun from his coat. Wilson said White was pulling out his gun when Kinnunen shot him.

The shooter then turned the gun on Wallace, Wilson said.

Wilson said he couldn't shoot back right away because people were starting to stand up.

"About a second later had a clear shot, then I took the shot," Wilson said.

One of those killed was a registered nurse.

Wallace joined the church in 2007. He was a deacon and a nurse who worked at Texas Health Resources, his family said.

He was known for going to homes and leading prayer when people were ill.

His grandchildren and another daughter were with him Sunday at church. His daughter climbed over pews to get to him after the shooting.

Wallace was trying to tell his family how to treat him. He had put his arm up to protect himself. His family said the shot struck his lungs.

The family said the church was welcoming to everyone.

Wallace's 12-year-old grandson, Chris, said he saw the shooter walk into the church. He recalled his aunt telling his cousin not to make fun of his appearance.

"I knew he wasn't a real person because when he came in at first he was like, he looked homeless and he looked like he was planning something," Chris said "And he had a big coat on, like a fake beard, everything

The Wallace family is still grappling with their loss but is welcoming people to come over.

"We just opened our house. We told everybody, 'If you want to come, it's totally fine,'" Sarah said. "He would want our door open, so we keep our door open."

'Stood up against evil'

White was among the armed congregants at the church who was watching Kinnunen before the shooting.

His family wrote on Facebook that his life was taken in a "senseless act of violence."

"You stood up against evil and sacrificed your life," wrote his daughter-in-law Misty York White. "Many lives were saved because of your actions."

Misty York White wrote that the family has always seen White as a hero but now everyone knows.

In an official statement released by the family on Facebook, White was described as "an Eagle Scout, lover of adventure, and all things outdoors." The family also identified him as devoted member of the church and an active volunteer on the security team.

"Rich constantly put others first and was always willing to help with a smile on his face," the Facebook post read.

White had read scripture before communion. The shooting occurred during communion.

He was arrested in Oklahoma in 2011 on a domestic violence charge and again in 2012 on a charge of arson, according to officials in Grady County.

The FBI was seen visiting residential and commercial locations Monday in Fort Worth, White Settlement and River Oaks to better understand what motivated Kinnunen to open fire on the West Freeway Church of Christ congregation.

While his motive remains unclear, WFAA is learning more about Kinnunen's troubled past.

"The shooter has had multiple contacts with law enforcement in the past but he was not on any sort of watch list," said Matthew DeSarno with the FBI in Dallas.

The 43-year-old has roots in River Oaks but DeSarno described him as "relatively transient."

He was arrested in Oklahoma in 2011 on a domestic violence charge and again in 2012 on a charge of arson, according to officials in Grady County.

In 2013, his ex-wife filed a protective order against him.

Also in 2013, an Oklahoma court found Kinnunen mentally incompetent to stand trial and ordered an evaluation by the Oklahoma Department of Mental Health and Substance Abuse Services.

According to records from the Pima County Sheriff's Department and the Tucson Police Department, Kinnunen was arrested in 2010 for theft and in 2011 for disorderly conduct.

In Tarrant County, Kinnunen's arrest record includes a 2009 charge of aggravated assault and a 2013 charge for theft of property between $50 and $500.

He was also arrested in 2016 in New Jersey on a charge of unlawful possession of a weapon, according to authorities in Linden, N.J.

News reports showed Kinnunen was found near a refinery with a shotgun.

He told police he was homeless and likes to take pictures of "interesting sites," reported My Central Jersey.