Minutes after the total eclipse ended, drivers hit the road to try and beat the traffic home. 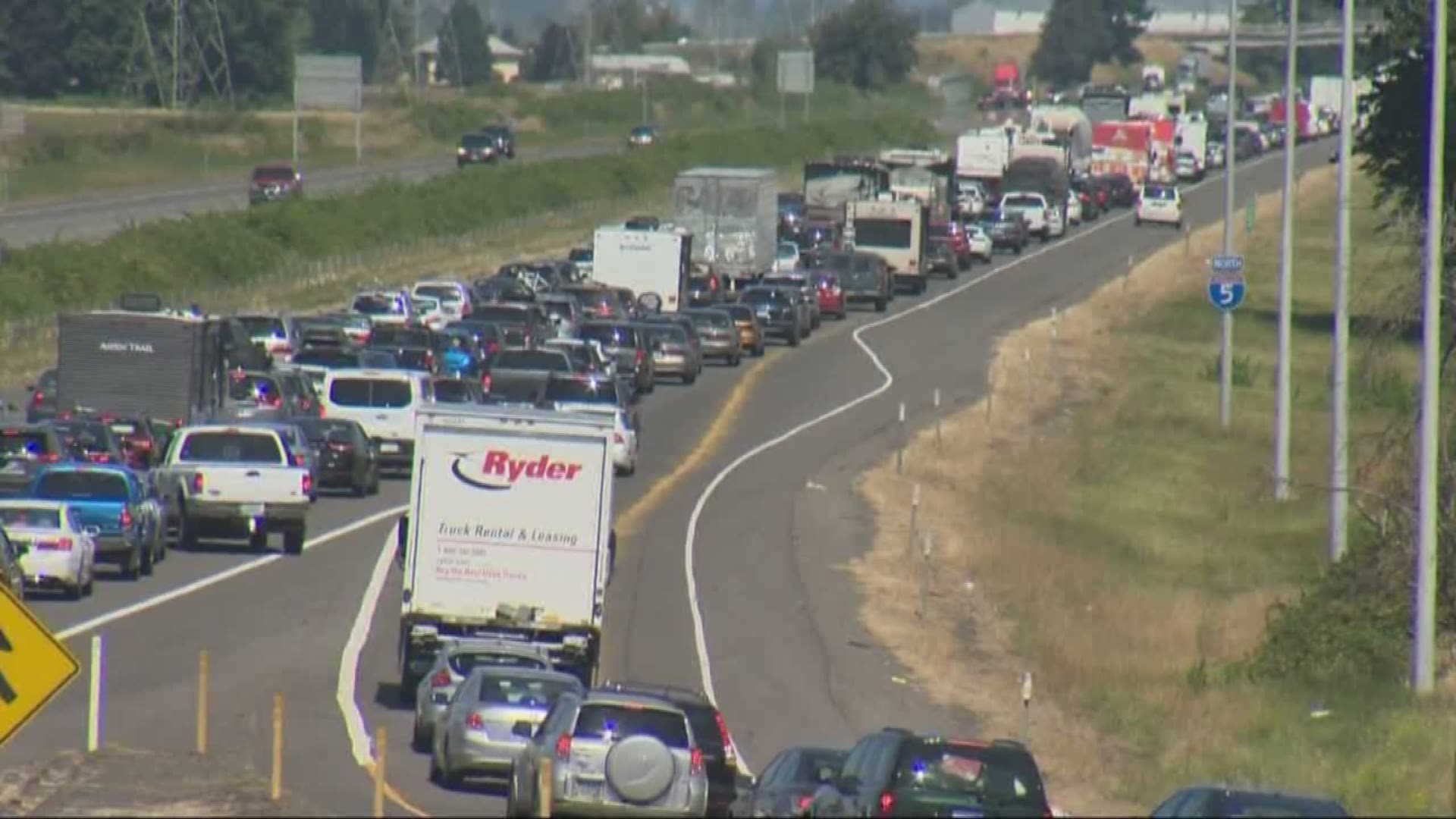 With an estimated 1 million people coming to Oregon for Monday's total solar eclipse, the Oregon Department of Transportation has said the result could be the "biggest traffic event in Oregon history."

While it may not have lived up to the pre-eclipse hype, freeway traffic was slow for many drivers heading south to the path of totality.

Minutes after the total eclipse ended, drivers hit the road to try and beat the traffic home, which caused major traffic jams in the Willamette Valley and Central Oregon.

Traffic on Interstate 5 was extremely slow immediately following totality in Salem. KGW viewers reported five-hour drives from Salem back to Portland, a typical one-hour trip. By evening rush hour time, it was two-hour drive from Salem to the Marquam Bridge in Portland

I5 @ Jefferson Exit Marion County. Please be patient and have a safe trip home. pic.twitter.com/wDjikkm2CM

In addition to northbound traffic, southbound traffic from Salem was also bumper-to-bumper with reports of that trip being three hours.

The worst congestion was likely in Madras, a hot spot to view the eclipse in totality. The town of 6,000 people was expecting 100,000 for the spectacular event.

TripCheck showed bumper-to-bumper traffic on U.S. 97 south of Madras and north of Redmond. Here's the live image from US 97 at US 26.

Those on the highway weren't the only ones in line waiting to get out of Madras. Dozens of planes were lined up at the airport waiting to take off.

It's not just cars backed up in Madras. There's long line of planes waiting to get out of the airport https://t.co/0nWHG9GBar pic.twitter.com/tBLBzIcsBm

KGW's Kyle Iboshi was just a mile away from the airport Monday afternoon and Google estimated his travel time to be 56 minutes for that one mile.

Prior to the eclipse, traffic was only problematic in the Prineville area days before the eclipse due to the Symbiosis eclipse festival.

The festival began Thursday and was expected to draw 30,000 people. Attendees clogged the highway from east of Prineville to the event in the Ochoco National Forest. On Wednesday and Thursday, traffic was backed up for 30 miles. But by mid-day Saturday, traffic was flowing freely. 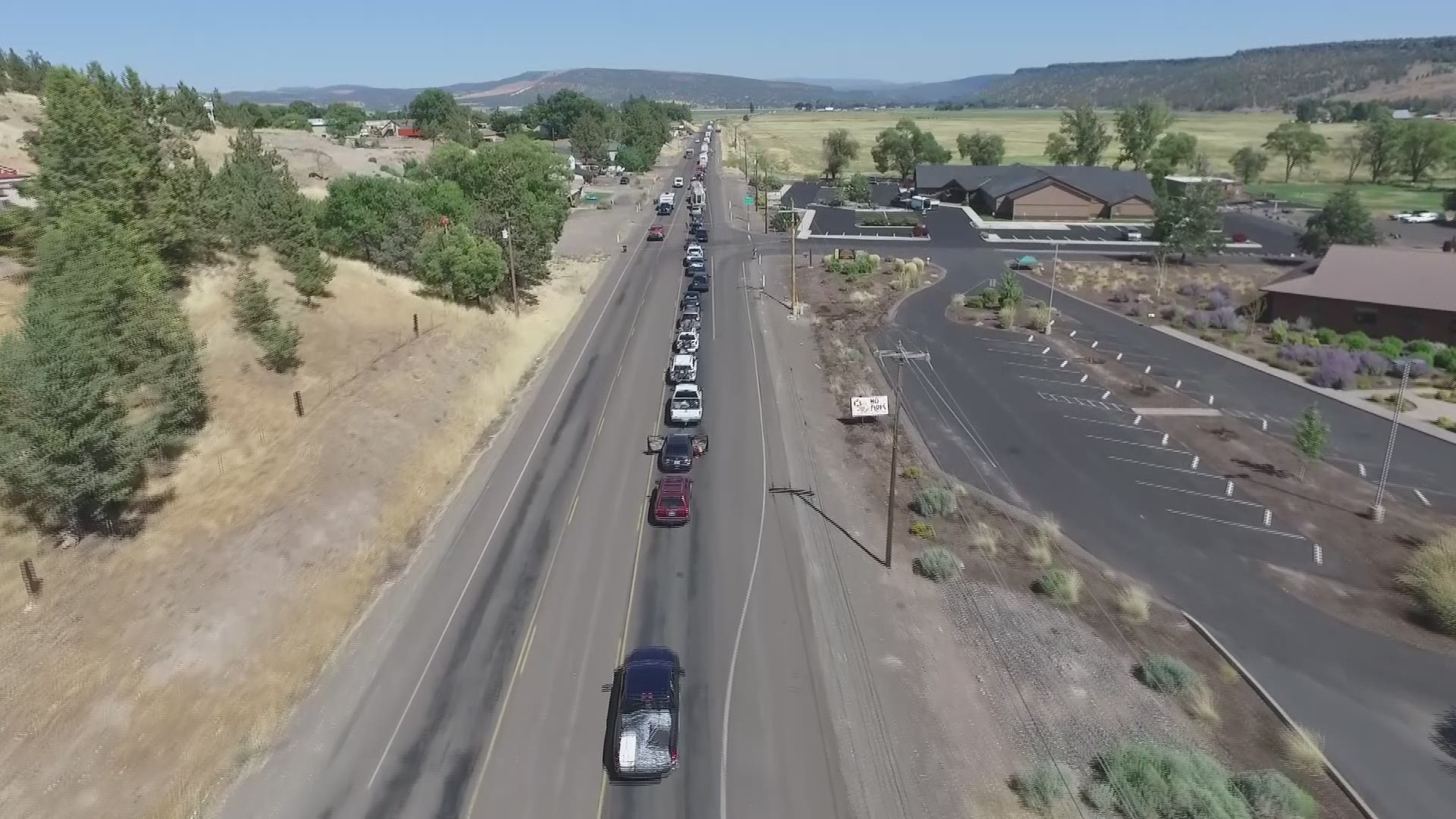 The Deschutes County Sheriff's Office estimated 30,000 people arrived in Central Oregon Thursday and around 40,000 people would show up each of the following three days.

The vast majority of those people were expected to leave Monday and Tuesday.

In Eastern Oregon, Tripcheck showed some delays in the John Day area on Thursday and Friday. Monday afternoon, traffic heading in all directions was slow, but there were no major incidents reported.

Your pics: Getting ready for the eclipse

Photos: Getting ready for the eclipse

1 / 25
From Prineville police, an aerial view of the Symbiosis festival

TripCheck showed traffic was slower than average after the eclipse, but not to the extent of the Salem area or Madras. There was some stop-and-go traffic near Lincoln City.

This is the most traffic we've seen all weekend. It's slow going getting out of Lincoln City #OReclipse2017 eClipse #Eclipse2017 pic.twitter.com/4wRK40yc5a