Historic eclipse turns day into night across the US 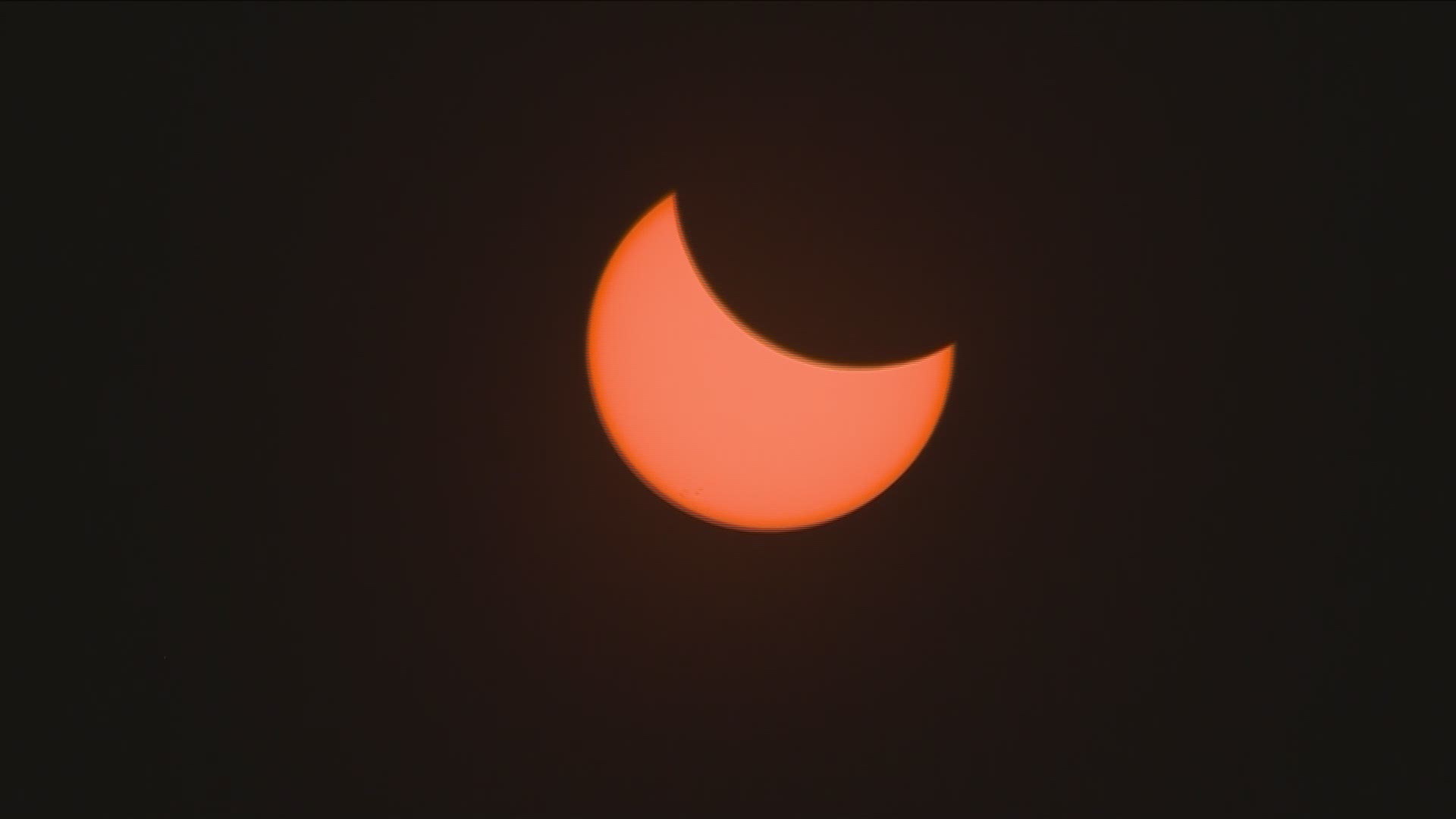 Millions of Americans gazed in wonder through telescopes, cameras and disposable protective glasses Monday as the moon blotted out the sun in the first full-blown solar eclipse to sweep the U.S. from coast to coast in nearly a century.

The temperature dropped, birds quieted down, crickets chirped and the stars came out in the middle of the day as the line of darkness raced 2,600 miles (4,200 kilometers) across the continent in about 90 minutes, bringing forth oohs, aahs, shouts and screams.

In Boise, Idaho, where the sun was more than 99 percent blocked, people clapped and whooped, and the street lights came on briefly, while in Nashville, Tennessee, people craned their necks at the sky and knocked back longneck beers at Nudie's Honky Tonk bar.

It was the most-observed and most-photographed eclipse in history, with many Americans staking out prime viewing spots and settling onto blankets and lawn chairs to watch, especially along the path of totality — the line of deep shadow created when the sun is completely obscured except for the delicate ring of light known as the corona.

The shadow — a corridor just 60 to 70 miles (96 to 113 kilometers) wide — came ashore in Oregon and then traveled diagonally across the heartland to South Carolina, with darkness from the totality lasting only about two to three wondrous minutes in any one spot.

The rest of North America was treated to a partial eclipse, as were Central American and the top of South America.

"We're all part of something celestial — so much bigger than us, so mysterious," said Ed Sullivan, who traveled from Richmond, Virginia, to Glendo Reservoir in Wyoming. "There is so much to ponder I don't even know what questions to ask, but I enjoy just feeling the mystery."

With 200 million people within a day's drive from the path of totality, towns and parks saw big crowds. Skies were clear along most of the route, to the relief of those who feared cloud cover would spoil this once-in-a-lifetime moment.

"The show has just begun, people! What a gorgeous day! Isn't this great, people?" Jim Todd, a director at the Oregon Museum of Science and Industry, told a crowd of thousands at an amphitheater in Salem, Oregon, as the moon took an ever-bigger bite out of the sun.

NASA reported 4.4 million people were watching its TV coverage midway through the eclipse, the biggest livestream event in the space agency's history.

"It's like nothing else you will ever see or ever do," said veteran eclipse-watcher Mike O'Leary of San Diego, who set up his camera along with among hundreds of other amateur astronomers gathered in Casper, Wyoming. "It can be religious. It makes you feel insignificant, like you're just a speck in the whole scheme of things."

Astronomers were giddy with excitement. A solar eclipse is considered one of the grandest of cosmic spectacles.
NASA solar physicist Alex Young said the last time earthlings had a connection like this to the heavens was during man's first flight to the moon, on Apollo 8 in 1968. The first, famous Earthrise photo came from that mission and, like this eclipse, showed us "we are part of something bigger."

With a half hour to go before totality, NASA's acting administrator, Robert Lightfoot, enjoyed the moon's "first bites out of the sun" from a plane flying over the Oregon coast and declared it "just an incredible view."

"I'm about to fight this man for a window seat," Lightfoot said, referring to a fellow NASA official.

Hoping to learn more about the sun's composition and activity, NASA and other scientists watched and analyzed from telescopes on the ground and in orbit, the International Space Station, airplanes and scores of high-altitude balloons beaming back live video.

Citizen scientists also planned to monitor animal and plant behavior as day turned into twilight. Thousands of people streamed into the Nashville Zoo just to watch the animals' reaction.

The Earth, moon and sun line up perfectly every one to three years, briefly turning day into night for a sliver of the planet. But these sights normally are in no man's land, like the vast Pacific or Earth's poles. This is the first eclipse of the social media era to pass through such a heavily populated area.

The moon hasn't thrown this much shade at the U.S. since 1918, during the country's last coast-to-coast total eclipse. In fact, the U.S. mainland hasn't seen a total solar eclipse since 1979 — and even then, only five states in the Northwest experienced total darkness.

The path of totality passed through 14 states, entering near Lincoln City, Oregon, at 1:16 p.m. EDT, moving over Casper, Wyoming; Carbondale, Illinois; and Nashville, Tennessee, and then exiting near Charleston, South Carolina, at 2:47 p.m. EDT.

Joe Roth, an amateur photographer, traveled south from the Chicago area to Alto Pass, Illinois, to catch his first total solar eclipse — on his 62nd birthday, no less. He said the stars aligned for him — "a Kodak moment for me to cherish and experience."

Kim Kniseley drove overnight from Roanoke, Virginia, arriving in Madisonville, Tennessee, before dawn to get a parking spot at Kefauver Park, where by sunrise dozens of folks had claimed benches and set up tents.

He said he could have stayed home in Roanoke and seen a partial eclipse of 90 percent, but that would have been like "going to a rock concert and you're standing in the parking lot."

Scientists warned people not to look into the sun without protection, except when the sun is 100 percent covered.

To avoid eye damage, people were reminded to use special protective eyeglasses or pinhole projectors that can cast an image of the eclipse into a box.