Ohio schools No. 1 in economic segregation

It’s a real crown of thorns – a kingship nobody wants. 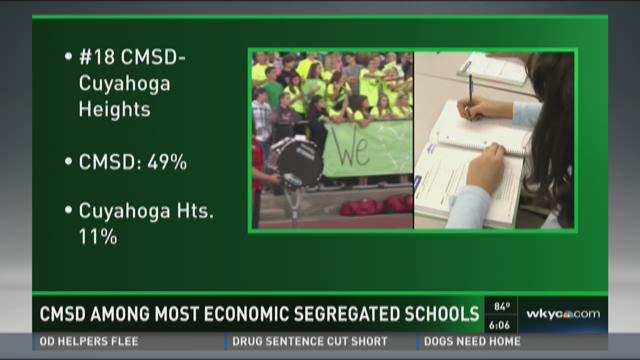 Fault Lines: America’s Most Segregating School District Borders analyzed 33,500 school district borders across the nation. And the Buckeye State has nine of the top 50 most segregated borders – more than any other state.

The CMSD-Fairview School District border ranked 24th with 49 to 11 percent difference, while the CMSD-Shaker Heights District border was 35th, a 49 to 13 percent contrast.

The report was done by EdBuild. The entire dataset and searchable graphics are available online.

Economically segregated schools are a problem because they exacerbate a system of haves and have-nots. In Ohio, especially, since much of school revenue comes from local property taxes, the more wealthy your community, the easier it may be to raise funds for, say, new buildings and better technology.

“When you concentrate poverty, you concentrate the harmful effects of poverty on students,” said Zahava Stadler, EdBuild’s manager of policy and research. “We would encourage Ohio lawmakers to take a really hard look at the way their school district borders are drawn.”

Overall, of the top 50 list, 29 of those borders are located in the rust belt, Stadler said. She thinks that’s partly due to the loss of industrial jobs followed by the flight of more wealthy families. Those who could afford to leave for more prosperous cities or towns did.

Nationwide, there are fewer top-50 borders in the south, which initially was a surprise, Stadler said. However, southern states more frequently have countywide school systems, she said.