CBD oil is currently illegal in Ohio. So what does this legislation mean for consumers and state law? 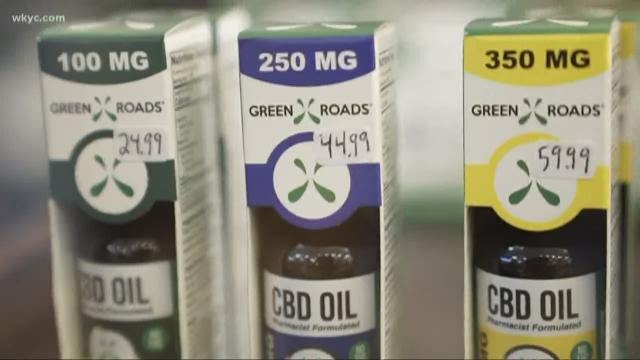 The U.S. Congress just passed an $867 billion dollar Farm Bill.  It still needs to be signed into law by President Trump, but the landside vote of 369-47, gives Ohio farmers money to research and expand organic farming. And in an historic move, it also lets them farm hemp, which is used for CBD oil.

CBD oil has been used for years to treat everything from epilepsy to chronic pain. But it's been illegal, according to the Ohio Board of Pharmacy, unless it's sold through a medical marijuana dispensary. And those aren't open yet.  But people who've been skirting the laws are buzzing over the new bill.

Vince Sanders, who owns a CBD business, says he got into the industry, "After I saw the incredible things that it did. I was so vested I wanted to share it."

Last year, CBD sales hit $820 million. Prior to the Farm Bill being passed, they were expected to reach more than $2 billion by 2020. Now, the business is expected to boom.

Andrew Graves, whose company Atalo Hemp grows and distributes hemp products says, "Now it's a major part of the landscape gaining ground all the time."

Contrary to the stigma, hemp, which is a variety of the Cannabis plant, doesn't produce THC like cannabis does. Therefore, it doesn't give you a high like pot.

In fact, the Drug Enforcement Agency recently moved CBD with THC below 0.1%, from a schedule 1 drug to a schedule 5.

Hemp is most commonly found in clothing and food. But it's also being used to treat anxiety in pets, and helps wean people off pain pills.

Marvin Washington, a retired NFL player who spent many years with the New York Jets, and uses CBD oil says, "For somebody that works out every day and gets inflammation, it's anti-inflammatory."

But it's still illegal in Ohio according to the Ohio Board of Pharmacy, unless it's sold through a medical marijuana dispensary.

Grant Miller, the education and outreach coordinator for the Board explains, "Ohio does not make the distinction between CBD oil extracted from marijuana and CBD from hemp."

But now that the Feds are making farming hemp legal, the Board told us by email that it’s reviewing the pending legislation and determining what impact it may or may not have on Ohio law.

That hasn't stopped stores like Caitos Nutrition in Solon from selling the product, which customers have demanded for years.

Amanda Swanson, who uses CBD oil for anxiety says, “I found that when I take it before bed and then again in the morning, it just really helps me feel calm about my day and then I can focus on the tasks at hand rather than my anxiety getting in the way.”

Even though medical marijuana is legal in Ohio, many people say they still need CBD oil because there are only certain conditions which qualify for treatment under the state’s program. Those don't include anxiety, insomnia among other health problems.

RELATED: Is CBD Oil legal here in Ohio? And does it really work?