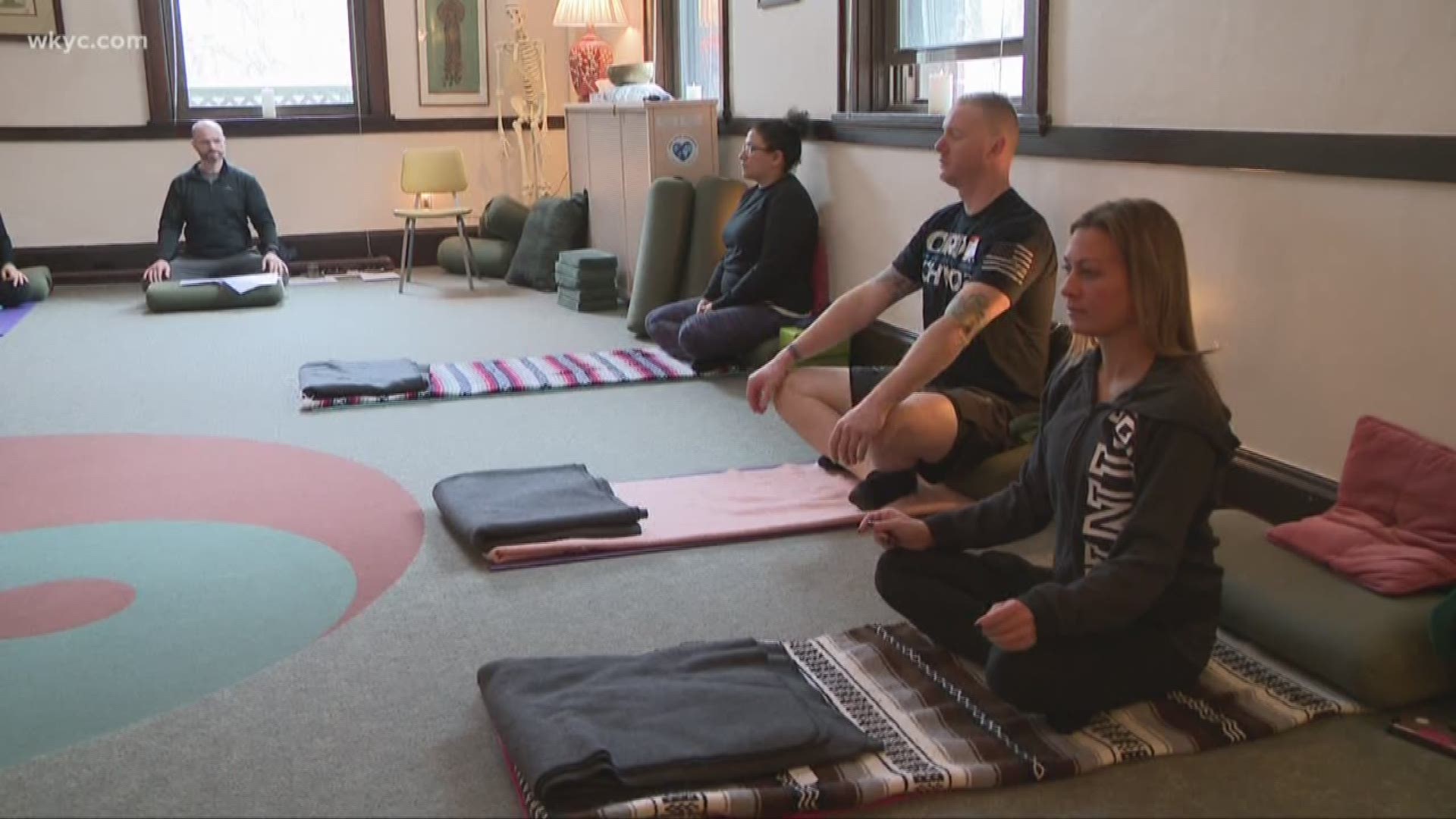 CLEVELAND — There are few jobs more stressful than being a police officer. That's why Cleveland Police are now teaching Yoga and mindfulness in the police academy and allowing current officers to voluntarily learn the practice.

For the second year, Cleveland Police held an five-hour retreat at Rivers Edge in West Park to allow police officers to learn mind calming techniques that will help ease the stress of their jobs and better handle critical situations.

In a zen-like room with peaceful music, candles and plants, about a dozen police officers are sitting on their yoga mats with their eyes closed and calm expressions on their faces. Taking slow deep breaths and just as slowly, releasing those breaths in a controlled fashion.

In the front of the room is Mindfulness teacher Chris Checkett, gently guiding the practice and helping the officers calm their minds and learn how to be in the present. He does this by teaching breathing exercises, meditation, walking mindfulness (focusing on the heal on the ground) and mindful eating (focusing on the food on your plate).

For people who are typically hypervigilant and on the edge of fight or flight more than eight hours a day, it’s an invaluable lesson that allows them to reset their minds, calm their bodies and focus on the situation at hand.

“It helps keep everybody safer and the officers go home with less stress,” Checkett says. “It keeps us from overreacting and helps us process the stress we’re experiencing.”

Five year police veteran, Chris Porter, has a clear understanding of the stress of police work. He lost his brother, Officer David Fahey, in a hit and run two years ago. He immediately saw the value of learning mind calming techniques.

“It gives you that feeling of being even keeled and level headed when you are dealing with people who are stressed out,” Porter says.

Karen Mulcahy is a yoga instructor and teaches the Yoga Warriors program.

“When we move our bodies it sets off a chemical reaction to the brain, quiets the brain,” Mulcahy says.

This is the second year of the program and it’s voluntary for current police officers. So far they’ve trained 146 officers and command staff and 123 cadets. It’s now a regular part of Police Academy Training for Cleveland.

Detective Chris Gibbons is with the departments Employee Assistance Unit and used to work with Sgt. Stephanie Murphy. She regularly practices yoga and used it to help her get through a stressful time in her life and often encouraged other officers to do it with her. She’s now the first female supervisor of the CPD Motorcycle unit and still does yoga.

Gibbons saw the benefits and decided to offer it to the department. He says feedback has been positive and most officers actively use the mindfulness techniques Checkett teaches.

“You don't have to be hostage to these crazy emotional situations that they're gonna go into, you actually have a tool that you can bring a peace and an equanimity into a situation,” Gibbons says.

Porter adds, “This gives you an opportunity to kind of step back and away from yourself and away from the circumstance to relax, calm down and reset.”

There’s science behind the ancient practice, it centers the mind and brings emotional balance by regulating the central nervous system.

“It calms the sympathetic nervous system which can go into hyperdrive when someone is in crisis or highly stressed,” Checkett says.

Gibbons says there’s an effort to move away from “warrior mode” and back into “guardian mode” for police officers. Learning these techniques may help diffuse a situation before it gets out of hand.

“It maximizes our potential to bring peace, I mean we are peace officers, to any difficult situation,” Gibbons said.