New York Gov. Andrew Cuomo will not attend Buffalo Bills game; will give ticket to nurse

Gov. Cuomo said he will need to stay in Albany this weekend to work on rewriting the State of the State address, in light of U.S. Senate Elections in Georgia. 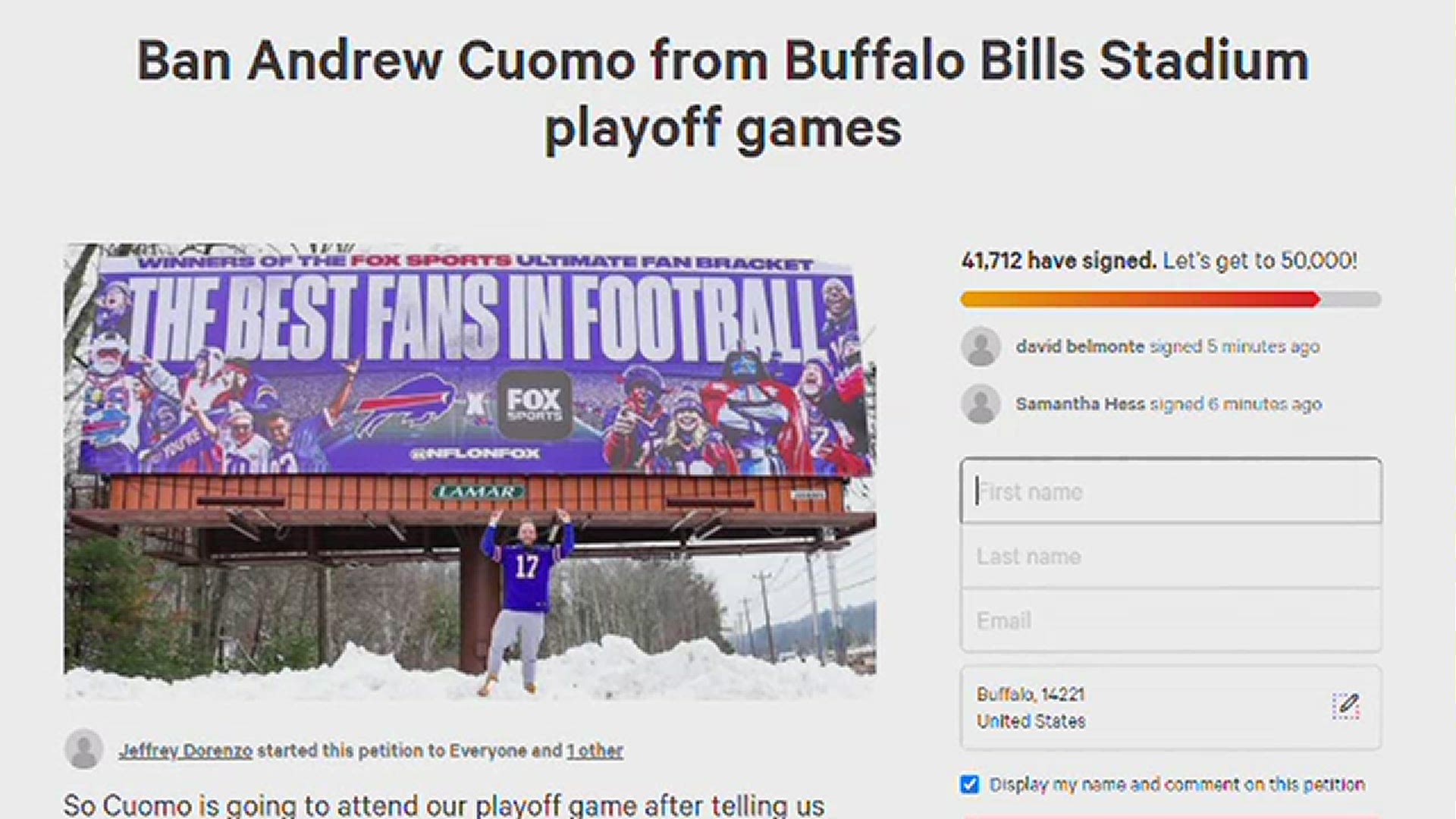 ALBANY, N.Y. — Governor Andrew Cuomo will not be attending the Buffalo Bills playoff game against the Indianapolis Colts this weekend after all.

It wasn't this on line petition which reached close to 42,000 urging that the governor be banned from attending the game, that effected his decision not to come, but instead the results of the runoff elections for two U.S. senate seats in Georgia, both of which appear to have gone to democrats.

"I am happy today!" the Governor giddily exclaimed, during a Wednesday morning news conference.

He is happy because, with his fellow democrats poised to take control of both houses Congress and the Whitehouse, it bodes well for his long sought after federal government bailout of New York State, where the deficit under his tenure as governor had ballooned to $6 billion prior to the pandemic, and has grown to one a half times that amount since the onset of Covid-19 less than one year ago.

"It's the largest deficit in the history of the state," the governor said.

Cuomo, who has been Governor of the state for 10 years, continues to blame the state deficit on the federal government, and not his own policies enacted over the past decade.

"Washington has been the enemy of this state," declared Cuomo, even going so far as to describe New York as a "crime victim".

Cuomo, along with blaming Washington, will now count on it to bail out the state, and now anticipates that it may due to the changing Congress and administration.

Cuomo had earlier indicated that closing the record deficit would likely require massive tax hikes, cuts in state services, and layoffs...which he might be off the hook for now with the increased chances of his hoped for federal bailout materializing.

Cuomo spent some time as well talking about the Covid-19 vaccine and pledged that the state will do better in what has been a discouraging rollout of the vaccine in New York so far.

Under the vaccine program, the federal government sends the vaccine to the states, and the states then decide how best to get it into people's arms.

According the CDC, despite the federal government having sent more than 900,000 doses of vaccine to New York, the state has only managed to get about one third of that amount used.

However the governor insists state's sluggish rollout is staring to roll faster.

"The daily rate of vaccinations over the past three weeks was about 10,000 hospital staff per day," noted Cuomo. "But since Monday they've been doing 30,000 per day."

Cuomo directed that high risk hospital workers in New York be first in line to receive the vaccine, and continues to say it may be months before the general population of the state might have a chance to receive it.

Far from waiting months like in New York, seniors in Florida are now being inoculated at several sites throughout the state,  at a rate of 1,000 per day per site.

Meanwhile, Cuomo said New York's 'holiday COVID hangover' continues. Statewide, the number of hospitalizations, those in ICU and patients who are intubated, are all up.

There were 161 additional deaths over the past day, adding to New York's nation leading total. The state is also has second highest death rate per 100,000 residents, exceeded only by neighboring New Jersey.

In the Western New York region, which includes Erie, Niagara, Allegany, Chautauqua and Cattaraugus counties, 540 people or .04 percent of the population is hospitalized with COVID-19.

The Finger Lakes region, of which Genesee, Wyoming and Orleans counties belong, remains a flashpoint with 934 people hospitalized. This equates to .08 percent of the population, which is the highest percentage of people hospitalized - in terms of an area's population - in any region of the state.

Cuomo said the state's three priorities remain slowing the spread of the virus, increasing vaccine distribution and stopping viral mutations, such as the one now confirmed in New York that has been traced back to the U.K.

The governor revealed that contact tracing has showed the mutated case of the virus, reported out of Saratoga County, has now been traced back to having a connection to someone who had traveled to the U.K. Cuomo said he sent a letter to federal officials Wednesday calling on the U.S. Customs and Border Protection to test anyone for COVID-19 who comes into New York from out of the country.

On the vaccine front, Cuomo said the number of healthcare workers receiving their first dose has tripled since Monday. Over the past three weeks, nearly 11,000 vaccines a day were being given out. Since Monday, that number has jumped to over 31,000 per day.

An ongoing survey of hospital staff shows that 85 percent have been willing to get the vaccine so far. In addition, the governor said it's expected that all staff and residents of nursing homes across the state are expected to have gotten their first dose over the next two weeks.

Today's update on the numbers:

Total COVID hospitalizations are at 8,665.

Sadly, there were 161 fatalities. pic.twitter.com/pUru3yIKhr