Bars & restaurants were allowed to reopen for outdoor serving on Friday, but not everyone was adhering to guidelines. 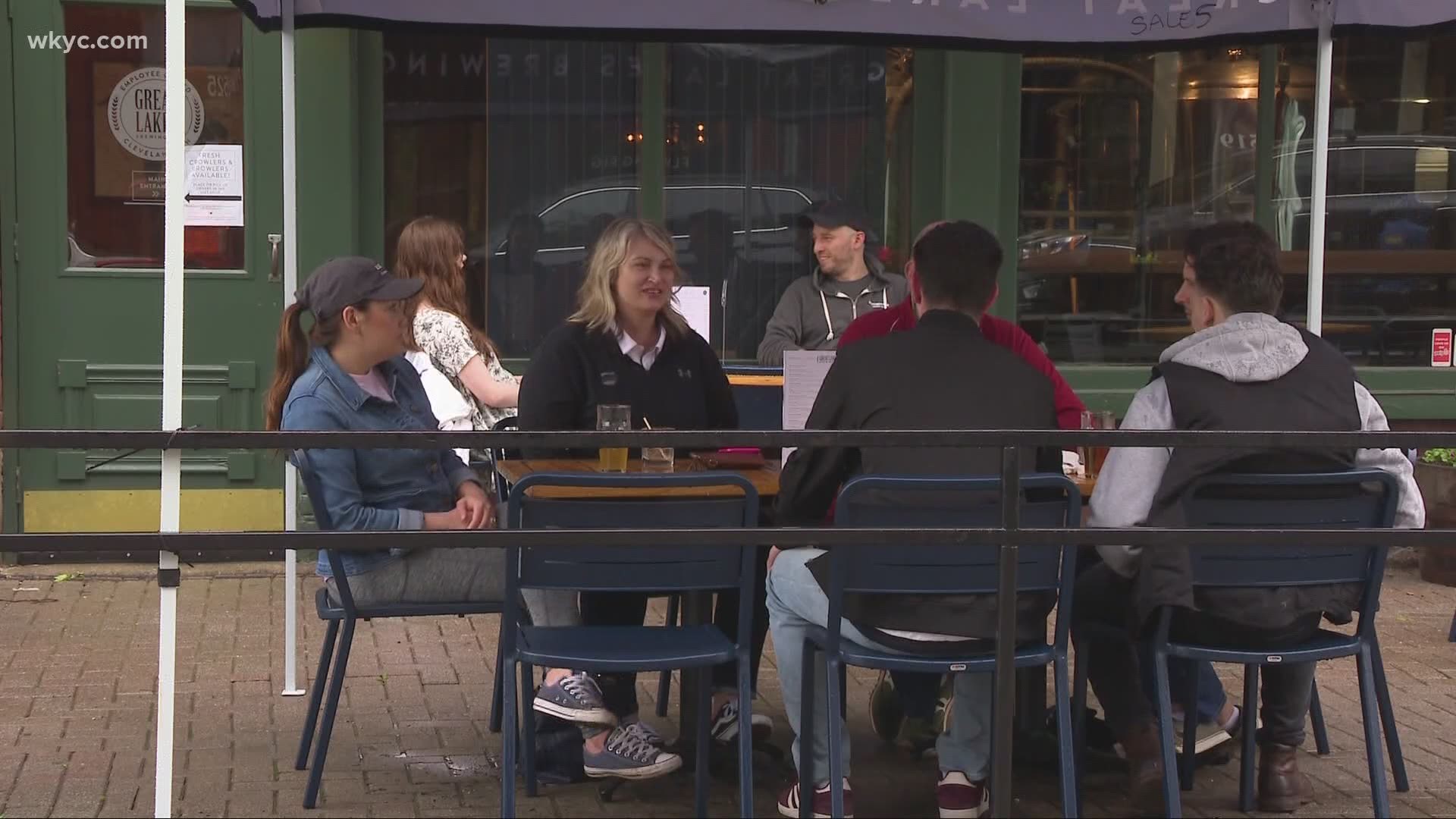 COLUMBUS, Ohio — In his own words, Gov. Mike DeWine has "always tried to be blunt," and he did just that on Monday when speaking about Ohio's bars and restaurants.

Those establishments were allowed to reopen for outdoor dining last Friday after being shut down for months to stop the spread of the coronavirus. In order to conduct business again, the businesses must adhere to strict social distancing guidelines, including spacing out tables at least six feet apart and limiting the number of customers on the premises.

DeWine says the vast majority of restaurants are "doing an amazingly good job" following these protocols. However, there were also outliers, notably Standard Hall in Columbus and Lago East Bank in Cleveland. Photos at both locations showed customers shoulder-to-shoulder on patios, with little (if any) concern being given to social distancing.

DeWine made his displeasure at such situations known over the weekend and again today, and is now threatening those establishments who don't follow the rules with legal action. Accordingly, the governor has decided to gather law enforcement officers from across the state into the Ohio Department of Public Safety's Investigative Unit. These officers will perform compliance checks on crowded bars and restaurants and have the ability to issue administrative citations, which could result in the businesses having their liquor licenses revoked.

"Protocols, the rules for reopening bars and restaurants, were laid down very, very clearly," DeWine said during his press conference, adding these guidelines were drawn up by a team of both restaurant owners and medical experts. "Our economic recovery is tied directly to how successful we are in preventing the spread of the coronavirus."

The governor took time to read a portion of his order (signed by Ohio Department of Health Director Amy Acton) that allowed restaurants to begin reopening, specifically the portion about social distancing. He also noted a section that read, "Customers must be seated when consuming food, beer, wine and liquor on the premises of the business," something not all customers at Lago or Standard Hall appeared to be doing.

Locally, Cleveland Mayor Frank Jackson announced on Monday that Cleveland Police responded to 28 calls regarding mass gatherings over the weekend, at both residences and businesses.

In addition, Cleveland Police and representatives from the Cleveland Department of Public Health visited the four restaurants/bars with the most complaints.

RELATED: Cleveland Police respond to nearly 30 reports of mass gathers over the weekend

“Violating the State’s guidelines for the reopening of businesses is something the City of Cleveland takes very seriously,” said Mayor Jackson. “We will continue to monitor this situation and will be developing a policy to address the actions of habitual offenders.”

In a statement issued Sunday, Lago claimed the photos of its crowded patio were taken out of context and that it did not believe its employees had the "responsibility" to control the crowd. Though he did not mention Lago by name, DeWine disagreed strongly with that sentiment.

"The people who were running [the crowded bars] were not taking responsibility," the governor declared. "If they cannot control the environment, they should make the wise decision not to open."

Lt. Gov. Jon Husted echoed those sentiments, stating that officials did not want to take strict enforcement measures but would if necessary.

Some fear DeWine has moved to fast on reopening Ohio's economy, and restaurants in particular will be allowed to start dine-in services again on Thursday. Despite these concerns, the governor says his administration has no choice by to start moving forward, likely due to the fragile state of the economy.

GOV. DeWINE: We will do 'whatever we have to do' in enforcing safety measures for businesses