Unemployment claims in the state jumped more than 180,000 last week, according to the Ohio Department of Jobs and Family Services. 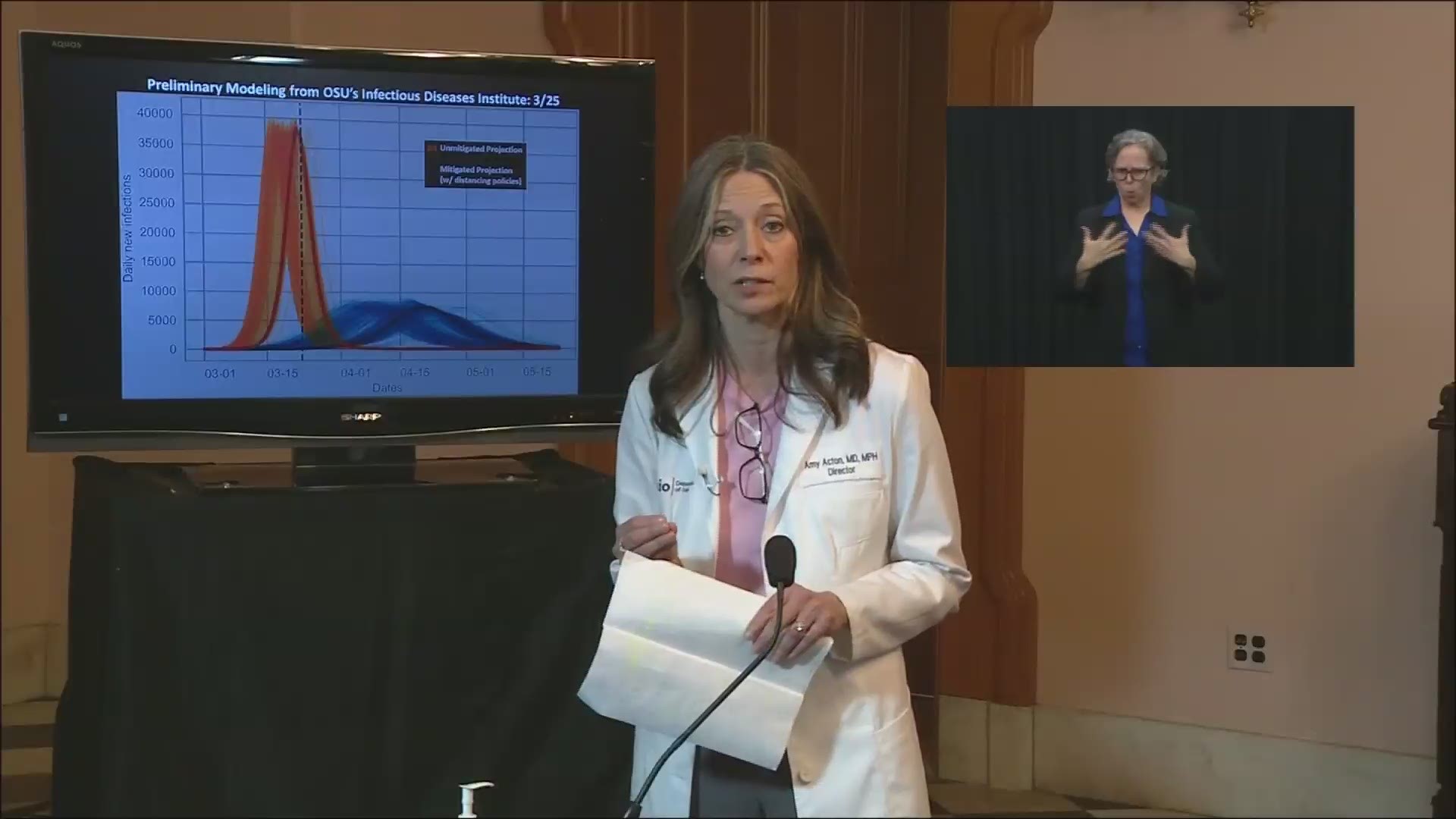 COLUMBUS, Ohio — Gov. Mike DeWine held his daily briefing at the Ohio Statehouse in Columbus to provide an update on the state's response to COVID-19.

The Ohio Department of Health announced that there were 867 confirmed cases of coronavirus in Ohio. 15 people have died and 223 are hospitalized, including 91 in ICU.

With cases and deaths trending upward -- and not projected to peak until late April or early May --  DeWine stated on Thursday that it's not a matter of "if" but "when" the state will need more space for patients.

RELATED: Ohio Gov. Mike DeWine says hospital capacity will have to get 'a lot bigger'

DeWine was joined by Ohio Department of Health Director Dr. Amy Acton. For weeks, Ohioans have heard her use the phrase "flatten the curve" in regards to helping delay the spread of the coronavirus.

On Thursday, Acton showed the progress the state is making in doing just that.

In showing Ohio's first projected coronavirus curve -- which is based on still limited data -- Acton revealed that the state's peak is currently slated to reach as many as 6,000-8,000 new cases per day in late April. While jarring, those numbers are preferable to the projections for the state had it not put social distancing measures in place, as that model shows Ohio would currently be peaking with as many as 40,000 new cases a day, a number that would have overwhelmed the state's health resources.

DeWine and Lt. Governor Jon Husted also addressed unemployment claims in Ohio, which jumped more than 180,000 last week, according to the Ohio Department of Jobs and Family Services.

The U.S. death toll from coronavirus passed 1,000 Wednesday night, according to Johns Hopkins University. Approximately 25% of those are in New York City

The number of worldwide coronavirus cases is nearing 500,000.

RELATED: VERIFY: What COVID-19 stands for

RELATED: As temperatures warm up, Cleveland Metroparks is reminding you to use safe practices while outdoors

RELATED: VERIFY: Yes, a sudden loss of smell or taste might be an indicator of COVID-19

RELATED: Gas prices plummet in Northeast Ohio: Where you can find it for nearly $1 per gallon