As soon as this week, Ohio could see its first counties reach a Level 4 'purple' coronavirus risk level of its Public Health Advisory System. 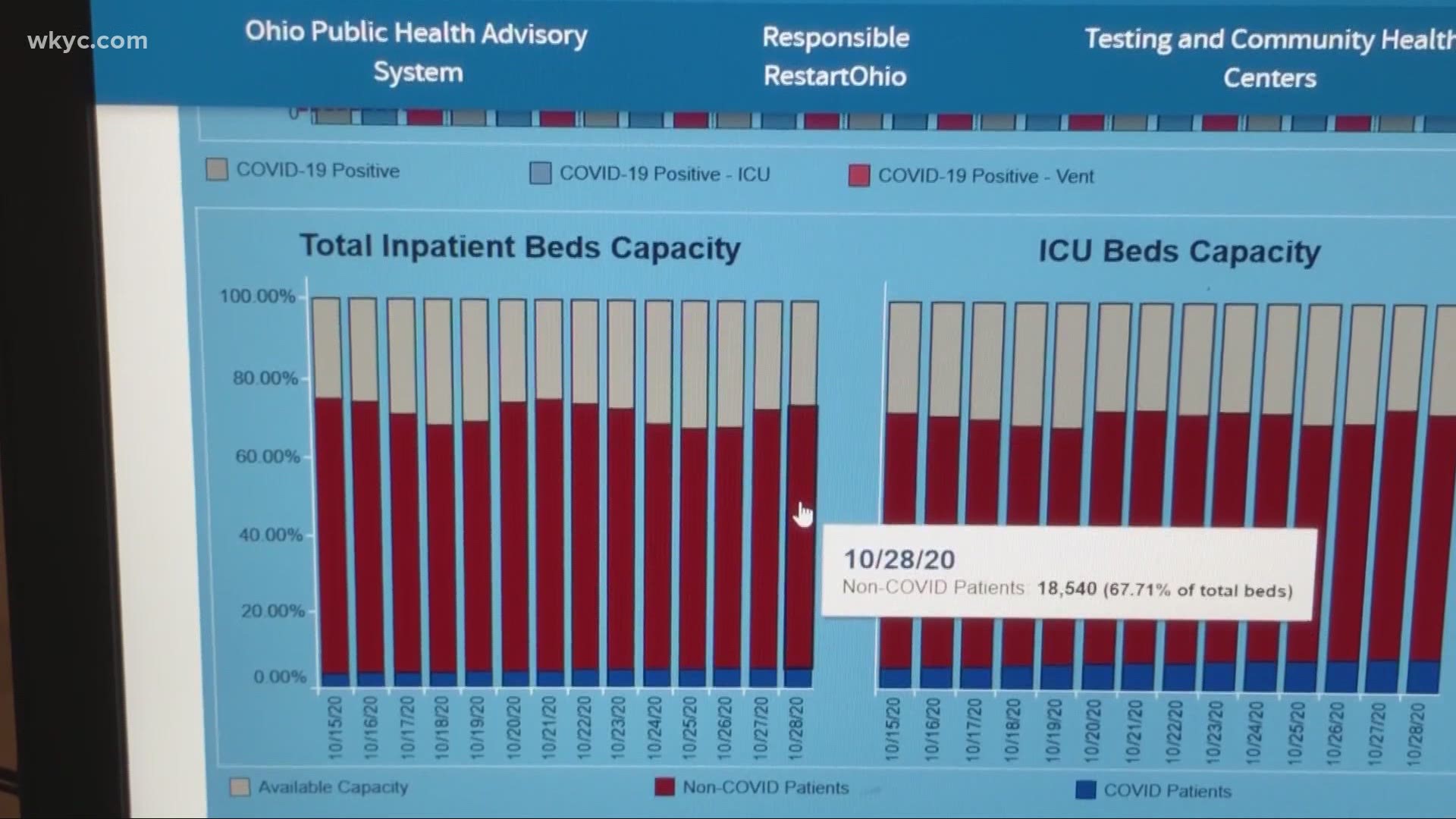 CLEVELAND — Since Ohio first introduced its color-coordinated coronavirus (COVID-19) Public Health Advisory System in July, no county in the state has reached Level 4 "purple" -- the highest level on the scale.

That could soon change.

As Ohio's coronavirus numbers continue to surge, the state now finds itself with 38 of its 88 counties at Level 3 'red' -- up from 29 counties that were in 'red' a week ago. Of those 38 red counties -- which account for 74 percent of the state's population -- three find themselves approaching Level 4, including Cuyahoga County, Clark County and Hamilton County.

While being placed on the Level 4 watch list means that county's current coronavirus numbers qualify for a 'purple' designation, it takes two consecutive weeks of carrying those numbers before the county is officially placed at Level 4. In other words, if Cuyahoga County, Clark County and Hamilton County's numbers don't improve by next week, they will become the first counties to be labeled as "purple" since the advisory system was introduced four months ago.

So what does that mean?

While the official advisory system states that Level 4 denotes "severe exposure and spread" of the coronavirus in a community, there aren't currently any mandates or orders that would be triggered by a county reaching 'purple.' Rather, DeWine reiterated the advisory system currently offers guidance to "stay at home/necessary travel only" in any Level 4 county.

That, however, isn't to say that new guidance, or even restrictions, might be added in the days or weeks to come as Ohio has yet to have to deal with the realities of a 'purple' county. Last Thursday, DeWine said he believed Ohioans would rise to the occasion and increase their safety measures such as wearing masks, but also noted earlier this week that he hasn't ruled out another potential economic shutdown to help slow the spread of the coronavirus.

"I don't look for us to get to that point," DeWine said during an appearance at Cleveland's Burke Lakefront Airport. "I've said I would never rule things out because I can't make up scenarios. But that's not where we want to go, that's not what we want to do."

To reach Level 4, a county has to hit at least six of the state's seven COVID-19 spread indicators (such as rising cases, hospitalizations, and deaths) in at least two consecutive weeks. DeWine will announce this Thursday of any of the three aforementioned counties hit that dubious milestone.

Per Ohio's guidelines, a state that reaches purple must hit less than six of those indicators for two consecutive weeks to drop back down to red or lower.